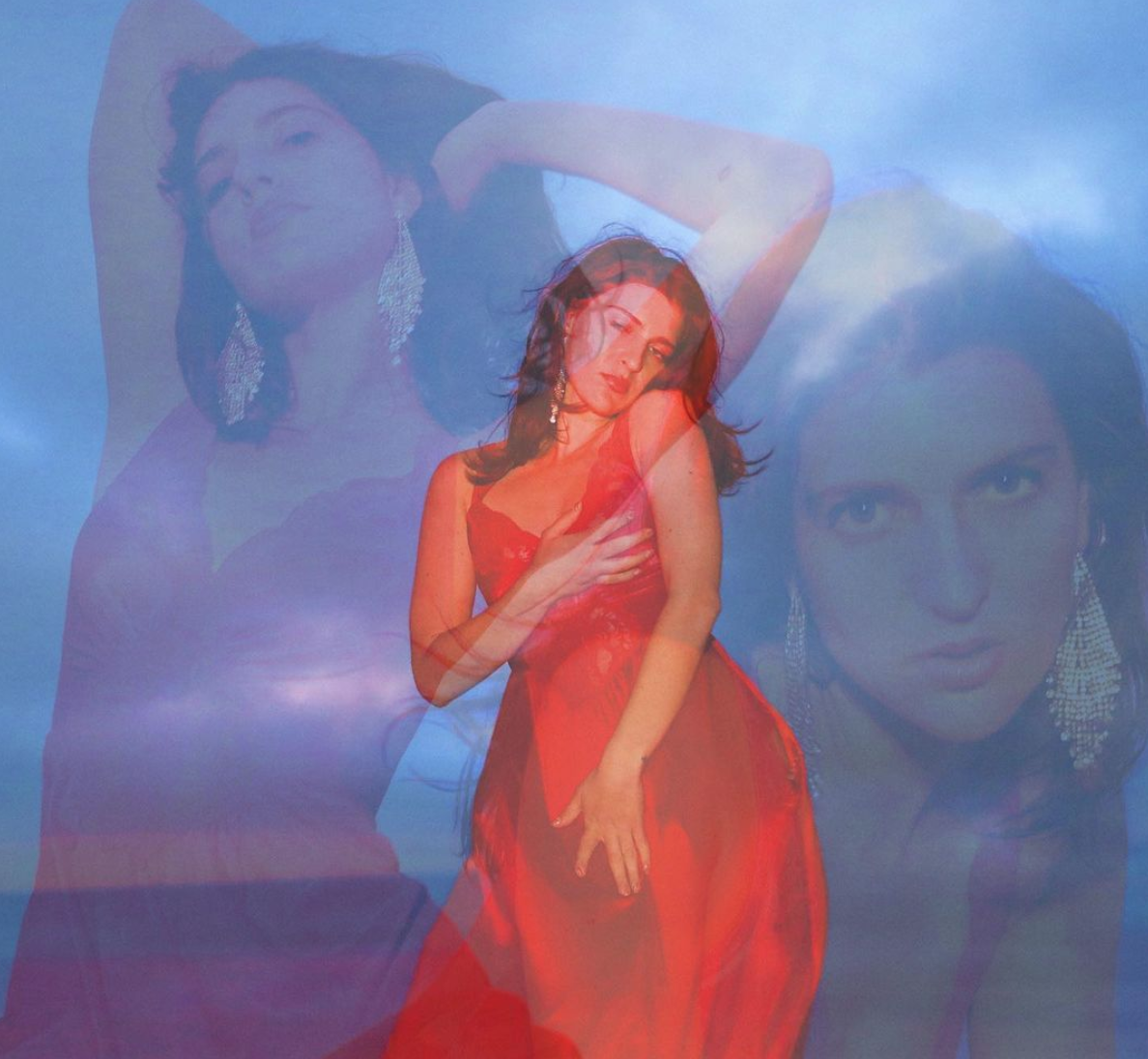 I first heard Revenge Wife's "Earthquake" on a virtual release party for Disco Shrine, it was the height of the pandemic, and I hadn't been to a show in what felt like ages. As soon as I heard that song, I was hooked. Revenge Wife's instantly catchy melodies and delicate vocals are entirely original. It's like nothing else, and her visuals are stunningly complex. She really tells a story with her music. We talked to her about her new EP, aptly titled "Background Songs For Your Boring Life, Part. 1," building communities instead of competition, and her upcoming show that we're dying to go to.

When did you come up with Revenge Wife?

Revenge Wife: I guess I started working on Revenge Wife in 2017, and I was just discouraged. I felt like there were just so many obstacles in what I wanted to do with HOLYCHILD and what we could do. So I was like, "Fuck this, I'm just going to write for my own project and not put any pressure on it and see what happens." So I started writing like four years ago. I had a lot of songs, and I knew I wanted to put them out, and I wanted it to be this other thing, and I didn't want to be doing the pop machine anymore. It's been really fulfilling because it's like when you're like, "I'm going to go to Europe by myself and travel through everywhere." You're like, "How the fuck am I going to do that? Where am I going to stay? What am I going to do?" And then you do it, and then you're like, "I did that," right? I never really thought I've ever been, but every step of the way, I'm like, "How am I going to pull that off?" I feel that way right now about my show. I'm like, "Okay, I've got a show. How am I going to do that?" But I don't know. It's fulfilling to do those things.

I feel like that must be such a scary thing to do. You don't know how it's going to be received. I feel like once you have that talent, though, it's so easy to translate it to your own thing.

Revenge Wife: Yeah, but it's hard. We're all scared of failure, and I feel for me, it felt like even though no one gives a fuck about me, in a way. I feel like there's so much fear of failure when we have so many expectations. So I had my expectations of the past, and now it's like, "Okay, how can my new project not have those expectations? And how can I not be fearing failure or what I perceive as a failure?" That gets in my way, rather than, "I love these songs." And I wrote so many. It's pretty easy to pick some good ones out of 70. I mean, I love them all.

Do you feel like there's a lot of pressure that you had to deal with just releasing "Earthquake"?

Revenge Wife: I think maybe it was more internal pressure where I was like, "What is this going to be? And it has to be so good so that when people see it, they can take me seriously." And to a certain degree, I'm very strategic about my releases. Get it ready, make sure all the things are there, make it as good as it can be so when you do a release. But I think I did have some internal pressure. Now I'm like, "Okay. I've just got to keep going and keep doing it."

What kind of is one of the main things you're excited about releasing this EP?

Revenge Wife: I'm excited to release the EP. My initial plan was to drop a full album, no singles at all, but I was like, I have to release this song. I feel like the EP's five songs, so five songs together is a good vibe for what I'm doing right now, so I'm excited about that. I really like it, so I'm really happy about how that came out.

I feel like you're such a visual person, and I feel like all your videos have such a unique aspect to them.

Revenge Wife: I do it all myself. For the video, I just shot, it's for the single; I was able to bring in a DP and have a producer and stuff, but I have it all in my head. It's been such an evolution. I started directing in 2013, so I have been directing for a long time, and that's my side thing. I'm at a new place in my directing right now where I think I'm considering stories so much more than I used to because when you're directing these videos, you don't need to consider a story. You're like, "What does it look like? Does it look cool?" That's all edited together. You're good. And a lot of my early music videos were that, and so now, my shots are dictated by the story, and that's because all of these videos are trying to tell an ever so loose narrative.

I love that. That's definitely a vibe. Do you think that having that in your arsenal? I feel like that's such a rare double talent to have. Do you feel like that helps you as an artist? Do they influence each other?

Revenge Wife: They definitely do. I mean, the main way it helps me is it makes me feel a little bit more balanced because if I were only to write songs, that's only using this one side of my brain, and I love that side of my brain, but I like to have the visual. I mean, you can see with the film you're editing, producing all these logistical things. I think that that's how it informs. I think it makes me feel more balanced. I feel like we have such unrealistic expectations for artists right now in that they're supposed to be good at doing photoshoots, and they're supposed to be good at doing their visuals, and they have to do this, and they have to do this. The days of just a musician are kind of over, and I feel for people because I know not everybody expresses themselves in all mediums. So I really feel for those artists who are less visual.

Do you ever get bogged down with the social media part of being an artist, or do you not worry about that?

Revenge Wife: I get exhausted by it. I don't love it. I don't really want to do it. I'm kind of thinking maybe I don't have to do it as much. Maybe my art will be able to speak for itself. Artists like Lorde are really inspiring for that reason. She's not doing social media, and she just kind of does her stuff. She also evolves a lot as an artist, from one album to the next. That's inspiring to me. I do love the visual aspect of my life. I love taking photos. I love doing that stuff, so it's fun to post, but I don't know. Who likes social media?

I've always said, if I had to be a pop star, I would want to be Lorde because she drops an album, and then she just disappears. And there's this mystery around that. And I think social media does take a lot of the mystery out of things. What do you think has been the biggest challenge for you as an artist, especially someone who's been in the industry for this long?

Revenge Wife: I think my biggest challenge is recognizing my worth and feeling like I deserve certain things and not shying away from those things that I really feel that I deserve because there are so many ways that the other side of my brain tells me. It's an exploited world for everybody. For women, for anybody. Unless you're a billionaire, you're probably getting exploited. It's hard to be like, "You know what? I'm being exploited right now," or, "I should get paid more," or, "I should have this opportunity for me because I'm worth that," and that's something I'm trying to work on now.

And your upcoming show, I know I saw you at that event, but is it kind of your first one on your own? So are you nervous?

Revenge Wife: I am pretty excited. I'm almost done confirming the band. It's all women. Like, W-O-M-X-N. Yeah, I'm so excited. I think it's going to be pretty fun. We're doing some ABBA covers, which I'm stoked about. I think it's going to be a good time. I'm not that worried about it. It's women and non-binary people, and I'm just so excited to have that on the stage, and everybody's going to be wearing matching costumes, the band. And there's a dress code. The dress code is grunge disco, whatever that means to you.

I love that. I feel like that sounds like such a safe space, too. I get nervous at shows sometimes because if it feels like the vibe's off but having a band of women, non-binary people, it just feels nice for the concert-goer. I feel like you are the definition of the tide lifts everyone, you know what I mean, type thing. Like with Disco Shrine and Magdalena Bay, I feel like all of you are just doing so much to support each other. Can you kind of tell me about how you all sort of started working together?

Revenge Wife: I think it's true. There are so many inspiring artists in LA. I mean, everybody's killing it and making music that I'm just like, "Oh my god, I love this." And it's amazing to support each other. I just love that so much. It makes me feel so good having that community. And yeah, we all just know each other. I actually know Magdalena Bay through Disco Shrine, and then I know Disco Shrine through some other mutual friends. But it's pretty great. A lot of my friends are really inspiring artists. Having some people that we can talk to and be like, "Hey, what are you going through? I just went through this. What do you think about that?" Actually, Disco Shrine and I, over quarantine, we would do business meetings, and we would meet up, and she would tell me her plan, and then I would tell her my plan for the next few months, and then we would be like, "Oh, you should do this. You should hit up this person." And it's really nice to do that for each other.

I love that because I feel like people think everything's so competitive, but I love that it's more like a community. Everyone's helping each other.

Revenge Wife: I feel like it's kind of what you make of it. If you want things to be super-competitive, there could definitely be like that if you're feeling-- that's your vibe. I've met people, but it's usually like they're 20, and you don't get it yet. With music, it's kind of harder to be competitive because unless you're ripping each other off, which people aren't usually doing, everyone's doing their own thing, so it's hard not to see that there's room for everyone.

What would you say is kind of your best piece of advice for younger musicians entering the music scene? What would kind of you want them to know?

Revenge Wife: I would say music is first. Songs, that's the driving thing. I know we're in this world where there are all these other aspects like TikTok, and whatever, so I think really focusing on song-writing at a younger age is really going to put somebody ahead.