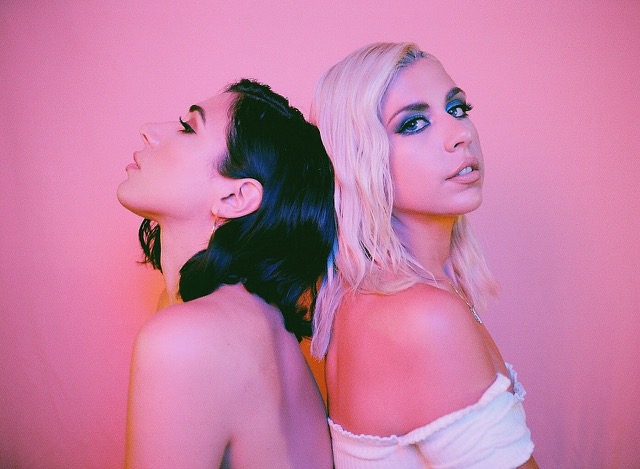 RUUMER, the dynamic sister duo with sparkling pop sounds is just off the release of their song "Gimme Some" and they're definitely not stopping. I talked to them about Catholic school, staying motivated, and what's coming next.

So, how did you get started?

Melis: We’ve been singing and acting since we were both 3 years old. We’re sister which some people don’t know. We both came from a very musical family.

Jess: We started in musical theater, when I was 12 and Melissa was 15 we started writing and recording in the studio. The minute we got into the studio we fell in love and knew that’s what we wanted to do for the rest of our lives.

Melis: We started with musical theater and we grew up in Connecticut, so we were always coming in and out of New York City. We met a vocal coach and her husband was a producer and she told us we had really great pop voices and we wanted to record and she got us into the studio. We've been doing it ever since.

Tell me about your new song “Gimme Some" what's the story behind it?

Melis: It’s featuring Sammy Adams, he's an awesome rapper and we got hooked up with him through our producer Smarter Child who we wrote the record with.

Jess: It’s all about empowering women’s sexuality. We grew up going to a private Catholic school our whole life, and it was tough finding your sexuality in that environment. It was very oppressive and rigid.

I went to Catholic school too, do you remember weird rules or things people told you?

Jess: I remember they handed us a three-page pamphlet with questions about impure thoughts and I remember thinking I was going to hell.

Melis: I remember confessing things, we had confession during school hours and it was mandatory. That really sparked that song for us when we started writing it. We had this gospel-inspired beat and thought it was a cool way to do that topic. It’s a satire on the sexual oppressing environment of our youth. For the music video, we worked with an amazing female director MK Schneider. She’s really involved visually with us. We came up with these competing visuals of women doing stereotypical sexy things but then go against it. We wanted to throw a wrench in the stigma of how women should act and how we should feel demure or embarrassed about our sexual desires.

Jess: Navigating the business is tough. There’s no right or wrong way to do things. You never know what’s going to stick and what’s going to be the thing that launches your career. It’s a tough business. Especially being a woman, it’s tough because I remember so many instances where it’s like, “Oh come to a meeting here but just you Jess, Melissa doesn’t need to go,” and it puts you in an awkward position. There being two of us helps because we’re never alone.

Melis: We’ve always wanted to create music that we feel passionate about it, we’ve come to a point where if we feel like the song accurately represents us and what we’ve created is something we’re passionate about. We just hope people connect with it, especially women navigating through the situations we’ve been through. The creative process is the easiest part.

Melis: And the rejection.

Jess: Out of 100 people if one person says “yes” that’s the main thing.

Melis: This is what we love and we’ll keep pushing forward and maybe from the outside people don’t understand the rejection side of the music industry.

The creeps and the rejection are the worst. How do you stay motivated?

Jess: For me, you see love and passion that we have for music. There’s something inside us and we can’t live without it. That pushes us to continue to do it and from when we were little girls, we’d look up to artists. It’s the only thing we’ve ever wanted and seen ourselves doing in the future. IT’s like a marathon you have to keep running and there will be people that tire out and if we keep pushing and powering through we’ll get there.

Melis: We’ll be releasing more music. We have a follow-up to “Gimme Some” called “Downtown” and we just shot a visual for it. We did that with MK Schneider. It’s an homage to New York City and we’re excited to get that out.

Melis: I would say, just stay true to you and do what makes your heart and your soul happy. Always follow your dreams as cliche as that sound but if something is pulling you towards this goal and this dream, then that’s what you should be doing and what you should be pursuing. DOn’t be afraid to fail and try new things and express yourself in ways that are different.

Jess: Just be unapologetically yourself. You don’t need to validate yourself to anyone else, as long as you feel good about you.