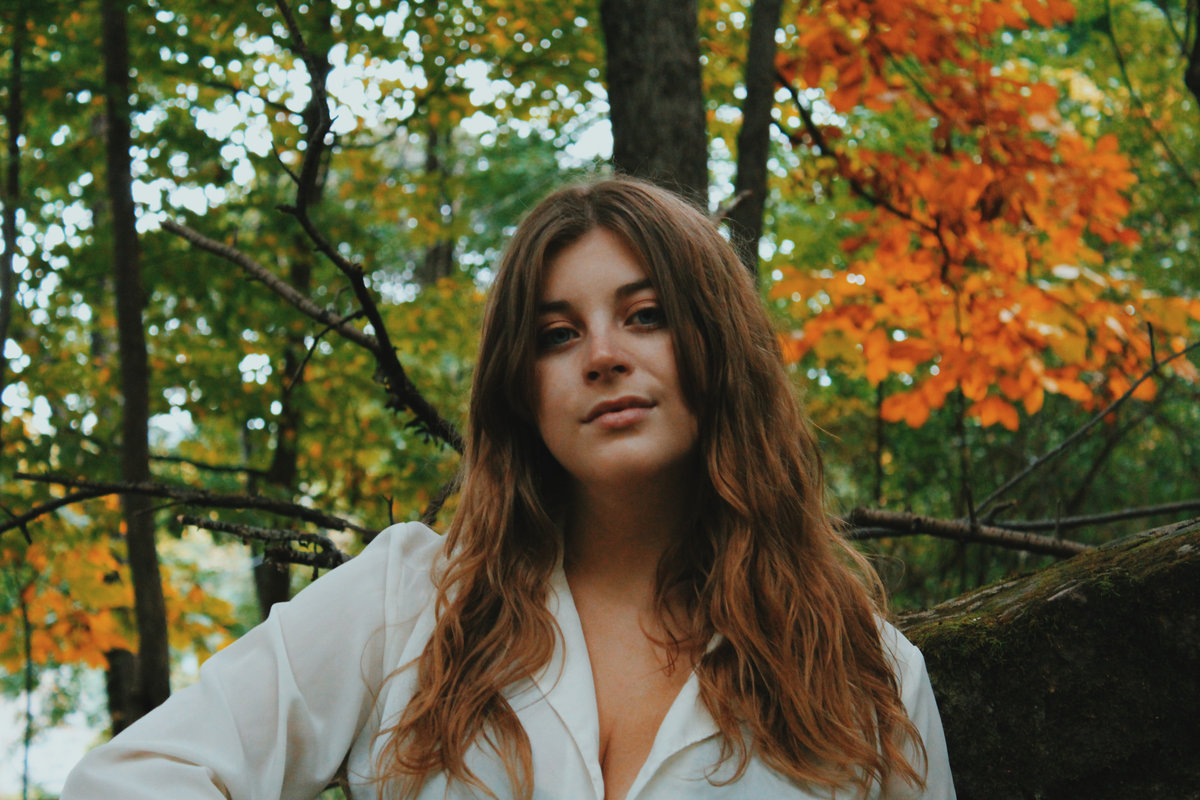 When I first heard Sarah Gross on her song "Arizona" I was floored by her voice. It's sweet and light but the way her voice hangs on to each word it's captivating. Her songwriting is poetic and relatable and we're betting she's going to be big deal. We talked to her about the album, how corona changed her sound, and the pressure of creating content.

Sarah: So I think it was high school. I was a big theater kid in high school. And one of my producers actually came up to me, and she was like, "I'm friends with your mom on Facebook. She reposted your original song." And it was the first real song that I ever wrote, and I was so proud of it. And she was like, "You can do this for real. This could be your job one day." So her husband and her daughter run a studio on Long Island. I was 15 at the time, so I've been recording with them ever since.

When was that kind of shift when you were like, "Okay, I guess this is my career now?"

Sarah: For a long time, I always thought that I was like, "I'm going to be a producer. I'm going to be an audio engineer," I mean, behind the scenes, and it's a more steady job than performing. And I think that's just kind of what my parents wanted to hear. And then I would be in the recording studio with other people. Then I realized that I wanted to be on the other side of the screen. And then I think that kind of happened in my freshman or sophomore year of college. And just the fact that once I got to college, I realized people actually like original music. And on Long Island, no one really wants to hear original music. They just want to hear Billy Joel. It sounds very stereotypical, but it is so true.

I love that. So, tell me about the inspiration behind your new album?

Sarah: It definitely has been a journey. But I knew that I had a big bunch of songs that I wrote my freshman year, and I knew I wanted to record them. And I was really in a rush to put it out for some reason. I think that artists, we like to give ourselves deadlines for no reason. I was like, I have to record this album and put it out in the spring and tour. And it's going to be the biggest thing in the world. And then the pandemic hit, and all of that was taken away. Originally, it was going to be a funk album.

Sarah: I was really into the funk-pop sound. Yeah. And then, once quarantine hit, I started to listen to music again and found a lot of artists like Paul Simon, Bob Dylan, Joni Mitchell, and I was like, I want to write like that. I want to make music like that. And I completely scrapped the album, and I started over in July.

That's funny. I could never imagine your sound being different from the album now!

Sarah: It's so funny to me because it's like your debut piece. That's how you're going to be known now, and then something completely different. It's like, I definitely saw that that was a very popular thing to be doing, like the pop song with horns kind of thing. And I do love it. I love it so much. But it's really, it's not me. I feel like my roots have always been in country music and Americana.

Do you feel like it's hard to-- as a young artist, you want to be on-trend, but you don't want to not be yourself?

Sarah: Totally. Being in college has a lot to do with that too, because, I mean, music school is really no different from high school. And I think that a lot of my friends were making the funk sound, and that was doing really well at the house shows. And even for me, I would do a bunch of house shows, and I would play the funk stuff, and people liked it. But it wasn't until I started. I was like, what if I just threw in a sad girl song? What if I just sprinkled in a couple of emo singer-songwriter stuff? And the response so genuine and so good. I was like, "Holy shit. People like this." I have to keep doing that and they just felt so much better. So yeah, I definitely had a bit of an identity crisis for a couple of years there.

And so what would you say that--I mean, the pandemic kind of did help you in that way, I guess.

Sarah: Yeah. And that's kind of everyone with the pandemic. We were just forced to really reevaluate everything and what is serving us and what is not serving us anymore. And for me, listening to good music was so healing, and it was really powerful for me.

Tell me about your songwriting, your creative process. Do you have one, or is it just a lot of work?

Sarah: When it comes to my songwriting process, a lot of the songs on the album are love songs. They're all about long distance. I wrote them my freshman year, and it was right in the beginning of being long distance with my partner. So a lot of it came from that. But I think, recently, I've kind of had to learn how to write songs that might necessarily not even be about me. I mean, I love my partner, and we're in a very stable relationship, but I had to look at other people's stories, and that's been really cool. "Arizona" is not about a personal story at all. It's actually about a really close friend of mine who went through a rough breakup. I was just really moved by the story, and that's how the song came to be.

I think that's how someone's truly talented is, if they can write about not themselves because everyone knows themselves well. And that's what impresses me about Taylor Swift.

Sarah: I'm such a big Taylor Swift fan. It's not even funny. And I feel like that definitely was an inspiration, just her storytelling in the way that she's able to create something so visual. And you feel like you've experienced it, and you're there.

What's your biggest challenge in the music industry for yourself?

Sarah: Every time I figure something out, there's just something new. I think right now it's hard to kind of stand out with so many people on the internet doing the same thing that you're doing, and every single time, you know, people say, "Oh, you find your niche. You got to find that one thing that stands out about you." And I think that I have always kind of been a person that loves everything. I think my challenge is going to be honing in on what I'm good at. But at the same time, I don't have a lot of motivation to find that little tiny thing because I want to do everything. I want to experience lots of different genres of music and write with all different kinds of people.

I think that just gets super overwhelming. I see so many artists, and it feels like they're just screaming into the void. And it's like, you know, social media, the end of the day is just a little toxic. How do you kind of stay motivated to keep doing what you're doing?

Sarah: I think for me, I have to remember I'm a person first, and then I'm a musician. And at the very bottom of the list, I am a content creator. And I think that just surrounding myself with friends that remind me you don't have to be the person you are on social media all the time. You can also just relax and watch stupid TV and hang out with your dog, and that's totally fine. This should not be my whole being, and I should write music for myself. So, yeah, I think that just trying to find a healthy balance of being a person and being a musician.

What would you say would be your best piece of advice to like a young woman who wants to pursue music?

Sarah: I think my biggest advice is to try everything and learn unapologetically. I think for women especially, and I feel this way really strongly because of the field I'm in with audio, I feel like we are-- especially in what we see on social media we get very obsessed with, "I have to be that good right now." And at the end of the day, I'm only 20 years old. I'm still learning about audio; I'm still learning about songwriting. And this is a very vulnerable period in our lives where we're supposed to learn, and we're supposed to make mistakes, make bad songs, maybe play a bad show or two, and learn from it. And I think that that's really been the best part of it all is how far you come when you let yourself learn stuff.

So I get I guess my my my last question is what's next?

Sarah: Honestly, I've been really happy that I really have enjoyed the album process. But all of those songs were written-- I mean, the joke is that all the songs are written before I got my driver's license, which is true. But I'm 20 now; I'm almost 21. And I've written so many songs since then, and I'm so excited to just start fresh, work on new stuff, work with other people especially. I feel like it's been a really collaborative process with the album, but it also gets a little lonely because it's all my own songwriting. I don't have any songwriters. And I just can't wait to perform again. I'm just dying to play a live show again. So when the world opens up, you bet I will be playing every stage I find.

Oh, so I have one more. What would be, off the album, the song that you'd think would be hardest to play live?

Sarah: Yeah. I think the Passenger Seat, the last song on the album, it wasn't originally going to be on the album because it was so personal to me. But also, while I was recording it, my engineer said to me, he said, "Is this song about your parents?" And I was like, "That is so interesting, because my parents, like myself and my partner, were high school sweethearts. And now, listening to that song and playing through that song, I just think about them. And I'm like getting emotional now. It's just really, really beautiful to think about. And I love their love story. So, yeah, I think definitely that one.