Note from the editor: Samantha first told me about the unsolicited photos from The Band Camino member Graham Rowell years ago; at the time, I told her it was her story to tell, but I would never cover the band on The New Nine, and we haven't until now. We have nothing but respect for how The Band CAMINO handled this situation. We are a site created to make sure young women don't lose their voice, and that's why we wanted to publish these stories. We reached out for their approval and wanted to put this in their own words. We reached out to the band for a statement. - Emily Treadgold

Before I go into any detail, I want you to know first and foremost, this isn’t a piece to put The Band CAMINO on blast. I couldn’t have more respect for Spencer, Jeffery and Garrison than I do right now. The actions that the band and their team had to make shows how much they care about their fans. Thank you for believing us and continuing to give us a safe space.

I don’t know exactly how to start this at all. I thought I’d be prepared to tell my story three years later, but I still am struggling to find the right words to articulate how I feel. I often felt like a terrible feminist for still supporting The Band CAMINO even after what Graham did to countless other women and me. My Gemini tendencies got the best of me in this situation, and while I knew deep down it probably wasn’t true, there was a moment where I just thought I was the only one to experience this, and I didn’t want to jeopardize the band or any third party involved. Even though it’s considered a city, Memphis is built like a small town, and I didn’t know who to turn to.

I didn’t even tell my friends until last year.

When I saw the tweet from the band account announcing the news of separating from Graham, I didn’t want to believe it, but in my gut, I already knew the reason. I was introduced to the group from various friends in Memphis, and being a fan of local music, I was impressed by their talent. Before what happened, I just knew this band would eventually become to the level of where they are now. All it took was one pitch, and the group agreed to an interview. Graham was the one to get in touch with me and arrange our meeting, and we met at a local coffee shop along with Spencer, Jeffery, and at the time, Andrew.

We met for about 30 or so minutes, and the interview went wonderfully, and I was thrilled about the piece I was going to write. As with most interviews with bands or their publicists, I leave my information should they want to add any details or send updated press photos. Graham was the one to take my contact information and send me everything I needed. Innocent enough, right? I shouldn’t worry about anything. I did this with acts and their team all the time. Why was this any different?

About a week later, Graham added me on Snapchat and Instagram. It’s no secret, and most of my socials are public. Not to mention, my handles for all socials are in my New Nine bio. He explicitly said he wanted to be friends. The conversations were very superficial. “What do you do besides write?” “What do you enjoy?” and ultimately, “What is the most embarrassing moment you’ve had?”

This last question seems to be the common thread of all the stories I’ve received. I told Graham I’m an open book, and I’ll tell anyone this story if they ask, but it’s the typical middle school girl who got her period story. In return, he told me his most embarrassing moment was when his dick was so massive he accidentally flashed a pool party he attended in high school, and that photo leaked to his class. I assumed this was like most men who wanted a laugh to boost their ego, so yes, I obliged and laughed at the joke.

He then told me that their fanbase was generally younger and asked me if I knew the one thing fans regularly ask them. I, of course, had no idea, and he told me that fans had asked him about the size of his penis. I explicitly told him this was very inappropriate for anyone to receive, but especially a writer who just interviewed them. He apologized and continued the conversation. A few weeks later, he told me he appreciated me as a (semi) music professional, and considered us to be “best friends.” Almost immediately after he asked me to send him provocative photos, and in return I could get “VIP for life,” but “mostly so he could hype me up if needed” and “he’s an ‘ass’ guy.” I obviously declined this notion and I thought this was the end of inappropriate conversations. It wasn’t until several weeks later before I received my first unsolicited dick pic from Graham.

Even through all of that, we continued to be what he considered friends, and he even opened up about the relationship problems he was having to me and how desperate he wanted things to work with [redacted]. The band’s reach in 2017 wasn’t quite the band you know now, and I still hadn’t published my article yet. I also happened to be 26. I think both of these factors played into why my story ended sooner than the others.

The photos went on for months - all unwarranted. I realized he was never going to get it no matter how many times I denied him. I stopped acknowledging his advances, and the conversations eventually fizzled out.

Around five months later, the group headed out on their cross-country headlining tour, and I received yet another unsolicited photo with an inappropriate caption. This time, they got sleazier. Graham went into detail about his tour habits. I only wish it as innocent as leaving his socks on the bus or something. He told me he would masturbate on the bus at least once after every show, and he eventually was brave enough to ask me to reciprocate with photos or video. It was then that things stopped completely. It was almost as soon as I told him no, I became blocked on every social media outlet. Around last March, I received a Snapchat notification and saw that he had added me back and because I didn’t respond until the next morning, he blocked me again.

I don’t think I’ve fully told everyone this story, but it’s been cathartic for me to write it all down. I didn’t know how to make sense of how I felt or who I could confide in. But I did know I had a weird feeling of even keeping him as a friend, but I knew there was a fine line of being nice and being a fan of the band, and I wanted to ride it very carefully. Looking back on it, why I was so concerned with what other Memphians thought of the band and me is beyond me.

To all the women he did this too, I’m sorry. I’m sorry I didn’t speak up sooner because some of this could have spared it happening to you. I’m sorry you felt the need to stay silent all these years. It boils down to the manipulation and abuse of power he had. I hate that we all got dragged into this, but at the end of the day, we won. We can now look to the future and know that we all have one another. Monica, thank you so much for your courage for sharing your story and allowing all of us to speak up. Thank you to every single one of you that has spoken with me. You’re not alone.

One last thank you to The Band CAMINO. Jeffery, Spencer and Garrison this means more to me and countless fans than you know. I can speak for all of us when I say we applaud y’all in making this difficult decision. And let me tell y’all, it felt DAMN GOOD to play “Free of Charge” and scream sing out loud with zero guilt.

I spent a few days talking to several women from Memphis all the way to the United Kingdom who told me their experiences with Graham. They gave me permission to share their stories because they all wanted to be heard. And deserved to be heard. 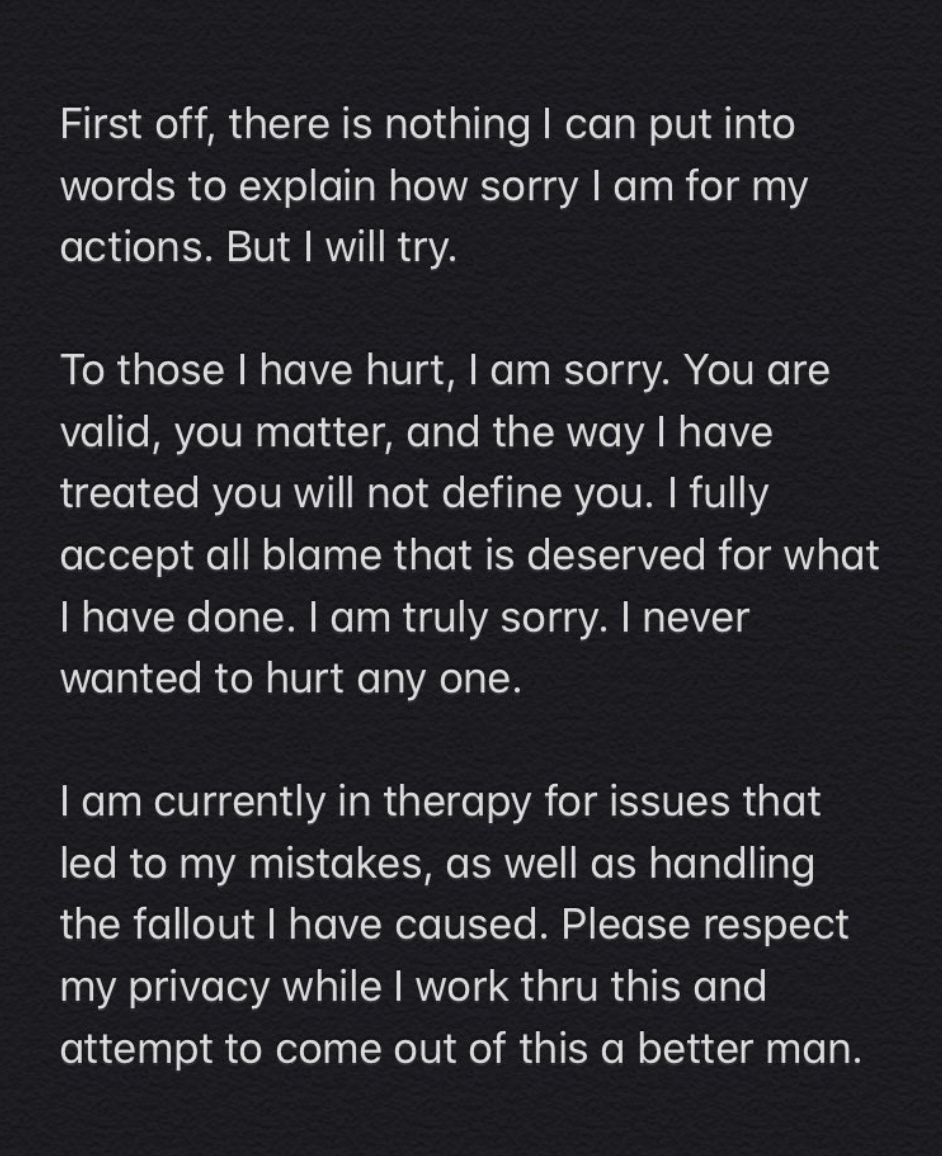 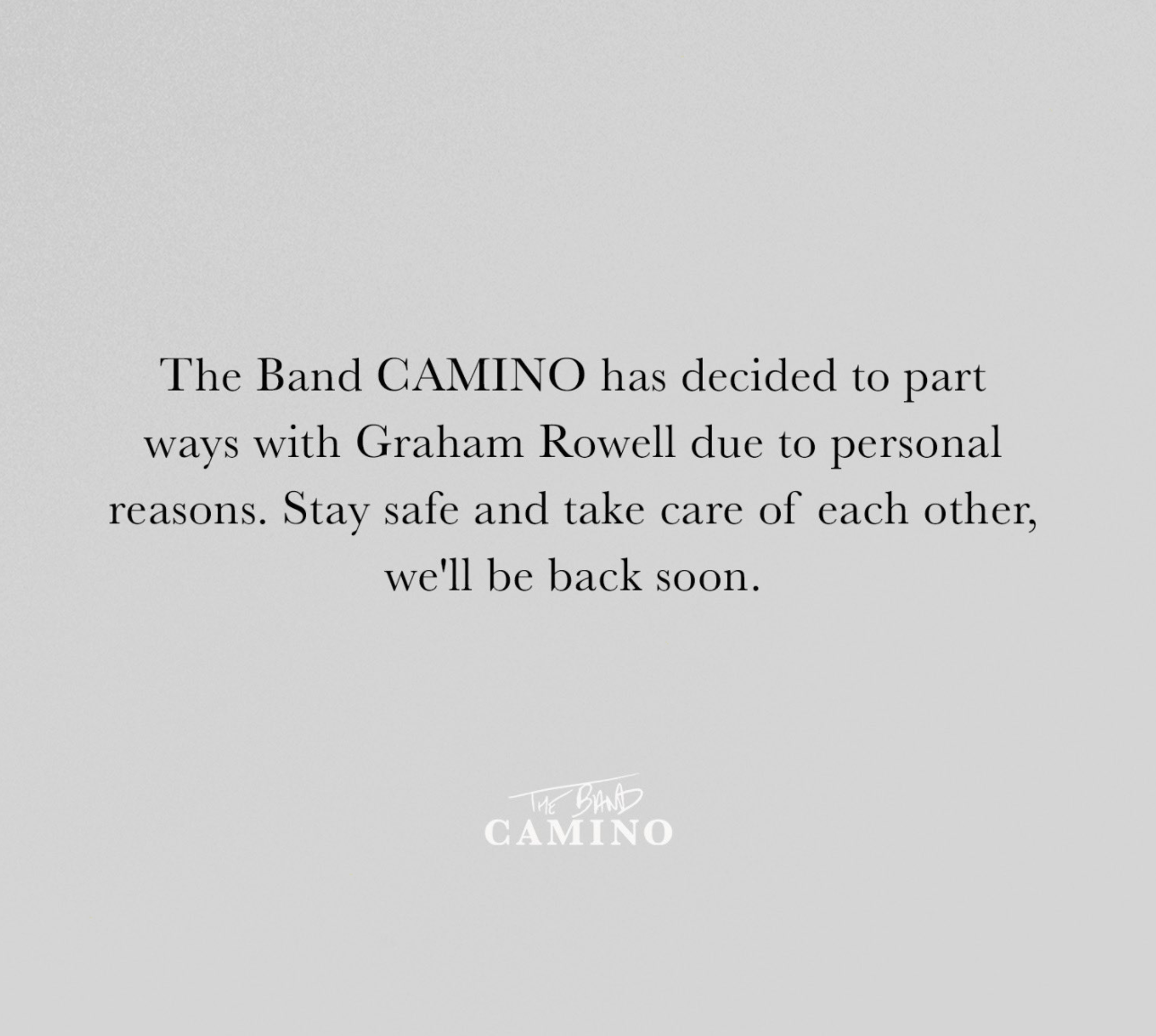 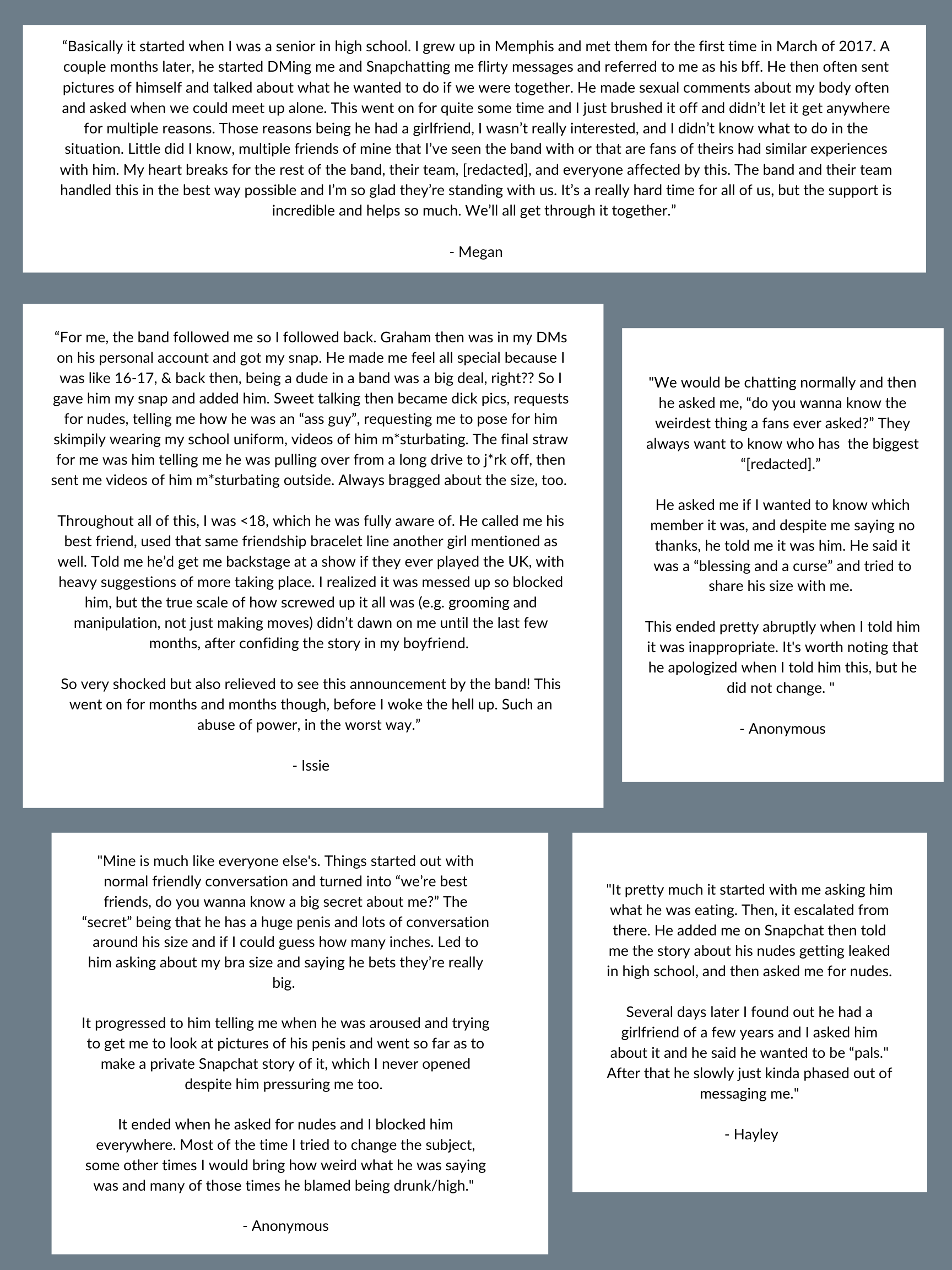 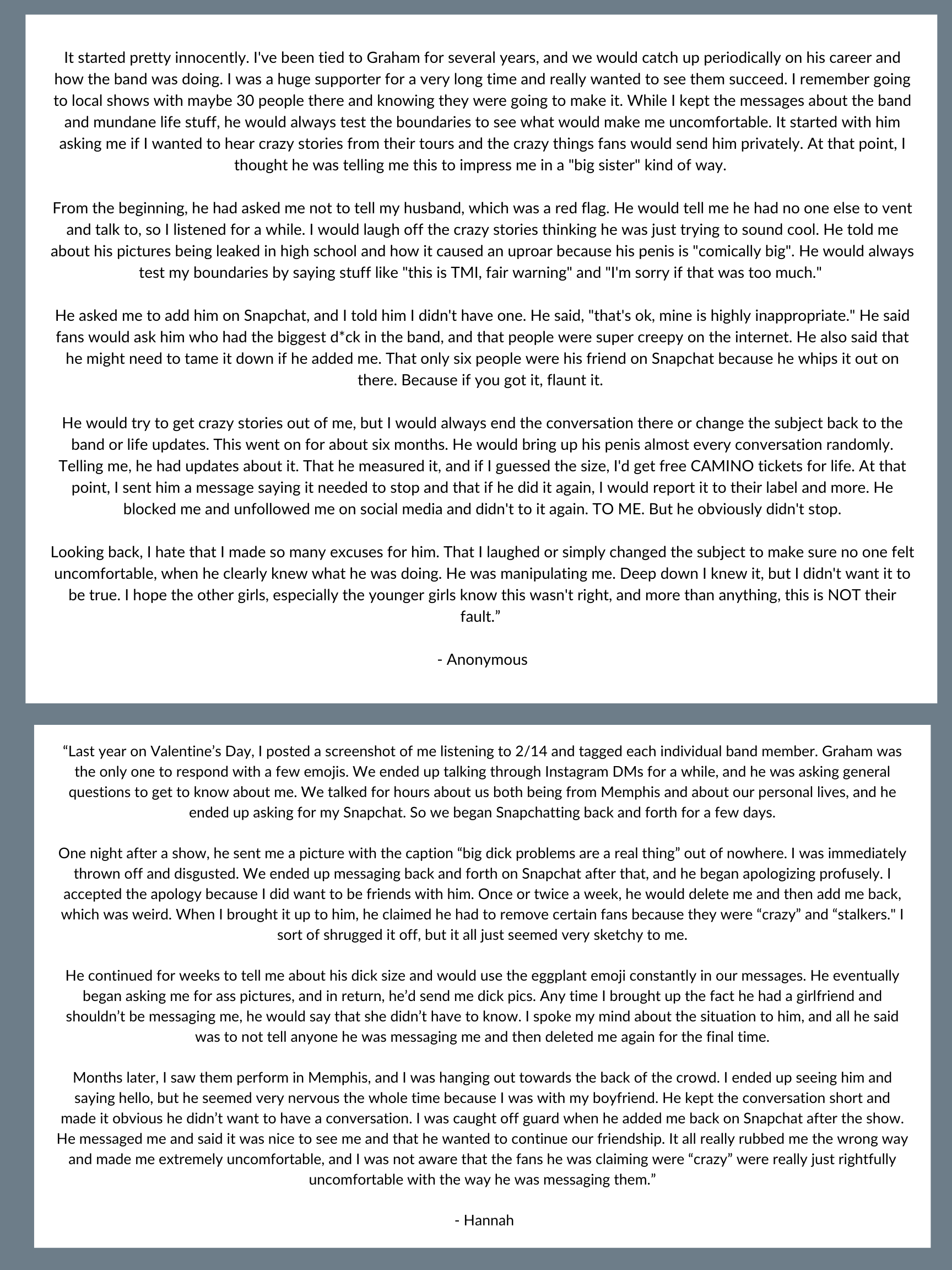 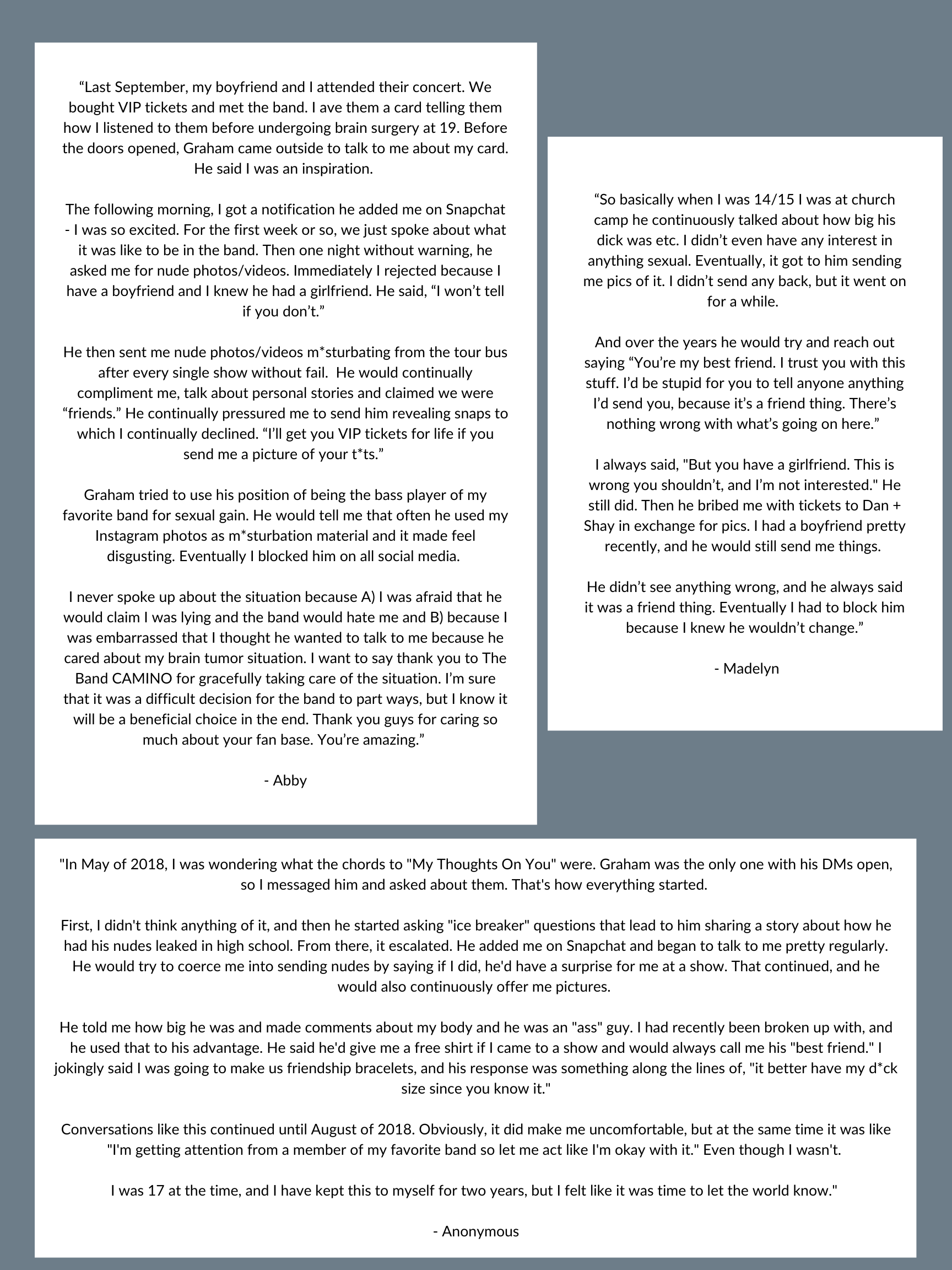 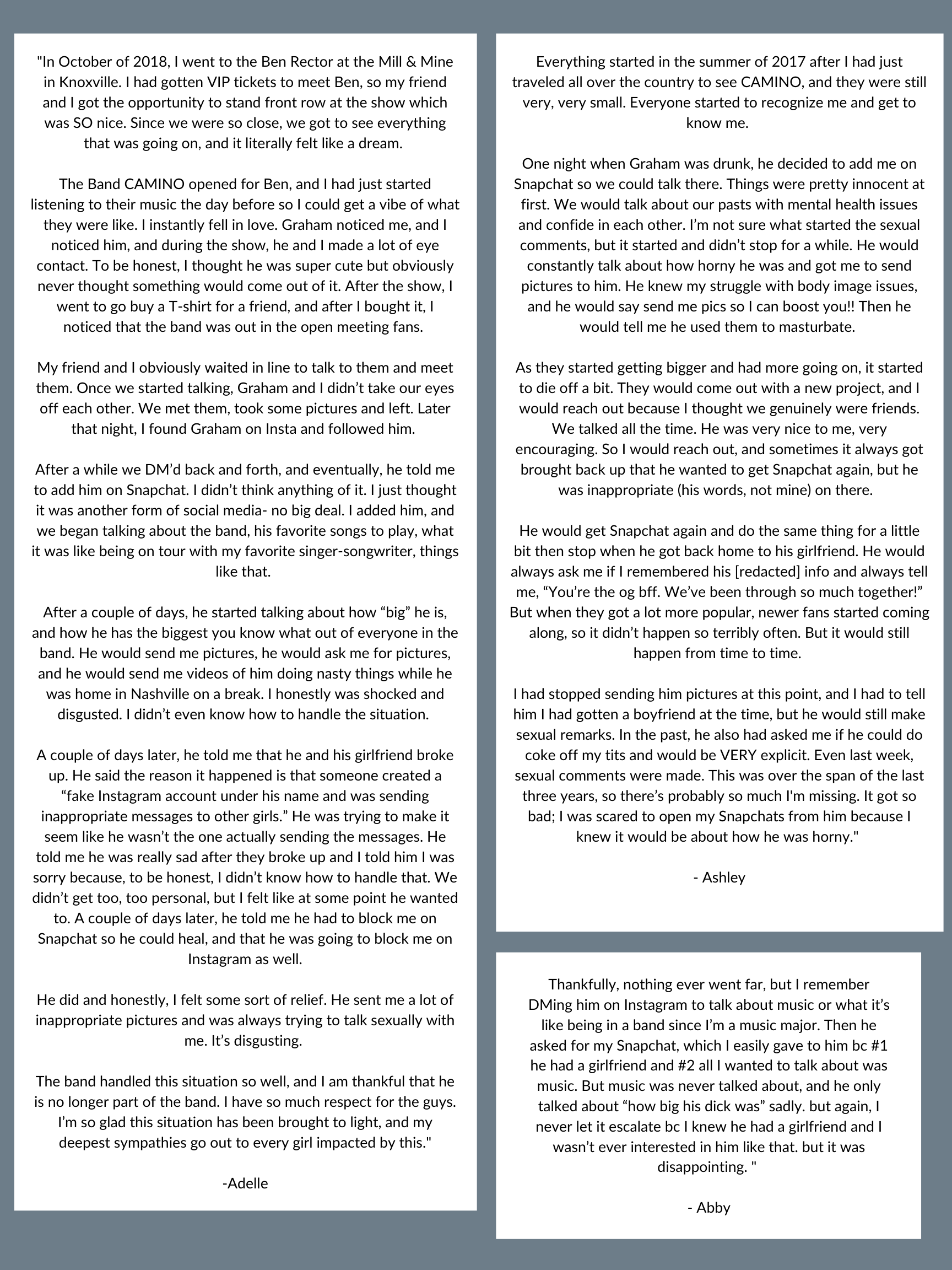