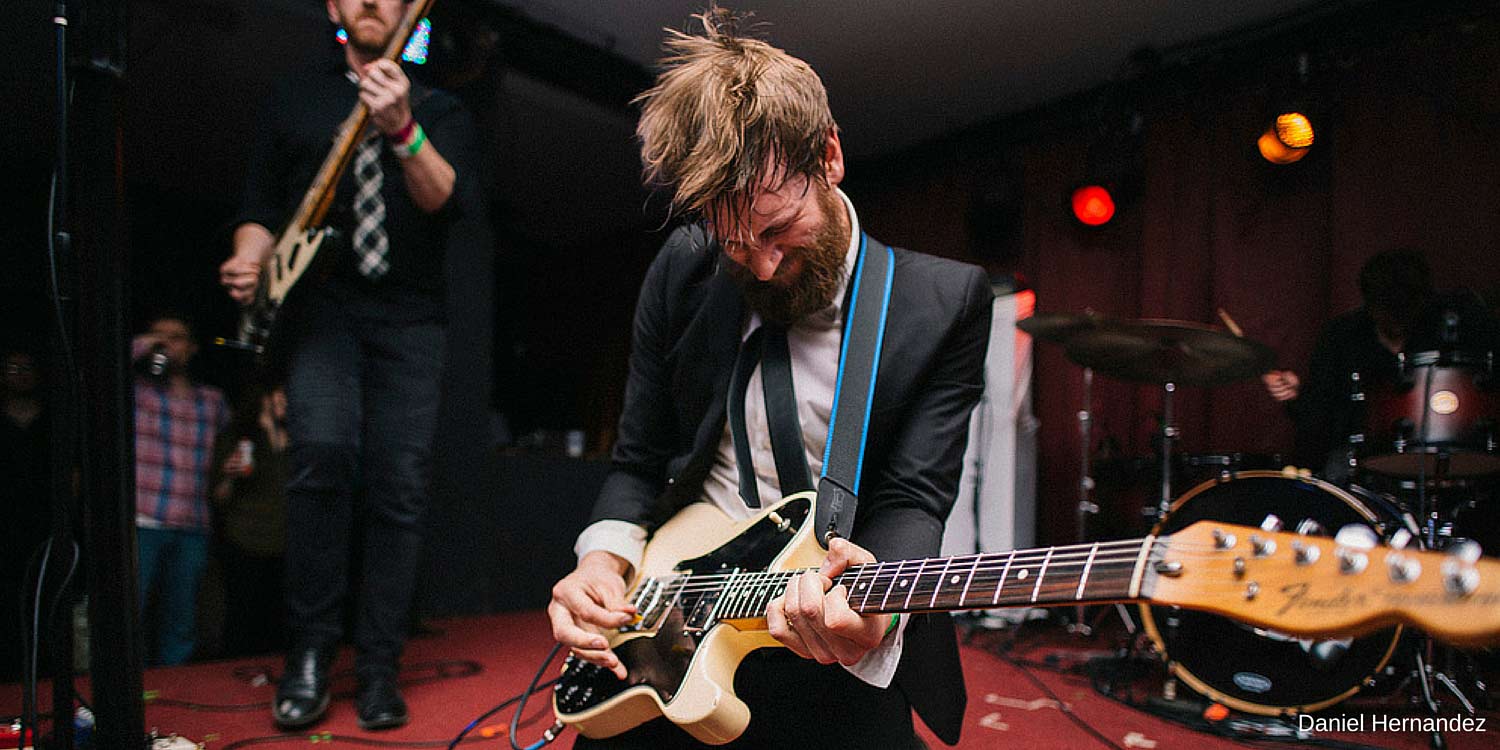 Quiet Company is an Austin band that garnered a lot of national attention for their album We Are All Where We Belong. What grabbed my attention about them was their dynamic and intense live show, complete with crowd interaction and political rants. I talked to frontman Taylor Muse about their latest album Transgressor, competitive Austin bands, and why bands shy away from politics.

Taylor grew up in the religious realm of East Texas, he wasn’t really allowed to listen to secular music. When he received Smashing Pumpkins’ Mellon Collie and the Infinite Sadness he knew he wanted to do music for the rest of his life.

When Taylor started forming Quiet Company, he found success in honest lyrics and intense live shows. Transgressor is their most advanced album yet, made collaboratively with renowned producer Matt Noveskey. It was recorded live to capture that same intensity as their concerts.

Taylor says, “It’s a little bit heavier in terms of what’s different about it, we’ve always been told the live show is really energetic and we always liked that but it was always this kind of ‘man, the records are good but your live show is so much better’ and we were just kind of tired of hearing that so we just thought ‘we’ll just record the whole damn thing live’ so that’s kind of why we did that and i think it captures the energy a lot better.”

Being in Austin, the city of live music, has it’s difficulties, with every show and every band there are a thousand other bands. Every musician is competing. It can be a difficult environment, ripe with phony friendships and people that will talk shit about you behind your back. Taylor is not denying that they are competitive, but having that music community has been beneficial.

He says, “The scene is really good and there’s bands here that make you feel like you have to step up. You’ll think ‘damn I wish I’d written that, or I wish I’d written something better’. I feel like there’s a healthy balance because it would be really easy to get pretty cynical and I certainly fall victim to it pretty often.”

What helps Quiet Company stand out is their live show. It’s intense. When I first saw them I had no idea what to expect. As soon as I saw Taylor shaking violently on stage, his hands twitching, and at moments even yelling at the audience, I knew they had a certain quality that a lot of bands lack, they had a presence. He says it’s his version of therapy, the way he performs and writes his songs.

Taylor says, “I feel like I’ve always been an honest songwriter. I don’t want to make my life look better or worse than it actually is. So when we get on stage and I get to perform, it’s an extension of that. I’m very conscious of the idea that I am performing though, and I’d be lying if i didn’t say there were nights where I feel like I’m doing the best impression of myself. No one can just really do that all the time, I don’t think, honestly. There will be days where you get on stage and maybe your day has sucked for whatever reason or maybe the show isn’t well-attended…but I’m supposed to muster the same quality of show for 20 people that I am for 2,000 and that’s difficult to do.”

At some of his shows he goes on preacher-level, can-I-get-an-amen quality sermons about society and politics, but he understands that it’s not everyone’s cup of tea. Bands can’t “go political” without repercussions.

He says, “People only feel that way when a band feels differently than they do, at the end of the day they’re not mad that you’re getting political they just don’t like challenging what they think because they like you and they’re like ‘oh man I thought he was like me’ and I’m like well no I’m not like you I’m me. I’m an actual person I’m not the CD you put in your player.”

However, singing about politics shouldn’t be something a band is afraid to do. Taylor thinks he isn’t being bold by confronting religion and politics in his music. He’s hesitant to go too in-depth about it, but he uses metaphors and imagery to convey his views.

He says, “I feel like there’s always going to be someone that comes along later with more information than me. You run that risk with anything you think and say. I don’t know why I feel particularly guarded by that. I feel like I never really know enough. Our record before ‘Transgressor’ was a concept record about religion. I’d spent my whole life learning about that, so I felt pretty confident about that. I didn’t do anything really brave, because Austin was a good market for that. I never worried that I would be excommunicated from my family or anything like that. I knew that wasn’t even a possibility. I knew that it would hurt them, but I was never really worried about that sort of thing.”

That doesn’t take the bravery out of what Quiet Company is doing, by bringing politics and religion into their music, they’re starting a conversation, something we’ve been told to shy away from since whatever etiquette class our parents sent us to. They’re bringing up questions for us to answer and at least think about. Our musicians used to lead us in political revolutions and now they shy away from it. The least we can do is talk about it, and not be afraid to question our government and our society. Maybe that’s what makes Quiet Company a unique band. That ability to make us question our views and start a conversation.

DO NOT MISS A QUIET COMPANY SHOW. I promise you’ll have a good time. Check them out and follow them on Twitter @quietcompanytx