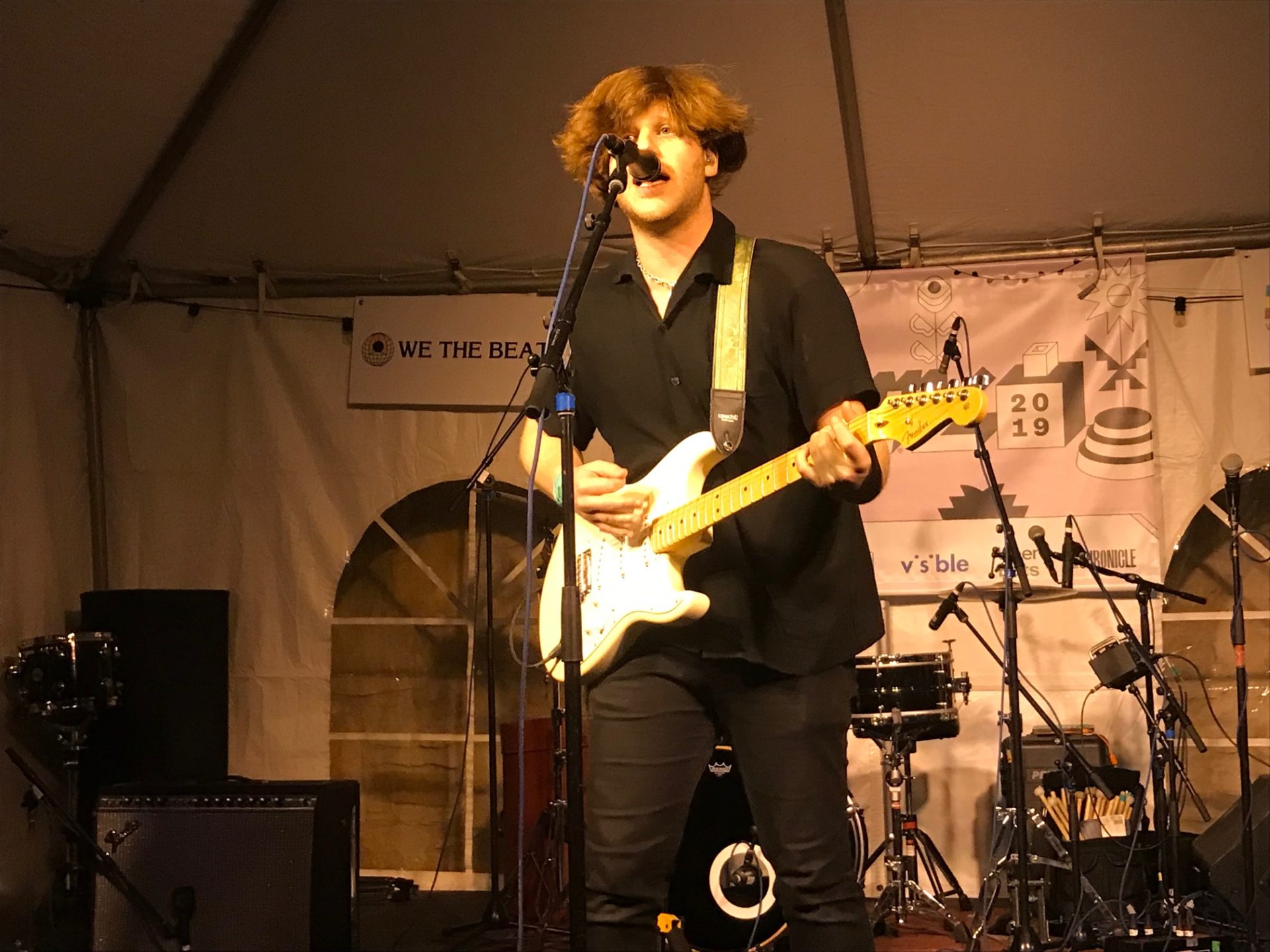 Yoshi Flower had one of the most exciting shows we saw during SXSW. At the WFNM showcase he climbed up on the amps and hovered over the audience, playing his guitar with his teeth. His energy on stage is incredible and his songs are so original. We chatted with him about the crazy performance.

Do you kind of feed off the audience?

YF: Yeah. I think so. I think it's like anything. Wow. This guy's feeding off of just life. It's like anything, if we do it together, it's just more lit. You know? My shit's not really like a solitude medium yet. I have some chill songs but, I always played music when I was alone in my room and shit and so now it feels really good to connect with other people through it instead of just retreating.

I feel like your music encompasses a lot of different genres. How do you kind of get inspired to make new music?

YF: How do I get inspired to make my music? I think that I'm a pretty keen observer of human things and it makes me overlook a lot of details which sometimes is troublesome, but I just observe. I come from the Midwest. I was raised middle class, two miles south there are slums, six miles north there's a mansion. I'm average height. I'm not that hot but I'm not that ugly. I'm not that good at singing so basically, I'm just in the middle. All of us in our own way are in the middle of everything but I just like have always felt I just have a good vantage point on stuff. So it's like it only makes sense that my music is so tied together to so many threads and that's my own. I mean, I don't know. I just do what I like. That's really it.

What's kind of the biggest challenge you face to the music industry?

You feel like you're comparing yourself to other artists?

YF: I don't really like to do it because it never feels good. I can go on and sit here be like, "Oh. Post Malone is dog shitting on me." Or I can see somebody who's not as fortunate to me and either way it never really feels-- I don't know. It's difficult to be ambitious but also be honest. I love when Oasis is like, "We're the fucking biggest band in the world. We're the best fucking band in the world." Yeah. I feel like that when I'm alone in my house because I'm the best band in that house. But this shit drains me because it's so many people trying to be heard and I respect all of them and their crap but at the same time I'm just like, "Yo. Is this really why we do this?". I'm super grateful that we're having an interview but there's always going to be a part of me that's like, "Fuck. Am I self-seeking??" I think my biggest challenge is that I don't think that stuff's as a good human tendency but same time it's like it can be fun, and it can give great experiences to people. So it's just trying to balance those contradictions, really, I guess. If that makes sense.

No, for sure. For sure. I get that. You just released Dirty Water. Kind of tell me the story behind that song.

YF: I went back to Detroit, where I'm from, and I picked up a local rag. I like reading fucking local rags everywhere I go, because there's just still something about holding that shit in your hand. And no matter what, it's tabloid. Even if it's a fucking article about a library. Even a 1,000-person town, their news is just so sensational. Like, "Backpack Stolen at Local Gym!" I'm like, "All right, badass." So I was reading a Detroit rag-- I don't remember which one, but it was like, "Flint Water System Officially Changed to Detroit Water System." And then a certain constituency was appealing it, to make them figure out another thing. But it had taken two years for them to get their water back, and it's still all fucked up. And I just remember two years ago it was so buzzy. I was like, "Fuck." I got on a plane from Detroit to LA, and I was like, "Man." There's probably so many things that were so buzzworthy and they just became marginalized once it didn't matter. And what does matter mean? Oh, it attracts things? When it still held such weight?, and all these family and friends that were from where I grow up, and that I have love for, and that are just super-working-hard people. So I was kind of consumed by that. And then I landed and wrote a love song because I was with my girl Talia. It just became this torrid affair, because I was consumed with this fucking water crisis. But I didn't put it in the press release or nothing, because I just didn't want to exploit that shit, and I'm not an authority on change. I'm not even knowledgeable enough. I can't solve it, so I can't profit off it. That'd be fucked up. So I just put it out and was like, "Hey, here's my new song. Hope you like it."

YF: I'm just basically just trying to be a good person. Trying to be on time for shit.

What would be your best piece of advice for a young musician?

YF: I would say my best piece of advice for a young musician would be just don't compromise your integrity, and be grateful. You can have fucking five million Instagram followers and still be a fucking chump. That shit's obsolete. I mean, it's cool if that's whatever. I respect it. But at the end of the day, it's like I want to be a fucking man, and I want to make people around me feel safer and be [freer] to express their true selves. And I think if I were to sit with a young musician, I'd be like, "Hey, that is your goal, and fuck all the other shit. That shit will come if you just focus on your writing, and your honesty, and your reliability, and your service to other people." The most supreme thing that could keep us going and well-oiled is just being of service to others. And every time people do that shit, all their dreams and aspirations just come true. So that's what I would say.