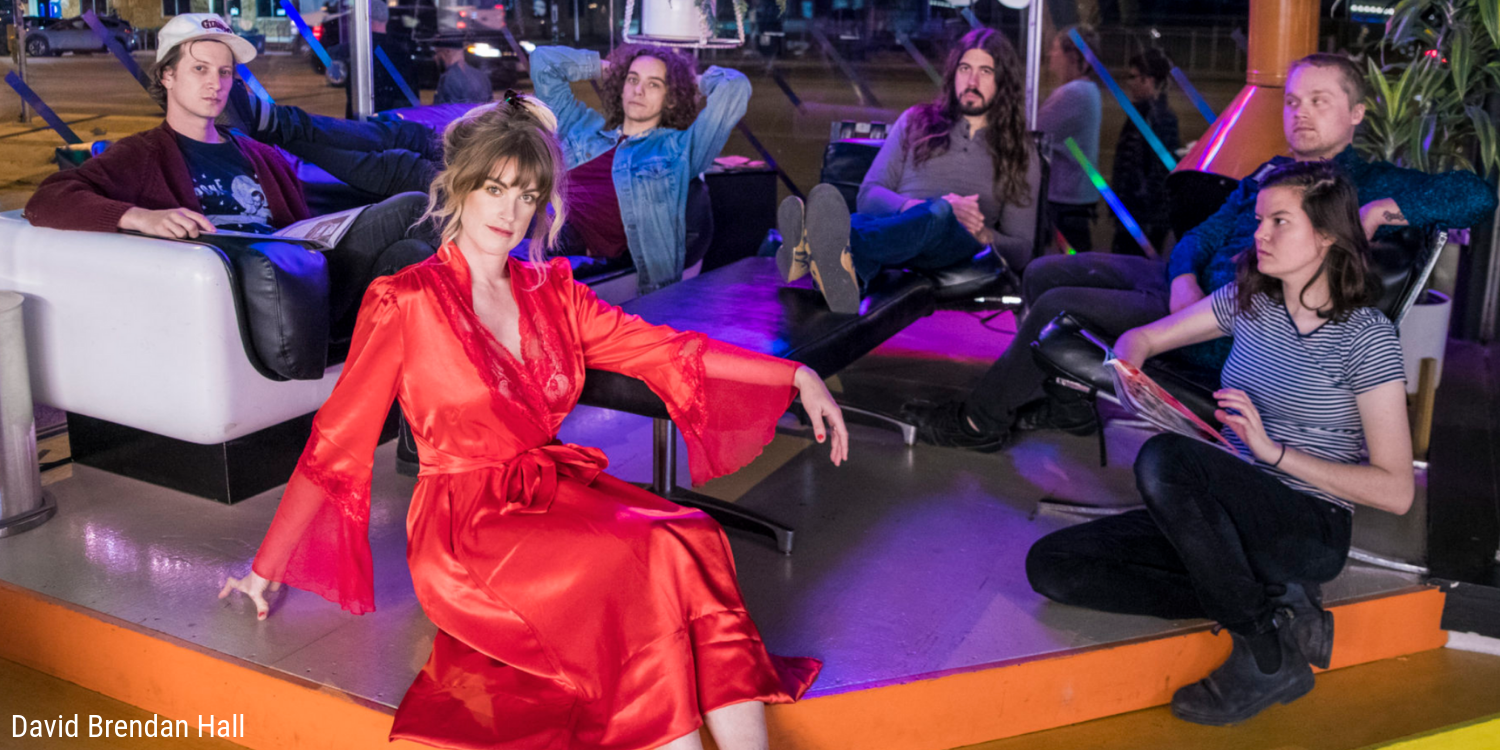 Acey Monaro has a strong personality, which is one of my favorite things about her, she’s gravitating. I first saw Go Fever when they were doing a full No Doubt cover set and I was hooked instantly. Acey has a powerful voice and a flair for words. The day of our interview she had a fitting for new stage outfits. For Go Fever, showmanship sets them apart.

Acey grew up in a musical house with the classics. She loved singing but didn’t know exactly what to do with her powerhouse voice. She says, “I always wrote my own songs, but I didn't sing them for anyone. And I just knew three chords on the guitar. But you can do a lot with three chords on the guitar.” Her voice found a home in Janis Joplin’s “Mercedes Benz” a song she sang on stage with her stepdad's band. She wanted it to be as accurate as possible.

“I affected her voice really well, so I did the kind of throaty thing. I would have been 10 years old. And I walked off the stage and my sister walked up to me. And I guess she was a little bit-- she was being a smartass but she was also a bit jealous because I had all the attention. And you know at the end of that song, Janis goes, 'Everybody,' before she goes into the last chorus. And so I, of course, put that in because I did a very faithful rendition. And my little sister goes, 'When you said ‘everybody’, no one else sang' and I hit her in the face and then I had to climb up a tree and I had to stay up there for hours because my mom, I knew that she'd smack me when I came down.”

While she had the voice and charisma of Janis, she struggled with nervousness. “There's one particular time I remember my friend was going to let me sing two Lucinda Williams songs at just a tiny little gig at this bar. And I got so nervous that I actually got to the bar and I knew what times they were going to get to call me up to sing. And I went to the toilet and I couldn't come out of my cubicle. I had so much anxiety. And my ex-husband was calling me and calling me and he's like, "Where are you?" And I just turned my phone off and I sat in there for the whole show.”

She had a small inheritance from her great-grandmother and spent it on her first record. She explains, “I promised her on her deathbed that I was going to spend it on a deposit for a house. I think I was like--it's not the Great Depression anymore. This isn't quite going get me a deposit on a house in Austin so I was like, ‘No. This is where it's going.’”

It’s still an investment and it’s been difficult to “mother” a band as she calls it. In Australia she was used to a different music scene, in Austin she could be more pop-focused. She says, “I got my now husband and some mates together and we made an EP under my name. And it's kind of-- it's a pretty mad sounding EP because I hadn't quite got its shit sorted out. And then from there, I was like, 'Oh, that was fun.' So I guess from there some of the people that played on that. They were just all friends really who were just around. And we actually made our first record. I think we started recording that before we'd even got a show.”

With their upcoming EP, “Daydream Hawker” she found the name after she found the art. She found an artist on Instagram that she wanted to do the artwork and plucked the name off a song lyric. "I liked that it's abrasive,” she laughs, “It's one of those things where I had the five songs and I was like-- it was a practical issue because we couldn't afford to make 10 songs.” After really looking at them she realized it made more sense that way.

“Sometimes the themes, the connection between the themes isn't obvious to me until I step back and I can see what I was going through at that time. I was definitely experiencing some physical and mental health issues over the last year and a half, and so it really shines through. The last song, I feel like every album I ever write will have a song that's not about me but is about me but it's about in a weird outside character. I filled up like half a notepad of just little couplets and ideas and it took me so long to put it all together in a way that I thought represented the story truthfully because I wasn't making the story up. It was really difficult to have a faithful rendering of it.”

Acey still gets nervous, but she has a system for that now. Sometimes she waits in the car until their set starts. Her husband will text her when the band before them starts playing the last song. She says, “Sometimes, I just-- I physically and mentally cannot go into the venue before we get on stage.” She has specific artists she listens to, artists that fight off the nerves.

“I had this thing in my head, like the type of music I listen to before I go and play. I try and get a bit of a punk approach to it. And I have to be like, ‘Fuck this. This is what I've always wanted to do.’ I have to remind myself stuff before every show. I have to-- I psyche myself up. It's about listening to the right music to get me in a particular mood before a show. And that varies. It's so funny. You know what I listen to most often? It's like Dwight Yoakam, which is so weird or basically Sex Pistols kind of stuff.”

Her best piece of advice to young women in music is to have a community and build friendships with other women so you can support each other.

She emphasizes, “Make sure that conversations that you're having encompass everyone and not just women who look like you. I think intersectional feminism in music is really important because there are so many people who are invisible in our conversations. And I've been guilty of that too. We really just have to make our own community and have female idols. The older you get, especially for me growing up with blues and country and classic rock and roll, you realize how many of your idols are actually sexist pieces of shit men. Having female idols is really important. Even in your own scene, it's important in your own world.”