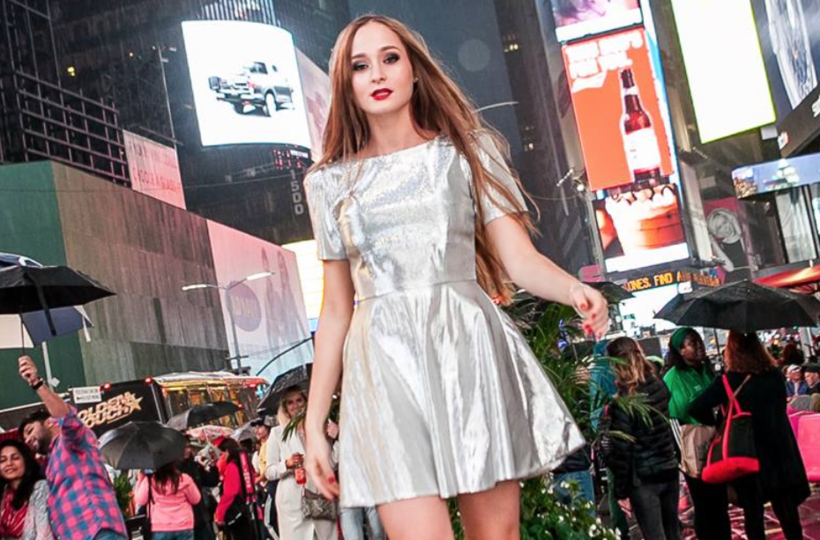 After headlining the 4th annual event “The Soirée” and releasing her first single, “Affection”, Annamaria‘s fame is on the rise. Originally from Greece, and now based in New York City, the seventeen year old is ready to build her music career.

Singing since she was little, she says “I didn’t take my voice too professionally until about the 7th or 8th grade”. It wasn’t until she says, “I sat down at my piano and wrote every musical thought I had down, did I realize music was the only thing I truly loved to spend time creating.” As both Greek and Italian, Annamaria grew up around music and dancing, and says that they “were part of my everyday life” and that “watching my family and friends not be afraid to dance and sing in front of other people helped boost my confidence as well.” She started releasing covers on Youtube about two years ago and gained a positIve and supportive following.

Now beginning to break ground with her new music, Annamaria still finds her sound a little hard to place. She explains, “I don’t think categorizing music is easy” or that “putting sounds in boxes is even real. Music is one thing, a beautiful thing actually that is difficult to explain in one word.” Growing up around different genres, she had a multitude of resources and inspiration. She explains that “although I’m under the category of pop, I feel like I have some R&B/soul vibes in it.” She lists some of her inspirations as Demi Lovato and Dan Kanter, stating, “[Demi’s] voice and songs inspire me to write something a little deeper or sing a little louder and Dan Kanter is an unbelievable songwriter that I’ve been inspired by since a very young age.”

Opening up about “Affection”, Annamaria says, “It’s a song that I wrote under pressure and very quickly, I wrote to a track for the first time, rather than writing lyrics and melodies first.” Fortunately, “the lyrics came straight to me, with no hesitation and after about 14-20 minutes I wrote the whole track.” With a sultry sound and lyrics, the song captures the pop vibes she’s inspired by, while nodding to a more soul style. The song is very special to her and she says, “it will always have a special place in my heart because it reminds me of what I’m blessed to be able to do.” This last Grammy Weekend, Annamaria was honored to perform at “The Soirée”, a celebration honoring Grammy nominees and winners. “It was the first time I ever sang “Affection” live and a band played the music, so that was unbelievable”, she explains, adding that she also loved meeting new people and getting new influences.

Through it all, Annamaria says, “the most important thing I’ve learned is patience. When my song was finally mixed, it wasn’t perfect, which made me understand more that editing and re-recording is good for the song and for the way it sounds.” From dedication and determination comes a lot of the most rewarding work and for other young singers and songwriters interested in the industry, her advice is “to be patient and open minded” explaining that “some things or people will work, but a lot of the time they won’t. Finding the right people and things that make you happiest and wanting to make more music is what it’s all about!” Wise beyond her years, Annamarie sets a great example of what it means to love your work and continue to stay true to yourself. Sometime this year, she hopes to release more music and possibly a EP saying, “I want people to hear my words and my sounds” and with more performances and interviews on the way, her career has only just begun.