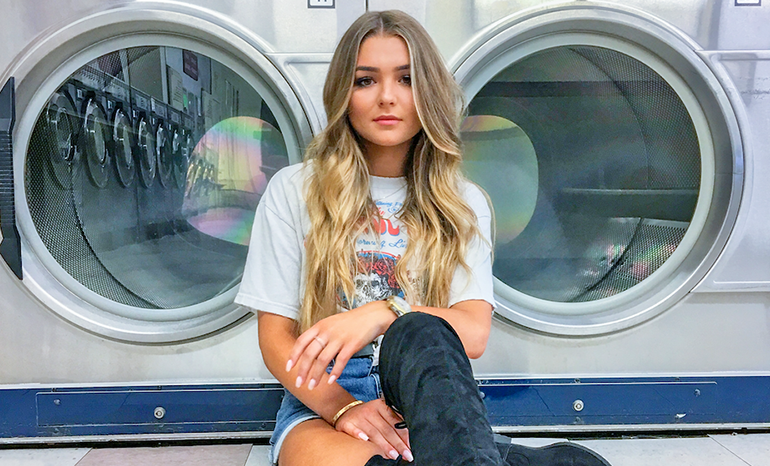 Gabi Sklar started taking music seriously when she was just 14-years-old. She was taking vocal lessons and co-writing and she signed with a management team. A lot of people aren’t sure of what they want to do at that age but she was set on her decision. Now, she’s 18 and she’s never second-guessed her decision.

Gabi says, “I think it was just a very pivotal point and I don't know why. I think it was just, I was writing since I was 8 and so it was such a long time of me doing that. I really wanted to continue doing it, and then I appreciated it more, and I just wanted to get better at what I was doing.”

Her recent song “Liberteens” has been making waves, it's such a shimmering song paired with a video with visuals of partying teens that turns into a Marie Antoinette throwback, but Gabi struggled with finding her sound.

She explains, “Especially being so young and starting to co-write. My first session I was just blown away and it was like, I had never been co-writing before so I was working with a lot of older people in the room and it was really easy for me to fall under the influence of them. And I think I really discovered my sound kind of recently actually. My inspiration just kind of draws from artists that I look up to and everyday things that I see, things that I hear, things that my friends go through.”

Songwriting sessions are incredible intimidating. Even for an experienced songwriter it takes a lot of guts to go in to a session and share your personal lyrics and speak up when you’re in a room of more seasoned writers.

She says, “I think I take away a little bit from each session and I learn a new thing from each person. You have to find your right people that you work well with because writing is so personal. I think you just have to be very open minded going in, and there have definitely been times where things didn't work out but when it does, that's really, those are the magical moments.”

Gabi started in music really young, so since she’s working with people much older than she is it can be hard for her to stand her ground and defend her work, but she makes sure that anything that’s released is authentic and has her voice behind it.

She says, “I would listen to the song when it was fully produced and ready, and I just wasn't happy with it and I was like, okay, this is not necessarily the type of music of lane of music that I want to create. And that's when I realized, I had to change that and take charge a little bit more. And whether that meant I came into the session more prepared and had something written already that we would work on or just take charge in a session and just said, I don't really like that, and be a little bit honest and straightforward. I think there's no reason to kind of fear an older person's authority I guess because at the end of the day, it's my name on the music. And it's my music that I'm putting out and music that I'm writing.”

“Liberteens” is so clearly her own song, its young and has this electric energy about it. She says, “It was really inspired by my high school years growing up, going through parties, and friendships, and hardships, and break ups, and it's kind of just like every year that I was in high school, and every party, and every moment was kind of a line in the song. And, I remember going into the studio and I had written part of it and I had this idea and I was like, it would be really cool to make this relatable anthem kind of song.”

The song feels so genuine because it was inspired by her life and her town and her friends. Even if people aren’t living through their highschool party days, it takes them back to when they were young.

She explains, “It's so funny because now that my friends have heard the song and now that's it released, everyone from my town is trying to find where they're mentioned in the song because you just know it was a real story, so it's so funny.

Her best piece of advice for young women who want to get into music? She says, "I think what they have to know before going in, first of all, is that it's a lot of sacrificing and if it's something you want to do you can really work to get it. You have to continue to practice and grow everyday doing what you want to do, then go for it. I had to figure out what made me different because a lot of people try to tell you those differences are bad, but those are really what separates you from everyone else at the end of the day."