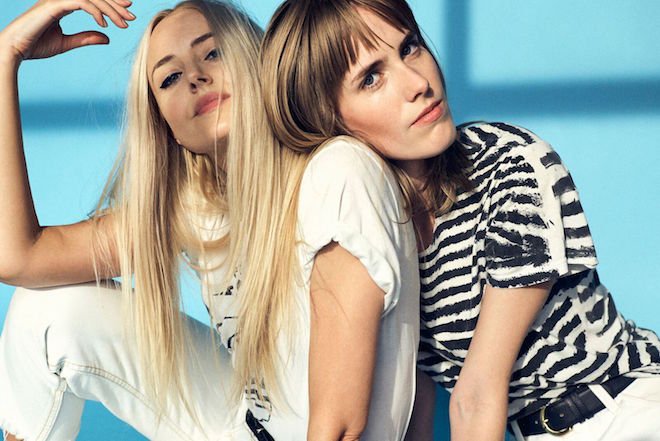 Fever High is the Brooklyn based synth pop band you need to listen to. Reni Lane and Anna Nordeen describe their sound as “rebellion/girl-on-girl/rock and pop-new wave”, a hefty description that fits the bill.

They met through mutual friends. Nordeen was working with Adam Schlesinger on their first Fever High EP, All Work, when they were introduced to Lane. “It was like a blind date,” Nordeen jokingly says. Lane laughs as well and they describe how their personalities worked and they became friends and bandmates easily.

Their influences include Blondie, Bananrama, and Book of Love, and countless girl groups spanning from the 50’s. Strong, fun, and bouncy, their music is able to capture many of these sounds and effortlessly blends these ideas. When I ask what is the common thread the answer is simple: “synth.”

FHNY, their EP that was recently released on November 10th, is inspired by some real life conversation and events. ‘Spit It Out’ was inspired by a conversation Nordeen had with her brother. “He was talking to me about his girlfriend” she says, and finally she told him to just be direct. They sing: “If there’s something on your mind/ Why you wasting all your time?/ If you want me tell me now/ Spit it out.” A common struggle anyone in a relationship knows to be true, their playful song is an anthem for women who want answers and not games.

As we discuss their EP, they tell me that some of the songs were easy to create and even after they were finished they had after thoughts about how to improve them. ‘These Boys’ included a phone call between Nordeen and Lane. “What are we gonna do about these boys? / I don’t know./ Are they ever gonna learn? / I don’t think so.” Lane believes their second EP “has more of a bite to it. It’s moodier.”

On ‘Good Advice’ featuring Jeff Goldblum, Lane says “We met through a mutual actor friend… I like to joke that I have Jeff Goldblum’s number in my phone but he’s a really sweet guy. He sent us an 8 minute rant… Adam had fun picking out the pieces for the song.” The song features a snippet of the rant and conveys that even people like Mr. Goldblum have to put up with terrible or unwanted advice.

When I ask which song was the easiest to write and record Nordeen jokingly says “The cover!” She’s referring the track ‘Casting My Spell,’ a cover of The Renegades that Nordeen loves. She is very into Halloween and wants to create an entire album dedicated to it but for now is settling with this spooky track. The video was shot by Andy DeLuca, an up and coming rock and roll photographer. “Most of the interiors are shot in Adam’s bar and the rest is shot around the city.”

Now that they’ve released their new EP, they’re planning on focusing on creating music videos to accompany FHNY and to take some time of of recording music until January. As far as writing music, Nordeen gives me her take on it. “It’s not like going to the office and saying I’m gonna write. Sometimes while I’m washing the dishes I’ll write and entire song in my head.” Even though she, Lane, and Schlesinger all write music together, it can strike them individually at different times.

Advice they give to other young women starting out in the music business is to create for themselves and be true to their sound. “Fuck what everyone thinks,” says Nordeen half jokingly. Nordeen and Lane share the advice and would tell themselves the same exact thing, as both women have had previous albums released with labels. “I didn’t know I could advocate for myself … now I’m a stronger voice than I was then,” remarks Lane.

When I ask them who they’re listening to now, Nordeen excitedly tells me about a band they’ve toured with, Nation of Language. “They’re so good. So so good.” When they’re not working, touring, or recording, they like to hang out at Schlesinger’s piano/karaoke bar. Anna’s go to songs are any by Patti Smith, ‘Nothing Compares 2 U’ by Sinead O’Conner, and Fiona Apple’s ‘Criminal.’ “It depends on your mood. Sometimes you want to be serious and other times you want to be naughty,” Lane points out.

Besides making music, the women of Fever High have lives off of the stage. Nordeen works for the New York Times and Lane records music for other bands around the city. After interview, Nordeen plans on going to work, to the gym, then taking a nap, telling me that power naps are the secret to their success. Lane is going to piano practice, to babysit and teach her client’s child how to play the bass, and hit up some shows.

Both are very excited for the EP and hope people enjoy it as much as they do. Listen to their EP ‘FHNY’ on Spotify and keep up with them on Twitter and Instagram.