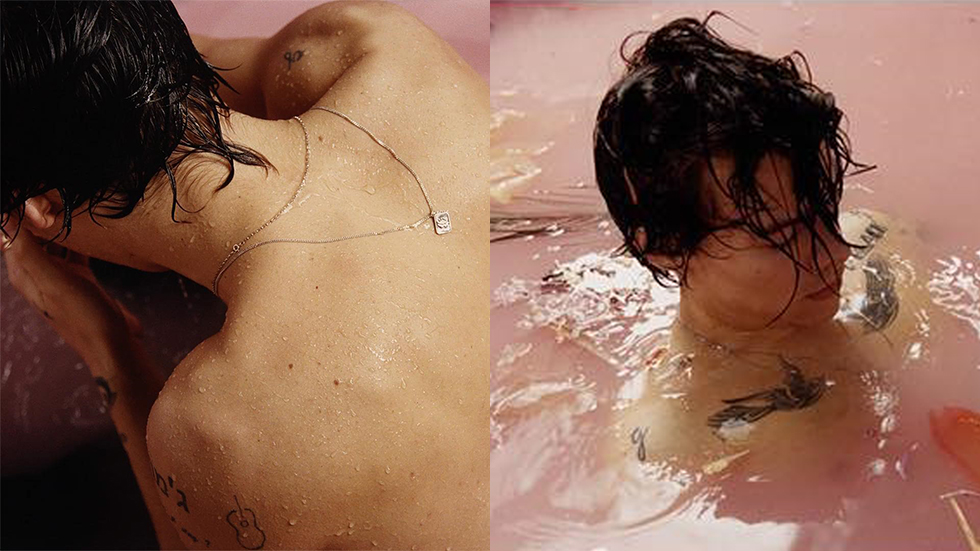 Kasey: THIS IS THE LAST TIME WE GO TO SLEEP WITHOUT KNOWING SOLO HARRY STYLES

Kasey: I am too, I just have NO idea what it’s gonna be like, SEE YOU ON THE OTHER SIDE

These are my late night texts with Kasey on April 6th, I had set my alarm for 2 a.m. central time when Harry Styles was releasing his new single and the world was waiting. After One Direction broke up we saw Zayn and his alternative sexy R&B jams, we say Niall’s turn into light folk, and Louis collab with Steve Aoki. Harry Styles was acting, he was going to be in Christopher Nolan’s Dunkirk, but we had no word of a solo music career.

I couldn’t sleep, I just started to scroll through Twitter seeing what all the fans were up to. I have to take a second to note that I was not a directioner, don’t get me wrong, I appreciated them in a sort of editorial sense. I’ve never been to one of their concerts or bought one of their albums but I kind of kept it on as guilty pleasure music. It had been a long process for me to come around to admitting how great ‘Made In The A.M.’ was. So this impatient waiting for Harry Styles was not in character for me at all.

“I feel like I’ve been hibernating in the studio for so long…it’s time to give birth,” Harry said before debuting “Sign Of The Times,” which already melted my heart being released on the 30th anniversary of Prince’s phenomenal album.

From the soft, melancholic piano in the beginning to the building and dynamic chorus. His voice drifting between a snarl and a light falsetto drifting over fuzzy guitars. I was immediately hooked and in tears. It was spacey and glam and far different from anything any breakout boybander has released.

“Meet me in the Hallway” immediately takes me back. It’s giving me some hardcore Turtles vibes, “Meet me in the hallway, I just left your bedroom,” Styles croons, this screams 60’s rock n’ roll to me. Drifting up and down to highs and lows this song is more chill than a usual opener, but we’re getting some spacey effects over the simple acoustic background and overall it’s mellow and yearning.

“Carolina” is a standout to me. This sunny California rock vibe. “She’s got a family in Carolina..” Styles starts. I’m into the storytelling aspect here. This is driving down the road, windows down, sunshine, music. “How could I tell her she’s all I think about, well I guess she just found out,” is a clever lyric, whether it could mean the press is so on Harry that as soon as this album drops this girl will be well aware. I’m sure she definitely is now.

“Two Ghosts” has been raising eyebrows by being about Taylor Swift, nothing controversial here. If anything it shows Harry’s maturity in his music. Maybe we can all let it rest now? We’re back on the Jackson Browne vibe on this one. “The moon dances over your good side” is lovely lyric but we’re getting a little repetitive again in this chorus and even though it’s lovely, at this point I’m curious where my “Sign Of The Times” Harry went?

Now “Sweet Creature” makes me feel like when someone puts their hands on my face and looks into my eyes and sweetly breaks up with me so that I have no clue. It’s comforting but overall it’s kind of heartbreaking. It also reminds me of a song that I cannot put my finger on to save my life.

Now the reason I’m already liking “Only Angel” is this alien abduction beginning with this voice that’s whispering over soft piano. AND NOW WE HAVE A YELL, right on. We’re getting Jagger up in here and I love it. Here we go. “Splinters in my knuckles crawling cross the floor, couldn’t take you home to mother in a skirt that short,” rock on Harry. Now we have hand claps and backing vocals, which in my opinion, makes a song catchy. “She’s a devil in between the sheets,” alright, let’s just push away that sweet Harry aside.

“Kiwi”is packed with controversy. Harry screams “I’m having your baby it’s none of your business,” who is this about? who is having Harry’s baby? We don’t know, but this is a jam. I’m stoked to see this live. I’m thrilled to hear rock music live, and bringing it back to the radio. Roaring guitars and pounding drums with screams and yelps from Harry, I am ready to go.

Now, “Ever Since New York” is softening the blow of “Kiwi”, we’re back down to my mellow jams, beautiful little Zombies-esque guitar melodies. This track doesn’t particularly stand out to me, but that’s totally fine.

“Should we just search romantic comedies on Netflix and see what we find” is the opening to “Woman” then Harry sings, “I’m selfish I know, but I don’t want to ever see you with him, I’m selfish I know, I told you but I know you never listen.” the light guitar and vocal distortion are making this. The “La la la la las” are keeping it classic, even, dare I say, Beatles influenced.

This is a damn sexy song. Like making eye contact with your ex from across the bar and knowing things aren’t over, and here is this guitar solo, with that lovely piano underneath it. Im ready for the hate mail when I say Harry is brining guitars back to popular music. Show me someone else that can do that? (Plz don’t say John Mayer) I’m not saying he’s playing them but bless him for using them. I’ve missed instruments.

Now “From The Dining Table” is the last song. This is a sparse finale. Harry barely speaking over a lone guitar. “Why won’t you ever say what you want to say…” he asks. Then the strings come in “Maybe one day you’ll call me and tell me that you’re sorry too.” The strings swell into the chorus, overall a pensive and quiet ending.

Overall, the album is beautifully done, especially for someone from a heavy pop background, it’s refreshing to see Harry going this way with his career. I feel like he could’ve done anything. Event hough the choruses are often repetitive and not as elaborate as I would like, it shows so much potential. There’s a couple of hard jams that I know I’ll be coming back to. His very transparent 60’s and 70’s glam rock influences are turning point for modern music. In a world where instruments are slowly dying out it’s beautiful that he’s using them and highlighting them on this album. I know there will be a lot of snark out there about Harry Styles going this way and I think it’s a bold move. His voice has matured with his style and he’s still very young, and I”m excited to see where his musical career heads after this.