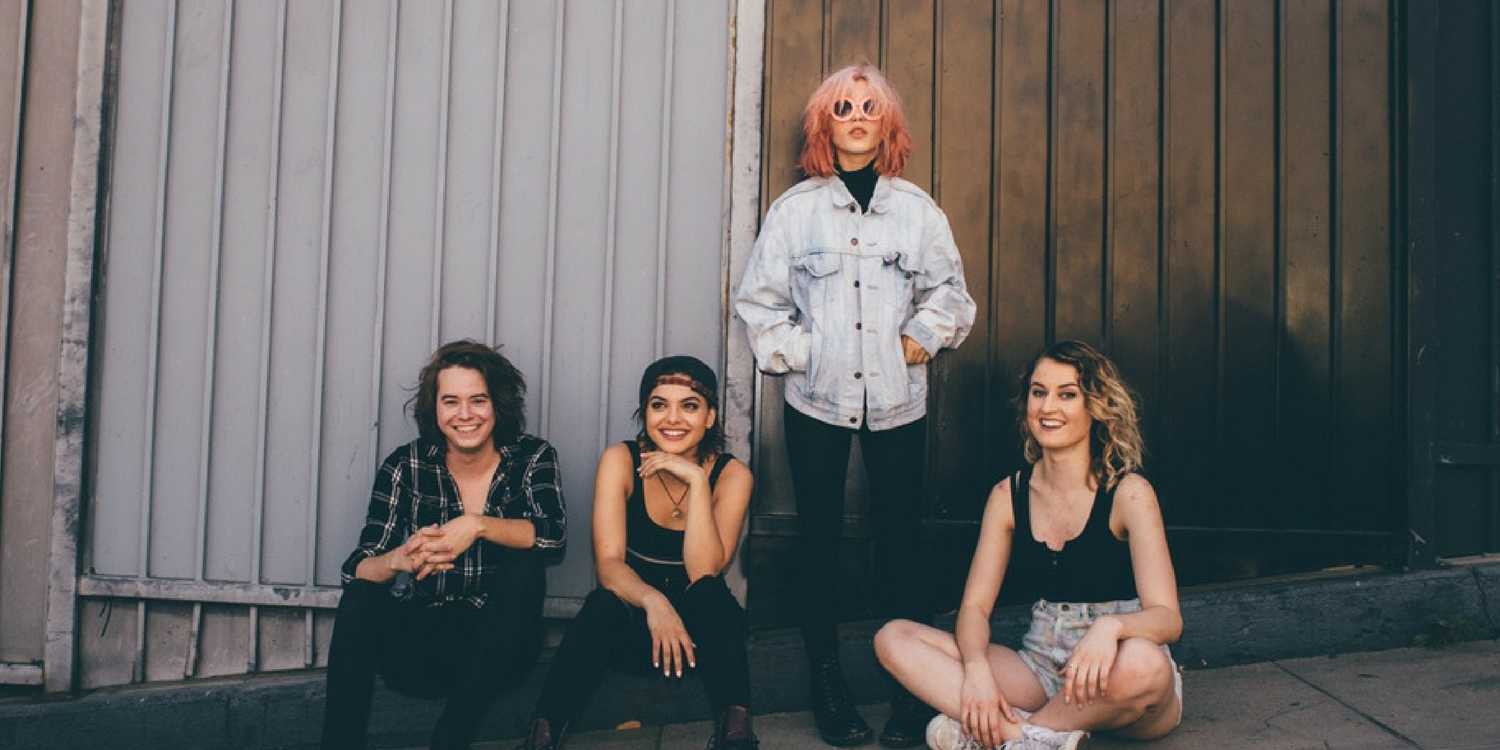 The first time I saw Hey Violet perform, I knew Rena and I would get along. I got the cool opportunity to talk with the front-woman of HV and we gushed about the release of their second EP, a little bit of love, and world domination. Brand New Moves released just a few weeks ago and I won’t even lie to you – it’s been on repeat since then. If you heard their first EP, I Can Feel It, you’ll know Brand New Moves has a different sound. Less rock, more 80’s inspired.

Rena Lovelis tells me they collaborated with one producer (Julian Bunetta) to write the songs and shape their own sound with Brand New Moves. Bunetta has a knack of producing some pretty outstanding work. After all, he was pop sensation One Direction’s producer. “Working this way made the process much more focused and cohesive and we love what came out of it,” Lovelis says. The group draws their inspiration from artists like Melanie Martinez, The Weeknd, and St. Lucia. All amazing vibes, if you ask me.

The band is currently opening for sensation 5 Seconds Of Summer but the alt-pop group just recently they played for a hometown audience at Los Angeles’ Echoplex. The band is made up of Rena (lead singer), her sister Nia Lovelis (drummer), Miranda Miller (keys, vocals) and Casey Moreta (lead guitar). Touring with a sibling might be pretty tough, but Rena assures me it’s great. “We sometimes argue, as sisters do, but we let go of stuff so fast that it doesn’t matter. We’re all basically brothers and sisters in the band, so i’d say I’m part of a really good squad,” says Lovelis. I asked her if they would keep the momentum going with more solo shows, she assures me, “Definitely. We are working towards a full album and want to keep playing as many shows as possible, meeting as many fans as possible. Y’know, takin over the world ideally. The usual.”

Taking over the world? Sounds like this group is already there. They recently just won the 2-16 Teen Choice Award for “Next Big Thing.” Plus ‘I Can Feel It’, was number one on iTunes in five countries, including the U.K. With this success, it’s safe to say the debut album, which will be releasing next year, will follow in these footsteps. While touring with 5SOS, they managed to play in front of a sold-out crowd at Madison Square Garden, the peak of any artist.

“Performing at Madison Square Garden was definitely a mind-blower for us. Miranda, Nia, and I all started tearing up throughout the night and hope to headline there someday. Honestly though, all the venues are really cool because we get the chance to meet new people and play in new places,” states Lovelis.

This was inevitable. Rena and I talked about everyone’s favorite topics, love…and fuqbois. “Brand New Moves” gives you a whole new take on love – which is what we need, right? With lyrics like “since the last time we danced I learned some brand new moves / I wanna try them on you” how can you not be obsessed? “Pure” does the same. With a hook like “I crawl out my skin, things I tell no one else, things I show no one else but you” creates the greatest intimacy and draws you in. “Fuqboi”, on the other hand, is an anthem for every twenty-something on the dating scene. I think it’s safe to say we all have experienced this encounter at least once. Rena says, “I have to say a thank you to every fuqboi out there for inspiring this song. We all have that one guy that we dated or thankfully avoided dating due to fuqboi-esque-ness, haha.” I think this hits the nail on the head. Plus, the line “I’d rather cut out my tongue than let you kiss me with yours” is pure gold.

Touring with the guys of 5SOS doesn’t seem to be the easiest job (kidding, obviously!), but Rena tells me it’s “incredible” (no surprise!) and is “grateful for having this opportunity in the first place, but also being able to reach so many people along the way that are our age and who relate emotionally.” She tells me they’re both on this journey together and if they can inspire just one person, they’ve done their job.

With their journey to game, I think it’s safe to say this group has already inspired more than just one person. We asked Rena if she had any advice for young women, and of course, she did. Lovelis tells young women wanting to take over the world this, “Create your own path. Don’t look to the world’s standards to define how much a young girl or a woman can achieve in her life. Believe in yourself first.”