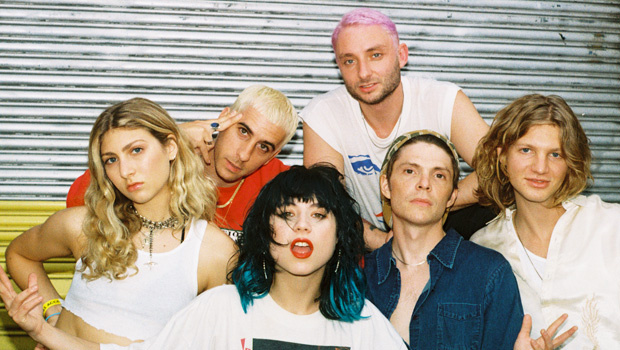 I don’t think anyone else is doing what KITTEN is doing. The band as a whole has transformed into full form with their latest EP “Goodbye Honeymoon Phase.” It’s the early aughts twisted with punk and it’s hella fun and hella emo.

If you don’t know KITTEN, I had another band tell me, “No one burns calories on stage like Chloe.” A statement that can only be explained with their live show. Stage presence doesn’t being to describe it. Sometimes I get nervous just watching her drop from higher and higher at each show while completing elaborate choreography between each act of bravado.

She explains, “I’m okay with saying I think I was born with that energy. I think I’m very impulsive, and when I get on stage that’s when I let it out. I’m completely present in the moment and I’m challenging an energy that’s not my own.”

For those who have followed big-haired Chloe from the self-titled era, you’ll see that transformation. She says, “I think there’s a lot of focus on the music and I think that I’ve finally gotten away from the ‘eighties’ sound that we’ve been living in a while, which is fine, I think we’re on Pluto being emo now which is fun.”

With the first taste being the honey-soaked “Memphis” a train-of-thought reading that brings to mind a slide-show of memories of a former lover, one line stands out: “I’m an Avril girl.”

It’s evident that Chaidez recognizes Avril Lavigne as the queen she is, a true beacon of early feminist pop-punk. If that seems like an overstatement, Avril was a breath of fresh air for the girl who never seemed to fit in.

Chloe digresses, “For years and years I didn’t really acknowledge publicly how much I looked up to Avril Lavigne and how much ‘Let Go’ meant to me as a kid. It was my first record I remember buying. It had a really deep impact on a lot of young females around my age. She is and was an icon. That line in “Memphis” it was a very fluid moment and it’s interesting how I realized how much she meant to me retroactively.”

The EP is speared with the triumphant “ME” a damn anthem. “You don’t know what it’s like to be meeeEEE,” Chloe shouts over flawless production. It’s a statement. Asides from KITTEN, Chloe is in Nasty Cherry, the mega-band formed by the iconic Charli XCX, and it’s clear the constant cameras were on the mind. With KITTEN songs, a striking visual is always around, and “ME” the theme was 2000’s reality TV.

She says, “As everyone knows, the making of this EP I was filming this Netflix show. I wanted to show what that was like to me and its an homage to some of our favorite reality shows of the early 2000s and obviously the Bachelor is still going on.”

As for Nasty Cherry, we have to wait to watch it all unfold on NETFLIX, but everyone in KITTEN has multiple talents and projects.

Chloe and Blu have the most enviable friendship. Two amazing women taking on fashion and music and kicking ass. Chloe is in Nasty Cherry, Max has a fashion line and Parker, Dave, and Rex are brilliant with their distinctive production.

Chloe says, “With Blu, she started a solo project and you have to embrace it with open arms. That’s the culture of KITTEN, Max has an archive clothing company called artifact, New York. We’re multi-faced artists, which sounds so pretentious, but we want to empower each other in the band and outside. It’s not the easiest thing but working with Charli is extremely inspiring. Watching her shift her ideas, she’s multi-faceted so why can’t Chloe Chaidez be too? Scheduling was tough but you’ll see on the show.”

That kind of attitude is changing the modern music age, we can get out of what matters on charts and the radio because no one really cares anymore. It’s about that essence that Laurel Canyon left, a camaraderie of brilliant musicians all joining together. Just a different version of that. It’s something Charli XCX has been strongly propelling with her collabs with up-and-coming artists, and something we see in KITTEN, all supporting each other and other indie artists.

Chloe elaborates, “I think in this internet age with such direct communication there’s no excuse not to support the artists around you that you love. You could either be intimidated by someone you love or choose to support them and stand on a podium together. I love collaborating visually and in writing.”

It feels especially estranged with women, something we’ve been conditioned to do: compete with each other. It’s a fucked-up system and in the “cut-throat” music industry it’s all too common. Chloe has this gem of advice, “You can do one of two things if that’s a demon for you, and if you’re thinking about other artists and even if another woman walks into the room and you’re intimidated. Kill it with kindness and conversation. Just think ‘I love this bitch.’ Squash it and hold that hand on the podium.”

Chloe ends the convo talking about how amazing her band is. She brags about Parker, Dave, Max, and Rex and how incredible they were with producing the music.  She says, “Kitten wouldn’t be what it is without them, listen to the EP and watch the Netflix show.”