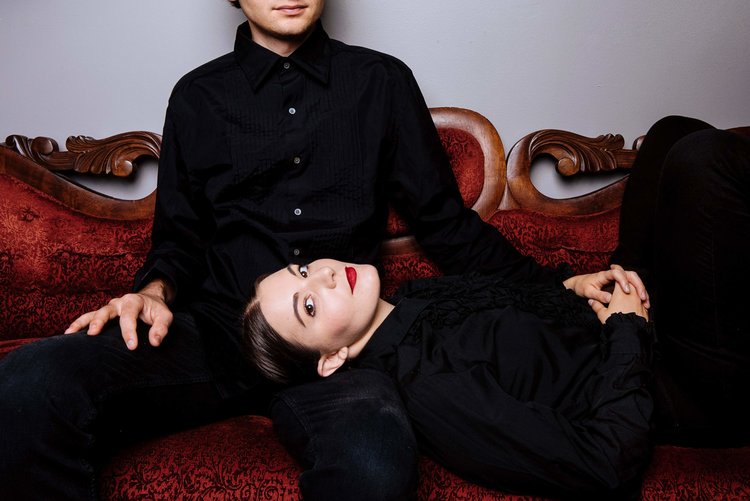 If you’ve ever avoided bars, coffee shops, or even an entire side of town after a break up, you’ll relate to Misty Mtn’s newest single ‘Guess Who’s Back.’ The self-described dark-mountain pop duo defies genre, blending pop, folk, and electronic influence to create catchy, but emotional tracks.

The Brooklyn based band met working at a restaurant together. “Pretty shortly after we met each other we began writing music together. It started off pretty casual, with us just pulling out the acoustic guitar to write songs and then one day we were like ‘oh we’re really good at writing music together. Why don’t we do something more with this?’” said vocalist Morissa Trunzo.

Their sound is a blend of the folk Morissa grew up singing in Montana rodeos, and guitarist, Lucas Segall’s, experience in Los Angeles indie bands. As much as I want it to be a Lord of the Rings reference, Misty Mtn actually a conglomeration of a few different influences.

“When we started writing it felt rooted in a very folksy place, and obviously it moved to pop, but we wanted to encapsulate what we are inspired by,” said Morissa. The “Misty” part of Misty Mtn was inspired by a horse Morissa had growing up, “she just showed up in my yard one day like in the dusk and she was this beautiful white horse, so I named her Misty.”

But it was a Bob Dylan song that served as the deciding factor. “We threw around Misty Mountain along with a bunch of other names, but we weren’t sure so we were like ‘ok let’s just shelf this for a minute. We can deal with this at a later date.’ Then one day we put on the Ken Burns Vietnam documentary, and at the very end of the episode this Bob Dylan song came on saying ‘I have wandered through twelve misty mountains’ and I heard that and we paused it and rewound it and listened again and decided then and there that it had to be our name,” explained Morissa.

“We draw from everything and then just try to make a really solid song that works on its own as a song and then explore from there,” said Lucas, who does most of the producing and instrumentals. He cites Bjork, St. Vincent, and his love of classical music as major inspirations on his process, but the duo starts most songs with just them and an acoustic guitar.

They also cite New York as a well of inspiration. “It’s interesting how every artist is inspired differently by New York City. You hear so many songs that are like ‘my dreams are coming true here’ and we want to write songs for the people who are really struggling to make it happen and still love living here and are not discouraged,” said Morissa, “We encounter so many people who are kicking ass, but at the same time are having to bang down doors to do so. It’s incredibly inspiring writing in a place like this.”

“‘Guess Who’s Back’ is definitely a New York inspired song without even meaning for it to be,” said Morissa. “I wanted to write something that described that moment when you drive past a person’s house every single day even after you stop seeing them. You’re just consistently reminded every day of these times, whether it be by seeing their light on and remembering being in that room with them or hearing someone having an argument on the street and thinking ‘boy I’ve had that same argument’” explained Morissa referencing the opening verse of the single, “I was walking down the street and saw your light/ the one in your bedroom/ the one I once knew.”

Misty Mtn perfectly encapsulates that feeling of painful nostalgia that may force you to take the long way home in an effort to avoid an unwanted trip down memory lane. The sentiment driven home by Lucas’s moody guitar layered perfectly with Morissa’s deepy and powerful voice before building to a climactic and catchy chorus that you will catch yourself humming for days.

“Guess Who’s Back” explores something we have all felt. Maybe it’s that coffee shop where you went on your first date, or the bench in a park where you had your first kiss. Or it could be a negative association “I was walking down the street and saw a fight/ the one I remember/ the one where you lied/ said you would come back but needed time.” Either way, it is an exploration of how places can be forever associated with someone even after you’ve closed the door on the relationship.