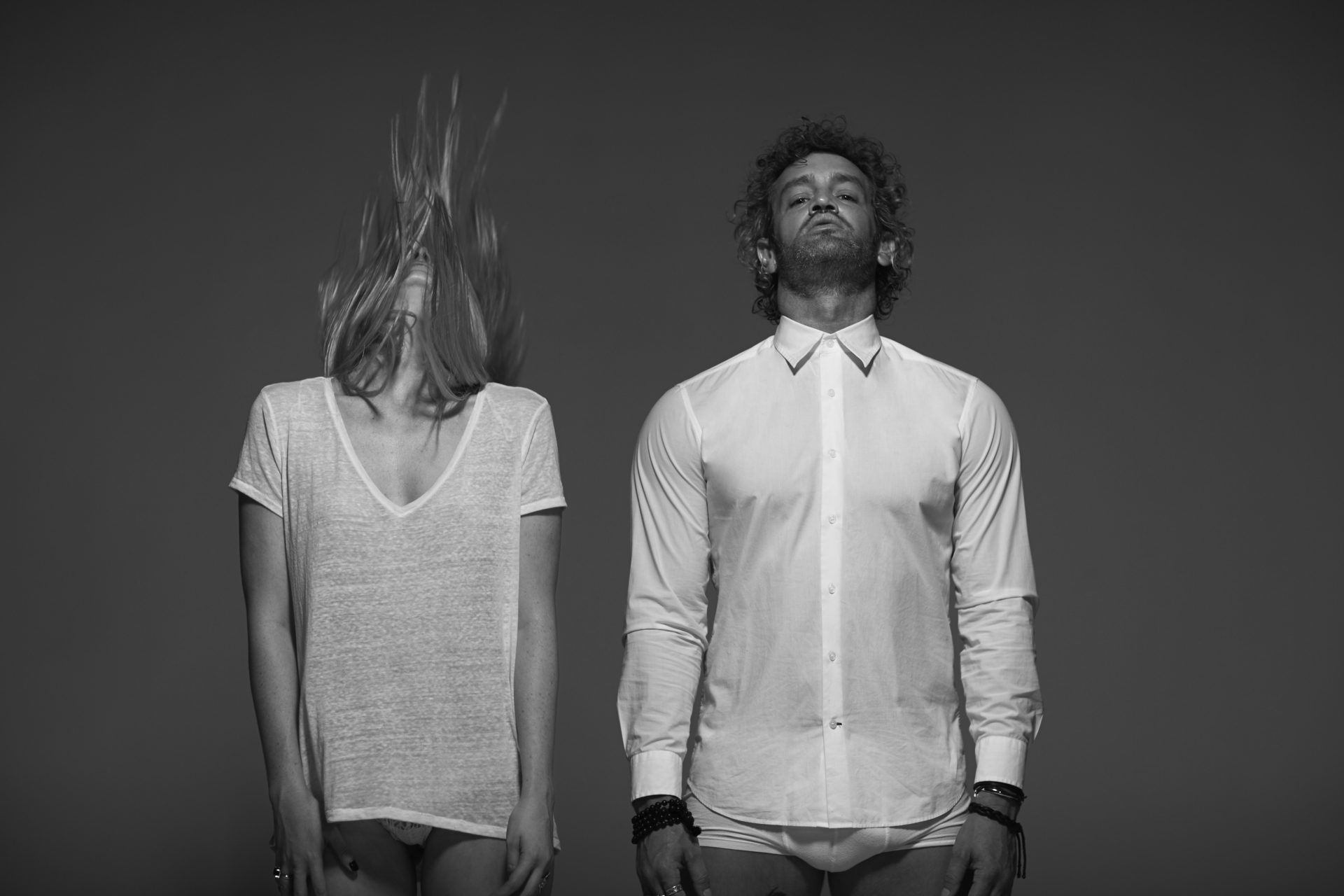 When I first saw The Rigs new video for "When We Were Young" it just felt so nostalgic and beautiful. The song is laced with tribal chants and light vocals. I talked to TJ Stafford and Caitlin Parrott about the making of the video and their musical chemistry.

CP: Music has been my life since I was really young. My dad was the front man in a Christian Country Rock band and I was 4 years old the first time I set foot in a recording vocal booth. I started playing piano in elementary school and my dad gave me my first guitar for my 16th Birthday. Even as a kid, I was always way more interested in creating my own songs than playing what was on the page in front of me, but I think high school was when I really developed a love affair with songwriting.

TJ: Initially, it was frantically toddler-dancing to the Beach Boys' "Barbara Ann" anytime my parents threw on "The Beach Boys Party!" album. That's my first memory of being 'into' music. Playing-wise, my mom got me a guitar when I was five and told me I was gonna start taking lessons.  I did, and it was miserable, and mom would sit diligently with me every night to practice. At the time I just wanted to be outside playing or wrestling with dad, but now I couldn't be more thankful for that 'miserable' period. It set a deep foundation I haven't been able to shake loose from.

How did The Rigs first form?

CP: TJ and I have actually known each other for well over a decade. We played music together in other bands and supported each other’s solo projects for years before we ever considered a joint project. We had to go through some tumultuous times both individually and together before the idea to write together came up. And even then, it was really more as a form of therapy and catharsis than it was a desire to “be a band”. But when we started writing it felt like fire. Really natural and really good. The first few songs we wrote immediately got licensed for some pretty great TV shows and that’s when we figured we should probably make this thing official.

TJ: Yeah, the music formed because Cait and I needed to work some shit out and words-only discussions were....sensitive. So we decided to write music instead. And the music quickly resonated. So quickly that The Rigs as an entity formed out of playing catch up to what our music was already doing.

What has been the biggest challenge you’ve faced in your career?

CP: Personally it was just finding the will to keep going. I dropped out of college at 18 because I was sure there was nothing else that would fulfill me like music. 8 years later I found myself jobless and heartbroken with no real musical prospects. So I packed up my things and drove up the coast to stay with my parents in Seattle because it had all just become too difficult. Thankfully, the 7 weeks I spent there really just reignited my passion. I missed the hustle. I missed creating. I missed performing. I had to find a way to make it work. And it was then that I decided that even if I never “made it” as a musician, I HAD to keep playing, writing and singing. It was too big a part of me. And by the grace of God, I’ve been able to hold onto, and even realize some of that dream.

TJ: Same. Losing everything because of my dream was by far the hardest thing I've ever gone through. Just before Cait and I started writing together I had been through a period of my career where I had never worked harder and had less to show for it than when I started. And by less I mean nothing. I watched friends and girlfriends and money and housing and self-respect just slowly disappear and no amount of hard work stopped it. Deciding to keep going at that point was the most desperate decision I've ever made. It was not pretty, and there was no strategy or big plan at that point. It was just survival. My dad told me during that period, after a moment of literally crying on his shoulder, like, snot on his shoulder sobbing, "When you're riding through hell, keep riding." And that was it. It was just the idea to keep moving that got me out.

CP: It’s always been super collaborative with us, but the actual process varies from song to song. Sometimes I’ll have a cool chorus hook and TJ will write the verses or maybe TJ will have a really cool instrumental line and we will write around that. Every once in a while there will just be an idea or phrase one of us comes up with and we will get together and write a song around that. Then we bring it to our amazing producer, Michael ‘Smidi’ Smith, and he adds his production magic and turns it into gold.

TJ: It's always varies and always feels like a miracle. I'm convinced that every song I write is the last song I'll ever be able to write. Still not sure how it happens, but somehow we move from silence to words and melodies and there is something where there was once nothing. And WE did that. That's crazy.

Tell me about the song When We Were Young?

TJ: Ha. Over the years Cait and I have had many deep discussions about my personal life and thoughts on love and whatnot. At one point I had told her that I didn't think I was physically or psychologically or emotionally capable of falling in love again. Not that I didn't want to, but that I just seriously didn't think I could, or ever again would. After one of those discussions I started thinking about those moments of falling in love as a kid, whether it be with a person or an experience or a toy, or whatever, and how innocent and intense it is. Then I started to get sad when I thought that we as adults could never experience the purity of that kind of love anymore, then I got nostalgic and weepy and came up with the gist of the song. It was melodically, lyrically, and musically much simpler and sweeter than almost anything we'd ever written, and that felt right considering where the idea of the song originated. I needed something simple and sweet and innocent for my complicated psyche.

How does the video represent that?

TJ: It's just home videos of me and Cait when we were kids. Pre-damage, as it were. This song didn't need something visually complicated to get the point across, and it didn't even really need a story, it just needed a 'feeling'. Nothing gives that feeling like music set to 8mm home vides.

What is your best advice to a young musician?

TJ: Become great at your craft. Not your gift, or your inspiration, or some such artist-y nonsense. Your craft. Then don't stop moving. Ever.

CP: Expect it to be difficult. Do it because you love it. Never stop working to improve your craft.