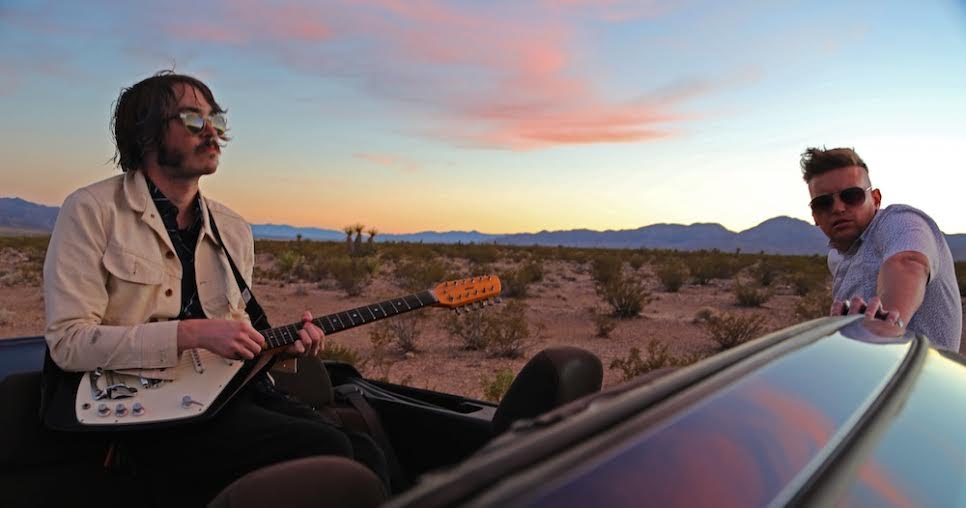 You ever have those nights where you get on a music rabbit hole and its 2 A.M. and you are finding new bands you have never heard of?

Well, in this case, that’s exactly how I came across Aussie-American electro-psych duo, Vox Eagle. Ironically enough their lead single, “No Sleep”, was the track I found. Consisting of members Andy Crosby and Luke Hamel, Vox Eagle uses experimental instrumentations combined with deep synths and driving beats for a sound that caught me off guard.

With their debut EP coming next month it’s my pleasure to introduce to you Vox Eagle. I spoke with the duo to get the scoop on their upcoming year.

Coming from two different bands and locations, I asked how the two decided to collaborate on this project. Andy recounts the story: “I was living in New York and Luke was in LA. We met through another friend who introduced us while Luke’s other band was touring. Our first real meetings were on a tour bus together, writing songs, sharing influences, and what we really enjoyed musically. We found we had a lot of common similarities and things we thought that could work really well together. We talked about it some during the rest of that tour and about 6 months after we decided to get together and do this EP. Many late night talks driving city to city. We both came from rock backgrounds and wanted to move more towards party music. “

One of the listed influences on their Facebook page that stuck out to me is Hall & Oates. Having just seen Hall & Oates in concert, I approve 100% about that influence. “The big thing with this project was that Luke and I are both really into top line melodies. These big hooks and choruses come from the prime example of Hall & Oates. They just nailed the melodic top line, electronic music.

With two singles out, “No Sleep” and “Come Over”, and a matching music video for “No Sleep”, I wondered how they are feeling from the responses thus far. Luke explained: “It’s be great. We released ‘No Sleep’ without any real press behind it and just to friends. It unexpectedly took off on Soundcloud, got half a million streams, and did decently on Spotify via word of mouth. When we were working on the EP in Colorado, we looked at our Twitter mentions and saw that some radio station had put us on their Hot 8 at 8 playlist. We did some research and found out that radio station was located in Uganda and kind of freaked out about how they found us. It continued to climb their chart up to #2 until we were kicked off the list by Iggy Azalea. We were going to make some shirts that said ‘Almost Famous in Uganda’ but haven’t gotten around to it yet.” Andy chimed in: “We were just so blown away. This country half way around the world had us on their chart. It was pretty incredible waking up to that. We want to get over there and maybe shoot a video, it’s in the cards.”

The upcoming 6 song self-titled EP is coming but I wanted to know what the band had in store for us this summer and the rest of 2017. Luke filled us in: “The release of the EP is next month. Andy is going to be in LA next month and we will be doing a release show and small DJ sets. We want to see where the EP is getting support and work up to touring some this fall.” Andy continues, “Our goal is to see where the most traction for tours could happen. We’ve been talking with agents as well.”

Outside of influences, I tend to wonder what our artists are really into in general, or what they are listening to themselves. Luke informed me that they both really like MGMT, Foster the People, and Tame Impala. He said these sparked the idea of Vox Eagle. Andy also explained that even The Beatles and the Beach Boys elements have translated well into the make up of Vox Eagle as well.

Be on the lookout for the debut EP out next month but for now check out their two singles and the music video for “No Sleep” below.