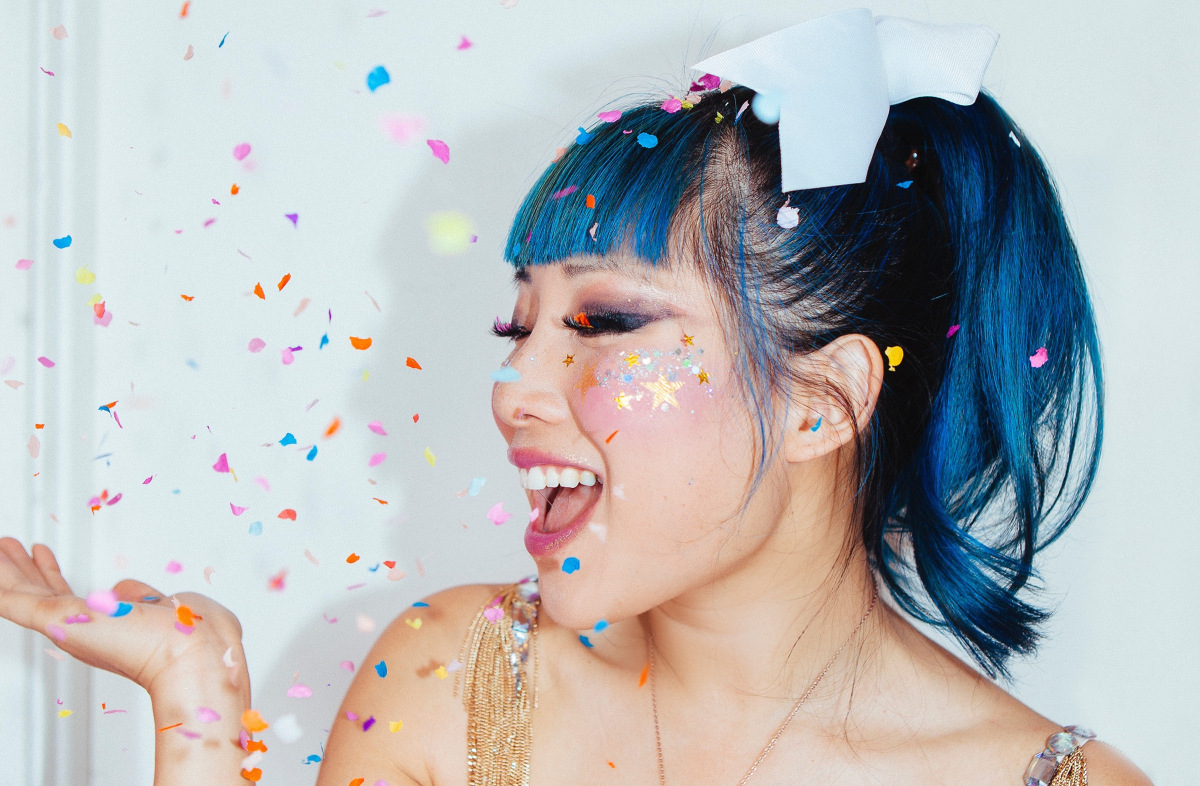 Polartropica is one of the hottest acts out of Los Angeles right now, as soon as I saw her whimsical outfits and bright blue hair I knew this wasn't just another show.

Tell me about how you developed your aesthetic and your performance?

Polartropica: I played with a lot of different bands, and I learned a lot. For the visual aspect: my favorite part of going to shows, and just art in general, you want to feel like you’re transported to a different place. It’s not reality, and it’s not real life, those are the most memorable performances. I wanted to create that for other people. We’re in this magical place for the night.

Polartropica: It can be as easy as getting lights from the dollar store. We did a radio show and we brought in a fog machine and disco lights with sound sensitivity. We set off the fire alarm but we really wanted to bring the whole show. Even if you can’t see it, when you listen to it, that creates an environment that’s different.

Tell me about your new song “Wild Lyfe”

Polartropica: It was inspired by a trip to the National Zoo in Washington D.C.; I was there for my sister’s wedding. We thought it was going to be a fun day. When we got there, it was the opposite. It was stressful because the animals were stressed. The gorillas were so overcrowded, and they were in this tiny space. There were kids screaming everywhere. The tortoise was 75 years old and in the glass cage that wasn’t even big enough for him to turn around. It wasn’t a good existence. After I got back to Los Angeles, I was watching the Island episode of Planet Earth 2, and there are these iguanas that have to make it to the ocean and there are these snakes that are chasing them. I thought I’d rather be one of them than a tortoise stuck in a cage. I think people are more aware now, and they’re more aware of wild animals in captivity. Rehabilitation is different but zoos breeding generations of animals, it’s so sad.

What has been one of your biggest challenges?

Polartropica: My biggest challenge was getting over my fear of uncertainty and of things that were outside of my control and being able to trust that no matter what I did, everything will be fine. Trusting your own artist's vision and that even if it’s not perfect, it’ll get better over time. When I was first starting, I thought my biggest challenge would be more about being a woman in the music industry. Which is a challenge, and I did have trouble, there were many times I thought I wouldn’t be taken seriously, but I realized that focusing on that instead of looking for other ways… if I wanted to get something done it was more about finding a way to make it happen. A lot of my challenges are in my head. It doesn’t matter what people say or think; it’s more about what’s good and I kind of wish I could tell myself ten years ago that everything will be okay. All that self-doubt is totally unnecessary.

How do you work through the self-doubt?

Polartropica: I have to be kind of defiant with myself when I hear it. I have this voice telling me it’s not a good idea and nothing will happen. It’s about having to come back out of it. I had a friend of mine say something that really helped. He said, "There’s never any problems, when you come to a project it’s not about the problems, just focus on the solutions, how can you work this out.” That’s the key to moving forward. I still get nervous before shows and sets and it’s about powering through.

Polartropica: I’ve always been a big movie fan and I’m so inspired by visuals. I have a lot of friends that are talented artists and photographers, they’re really inspiring. I’ve been going to a lot of shows but lately I’ve been gobbling up documentaries.

Polartropica: Find a community that you can thrive in and in Los Angeles when I first started playing music I was always the only girl. Now, every show I play in or am a part of, the majority is female-led bands or all-female bands. It takes time but go to shows, meet people, talk to people, and find a way to be a part of it. Those people will be your crew and you can support each other. Wherever you are there’s a community.