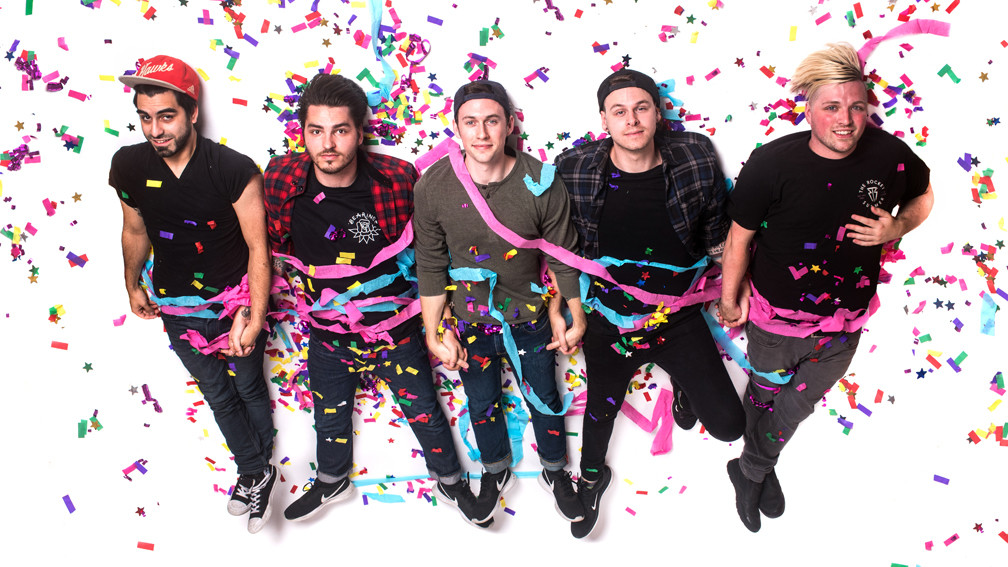 I am a product of the Warped Tour scene. Most of my teenage years were full of rock, pop punk, punk rock, the whole gamut. At this phase in life, I am enjoying 10-year reunion shows, some bands getting back together, but one aspect I love is seeing new bands come forward. These bands inspirations and influences come from those I grew up with. The sound is apparent and I am seeing it all over the scene. One great example is the Chicago based pop punk band, Sleep On It. The band currently consists of lead vocalist Zech Pluister, lead guitarist and backing vocalist TJ Horansky, rhythm guitarist and backing vocalist Jake Marquis, bass guitarist AJ Khah, and drummer Luka Fischman. Jake and I connected this past summer via twitter and send each other music from time to time. I am excited to share our conversation about the band, their new album Overexposed, and their current run on the “Made In America” tour.

First of all, how excited are you guys to finally get Overexposed out to the masses?

As you guys were in the studio working on this album, what were you listening to for inspiration?

Jake: I think we really kept coming back to albums we thought were great beginning to end. Ocean Avenue by Yellowcard, Chase This Light by Jimmy Eat World, From Under The Cork Tree by Fall Out Boy. We wanted the ebb & flow of those records that tied the songs together. It was really important to us.

I saw you guys earlier this year with Grayscale, ROAM, and As it Is, and I know you toured with State Champs as well. How did you prepare for such a heavy touring schedule this year?

Jake: Honest answer? We didn’t. You can try to be as prepared as possible for tours but when it comes down to it you’re really just winging it & hoping everything goes smoothly. Not to say we don’t practice, take time figuring out new merch designs, or budgeting our trips….but every tour is different & sometimes all you can do is get in the van & do it.

Love that answer. I think you can overcomplicate things and sometimes don’t trust your instincts or realizing doors that are opened. Speaking of doors opening, what has it been like working with Equal Vision over the last couple of years?

Jake: Equal Vision is a wonderful label. They’ve supported us completely with our vision. Musically, with music videos, even merch. Having them be so receptive to our opinions is awesome. They work really hard for their bands & we couldn’t be happier.

The new single, “Fireworks”, has been out for a couple of weeks. Can you tell us a little about the story behind the track? I know there’s a solid back story to this one.

Jake: “Fireworks” has the longest story out of all the songs. TJ wrote it with his old band Goodnight City Lights back in 2011. When TJ joined Sleep On It in 2013 he showed me the song and I always loved it. Fast forward to 2016 when we were discussing what to put on the record, Zech brought up re-recording Fireworks for ‘Overexposed’ we all agreed it’d be a good fit on the record & had a blast recording it. Derek [Discanio] really liked the song too & ended up doing the guest spot you hear on the album. It’s actually kind of hilarious people have been tagging us online thinking we stole the song…not making the TJ connection.

As far as the album as a whole, what should fans expect from the album and Sleep On It to start of 2018?

Jake: Well, with the record out now, we’re really looking forward to seeing how fans respond to it on the Waterparks “Made In America” tour. We’re really excited to hear fans opinions & how they connect to the songs.

Pretty cool that you guys are touring with label mates Waterparks. What are you most excited for about being on the road with them?

Jake: I’m stoked to actually get to know them. We’ve only really met in passing at stuff like the APMAS ect so it will be great to
hang with them.

Who would the members of Sleep On It “fan-girl” over?

Sleep On It are pioneering the future of pop punk and this is only the beginning. You can catch them on tour with Waterparks, As It Is, and Chapel this winter, while picking up the new album on all platforms. Follow them on Twitter ,Instagram, and listen to the new album on Spotify.