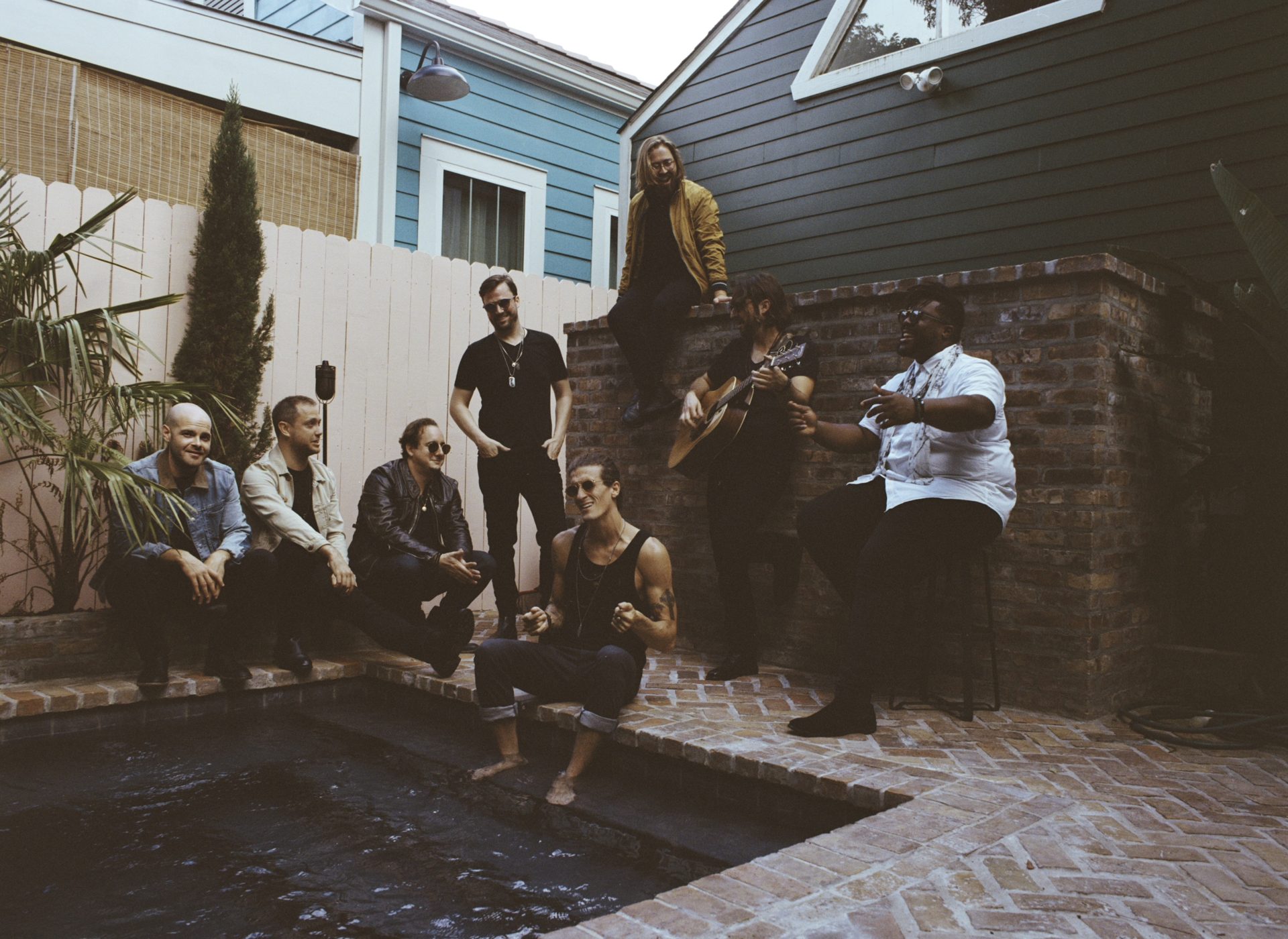 In the world of music, ten years can be a lifetime. Methods, themes, ideas, and trends may come and go, but time can also help fine tune artists’ vision and mission. The Revivalists journey is a prime example of staying the course and reaping the benefits of consistent hard work.

Following the life changing 2015 single “Wish I Knew You”, The Revivalists set out to embrace their new popularity by relentlessly touring and selling out tours. David Shaw [lead vocals, guitar], Zack Feinberg [guitar], Andrew Campanelli [drums], George Gekas [bass], Ed Williams [pedal steel guitar], Rob Ingraham [saxophone], Michael Giradot [keyboard, trumpet], and PJ Howard [drums, percussion] knew that their live show was unprecedented, and they took it to the masses. The band recently released the already popular Alt-Radio single “All My Friends” earlier this month in preparation for their fourth full-length album and first for Loma Vista Recordings. We talked with Zack Feinberg, guitarist, about the new single/album and this upcoming fall.

First of all thanks for talking with us, I’ve heard “All My Friends” on XM and it’s already getting great playlists placements. Can you tell us a little about the decision for this to be the lead single?

Zack: Our lead singer David Shaw wrote it with Dave Bassett and recorded it in New Orleans. With “All My Friends” we felt the pressure for this to be a big launch with radio and streaming services. Collectively we felt like it was the best representation of this album and where we are at after working on this new album.

You guys have been at this for a while. What’s it been like growing with the ever-changing music landscape?

Zack: We’ve been touring for a better part of the past decade. The growth has been incremental. We got to enjoy all aspects of touring, getting booking, and constantly building. We’ve built a strong live show following, it was just a matter of time before that translated to the radio and the masses. "Wish I Knew You" was the first big track for us in 2015. Our lives changed drastically and we knew we had to keep pushing forward so we hit the ground hard. It’s cool going back to places you've played and seeing it constantly grow. Now, it's just being grateful and pushing, it’s exciting.

I saw that the band spent some time here in Nashville for this album. Who did you work with?

Zack: We got to work with Dave Cobb at RCA Studio B for three weeks. He’s worked with Sturgill Simpson and Chris Stapleton, plus that studio is historic. It was a great experience.

Festivals have treated the band well the last couple of years. I actually saw you at Shaky Knees last year and the band is slated for some big ones this fall. What shows are you looking forward to?

Zack: We have been very fortunate with placements and show slots for sure. We’ve got big sets coming up at Music Midtown and Voodoo Fest. We also have our first headline show at Red Rocks Sept 13th and it’s sold out, so we’re super excited about that. You know we’re just getting to play these dream venues and times, it’s surreal.

What can you tell us about the upcoming album?

Zack: While not a whole lot, this was the first time we recorded and co-wrote with multiple producers and writers. Dave Cobb, who I previously mentioned, Andrew Dawson did the other half, and he’s worked with Kanye and FUN., and also Dave Bassett in New Orleans. With fourteen tracks, there is something for everyone on this offering.

I have to know what touring looks like for The Revivalists. With 8 members, logistically how does it work?

Zack: Yeah were touring with 8, we just added another percussionist. Often a tour bus honestly, or fly to a location and rent equipment. Also most will travel with specific gear.

Being a band for the last decade you’ve seen the scene change. What acts/bands are you most excited about coming up?

Zack: Tank and the Bangos (New Orleans), they won the Tiny Desk contest in 2017. Seratones, Con Brio have a great live show, Greyhounds out of Austin, and Meg Myers.

What’s the big take away our readers should know for The Revivalists?

Zack: The big take away is the live show. We’ve got horns, pedal steel, a great lead singer, and the new songs from the new album.