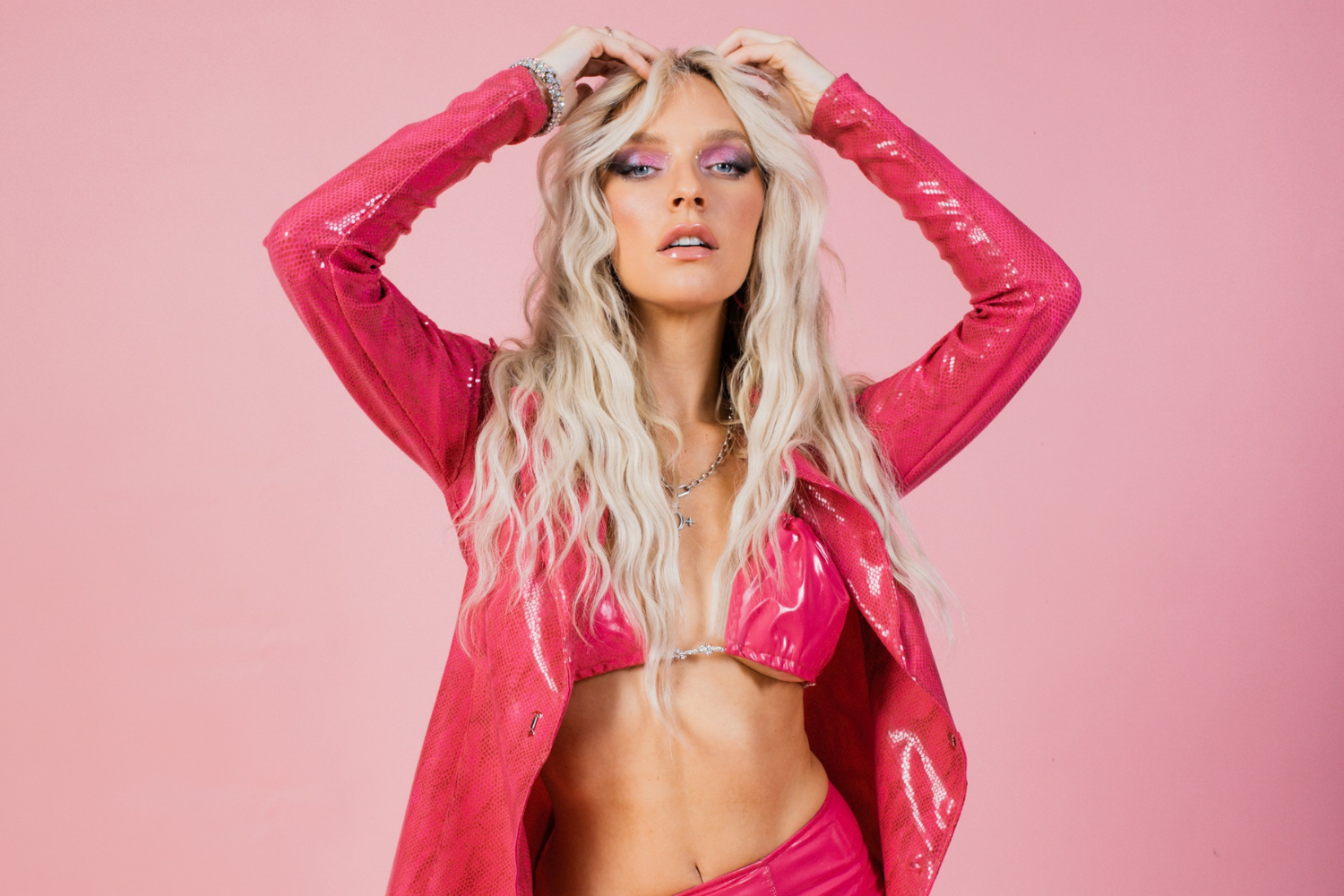 Zolita's song "Somebody I Fucked Once" was all over my fyp when it came out and for good reason. It's anthemic and earwormy and the matching visuals bring to mind 2000's teen movies in the best way. We talked to her about her stunning visuals, her favorite Lady Gaga video, and dealing with imposter syndrome.

Zolita: I grew up playing bluegrass guitar, which is very different than what I do now. My dad randomly is really into bluegrass. And he's a German banjo player, but he got me into bluegrass. And that was kind of my entrance into music. And then, when I was a teenager, I moved away a little bit from that. I wanted to play Hannah Montana, like write pop music. And so, at that point, I was just writing music for myself, but it wasn't really something that I foresaw being my actual career. I went to NYU to study film; film and photography were the main things that I loved and was interested in. And while I was at NYU, I realized that music videos were my favorite thing because they combined all of the different artistic mediums that I love so much. And there was nobody that I wanted to make music videos for. So I was like, "Well, why don't I just do all of it?" Because I'm writing original music for myself anyway. So, I might as well just make it a whole concept project.

And did that film background translate into making this trilogy of music videos?

Zolita: I think studying at NYU was funny. Part of the reason I love music videos was that I was so anti-narrative. And I was like, "Oh, I want to be as experimental as I want. And I don't want it to have to make sense." And you can do that in music videos. So that's why I want to do music videos. And then it's funny that the work now that I'm making is so narrative and episodic and story-driven. So I think, yeah. At my core, I'm a storyteller. And I think this trilogy is shaped by just who I am as a director and a storyteller.

Can you tell me about that initial concept of why you wanted to make it into a trilogy?

Zolita: I think I've always been super inspired by just visual concept albums. Lemonade was a huge moment for me, inspirationally. I love seeing Lady Gaga do stuff like that when artists can carry across a concept across several videos or several songs. So when I did "Somebody I Fucked Once," that was its own little thing, a little movie. It wasn't originally intended to be a trilogy, but seeing the reaction that people had to that story and how in love people became with our love story and with the characters made me want to continue it. I was like, "Why not? There are not a lot of women loving women content with realistic, happy endings. So why not give the people what they want?

I feel like being a musician now is such a visual thing. How do you kind of feel about that?

Zolita: I feel really excited about it because I've always been a filmmaker and visual artist, first and foremost. So, I love TikTok because it's essentially just visuals and reappropriating. I love being able to reappropriate my visuals and music videos that already exist that maybe a younger queer generation hadn't seen or wasn't exposed to. And now they can discover me through just new edits that I'm doing. So yeah.

I saw that you blew up on TikTok. Do you love having kind of that way to connect personally to your fans?

Zolita: I think what's so fun is when I did this, "Somebody I Fucked Once" trend, getting to see fans do their videos that were-- that trend was about saying what your type was. And that was just so fun because I felt like I had little introductions to people who listened to my music. Also, just dueting things that people make and seeing what things people come up with. It's definitely a really special way to connect with fans.

What do you think has been kind of the biggest challenge for you in the music industry?

Zolita: I think it's been getting things to translate to the music side. I have always had a really strong grasp on the visuals and on the videos. I put so much time into them, and they've always done well on YouTube. I think my biggest challenge has been to take myself seriously as a music artist too, and I definitely can get imposter syndrome sometimes because I spend so much time on the other elements. You think of this idea of this musician who's cranking away in their basement all day long writing, and my project is so much more than just that. Now I have a full team around me, which is so awesome, but it took six years of grinding and doing things myself and hustling, and it finally took that big viral moment to have faith in the project.

How do you kind of deal with confronting imposter syndrome? I know that's something so many people struggle with all the time.

Zolita: I just try to remind myself I'm like, "I'm making music, and I'm putting it out, and people are listening to it." I am an artist just because your trajectory isn't the same as another artist's doesn't make you not an artist.

What artists have been inspiring you lately?

Zolita: Lady Gaga always. I say this all the time. She's my number one, just always going to be the most inspiring for me visually. And whenever I'm feeling in a rut or just feeling like I need to get inspired again for videos, I will just go watch her discography, and I'm just like, "Goddamn, what you can do in a music video." The ability to make a music video a cultural moment is just so cool, and it can reach so many people.

What is the one Gaga video you think everyone should watch?

Zolita: Oh, my God. I'm going to say, "Marry The Night." It's literally like an entire short film, if I can say another one, "Telephone." Those are my top two.

I remember Telephone coming out and going up to someone's apartment to watch it in college when it came out. We were like, "Oh, the video's out. Let's all go watch it."

Zolita: Yes! Her videos were these massive moments that everybody kind of came together on, and I feel like that doesn't happen with music videos as much as it used to, and I love that.

My last question would be, what would your best piece of advice to young women in music be?

Zolita: My best piece of advice would be to learn how to do a lot of things yourself before you try to find other people to do them. Learn how to manage yourself, be a hustler, and learn how to like Photoshop. There are so many tools at your disposal on YouTube. Learn how to edit, make your own content, don't be a perfectionist, and put stuff out and see what sticks and see what people gravitate towards. I think, especially in the beginning stages, you are in such a favorable position if you can design your own merch and make your own marketing materials and edit your own videos. Also, just social media in general, I think 90% of being a music artist in the pop space is social media. I think just try to find something. Even if it's like not your favorite thing, try to find your niche or something that you like about it and run with it.

Keep up with Zolita on Instagram, TikTok, and Spotify