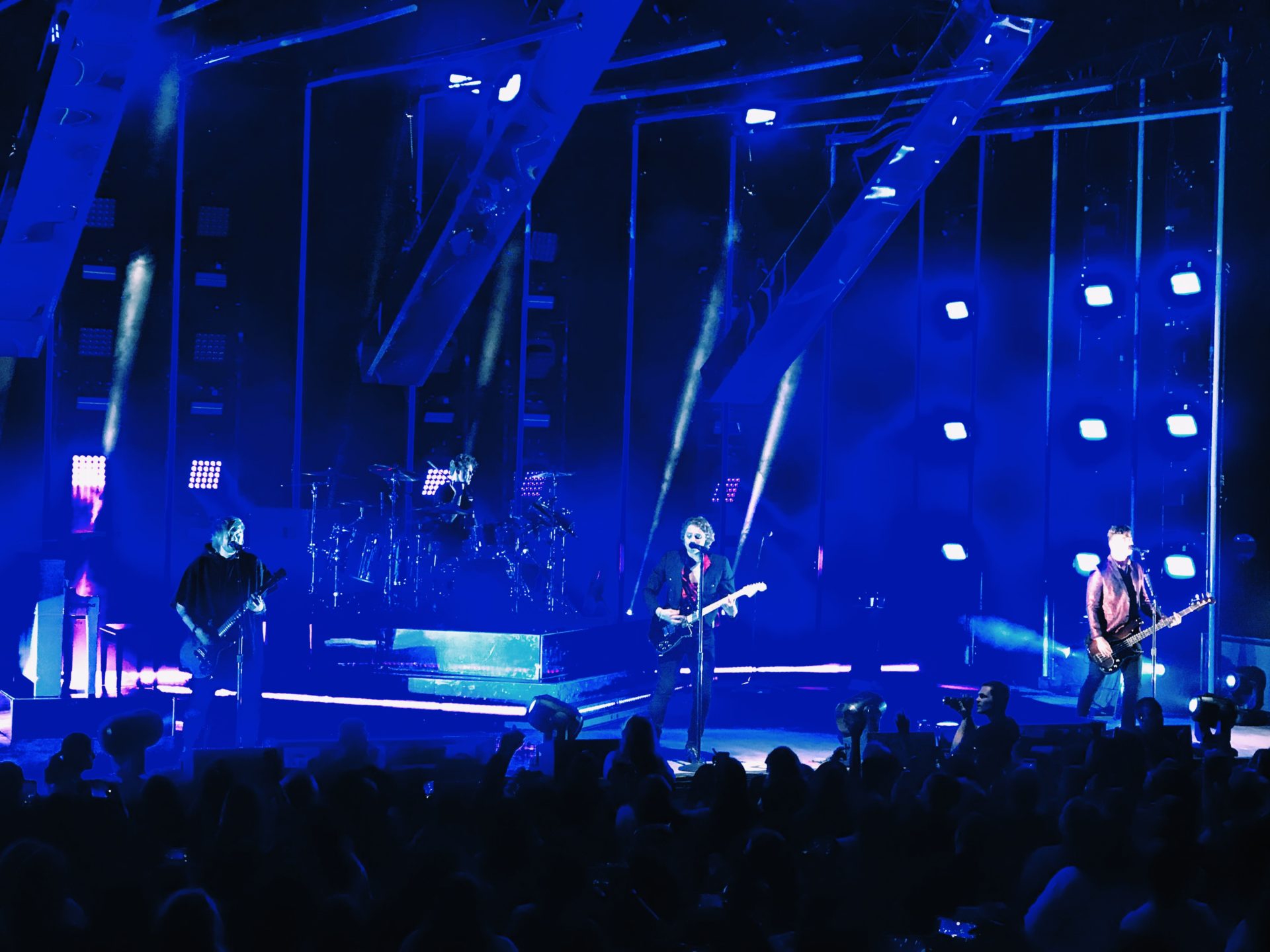 This fall, 5 Seconds of Summer has quite honestly taken the country by storm, both embarking on the U.S. leg of their Meet You There tour and hitting #1 just this week on the pop radio chart for the first time ever with their second single, Youngblood (a BOP, y’all).

With two 5SOS fans who have been around since the band’s beginning, we at The New Nine hit up not one but two shows this tour and boy were we in for a treat.

5 Seconds of Summer shows are truly made for outdoor venues, and I was thrilled when they announced this Dallas show would be at our new indoor/outdoor venue. The instruments really are one of the focal points of Youngblood, and I knew the sound and vibe would be amazing in that setting. I’d actually also attended the show earlier this year at the House of Blues in Dallas, so couldn’t wait to really know the words to the new music and see how the show had evolved since then.

The show opened with “Babylon,” an unexpected yet powerful kickoff. The stage and special effects, coupled with Calum’s vocals, let everyone there know we were in for a heck of a show. From that minute on, I’m not sure a single fan sat down. Especially not when two of my favorite songs, “Talk Fast” and “Moving Along,” quickly followed; I love a good upbeat concert and the beginning of this show did NOT disappoint.

As the show continued, through older hits and fan favorites like “Waste the Night” and “Amnesia” and most of the catalog of the new album (Better Man Stan right here), it was very apparent to me how impressive these four have become - their stage presence, the song lyrics, how much they have elevated their skills on various instruments. When Luke was on the piano during “Lie to Me,” it was such an insane moment in the arena because you could just FEEL the crowd was kind of in awe. If you tell me there is a feeling that is more powerful than a crowd of proud fans basically basking in the sound of their favorite band crushing a super emotional song, I’d call you a liar.

ANYway, the show! As it began to wind down with “Jet Black Heart” and “Want You Back,” the audience began to grasp for more. More time, more songs, more attention from the band for this night in Dallas specifically. It’s weird how you cannot wait for a show to come, but once it’s there, you almost wish it wasn’t yet because that means it’s over. However, the main show came to an end which was instantly followed by the crowd chanting for the band to return.

And, just as we knew they would, they reemerge and treat us all to “She Looks So Perfect” and the grand finale, “Youngblood.” The crowd goes WILD. When the night ends, fans are slower to leave than usual - for me, I’ve truly loved this album since it was released and I was legit bummed a show I’ve essentially looked forward to since we knew new music was coming was over. I immediately texted my sister, hopeful they’ll eventually announce another leg in the U.S. in 2019. And if they do, we’ve already decided it’s a show we cannot miss.

I am very biased when I talk about how fantastic performers they are, but their Meet You There tour seriously blew me out of the water. From the moment Ashton takes the stage and begins the drums and as Michael, Luke and Calum all join, the entire amphitheater was electrified. The boys opened with “Babylon” and that set the tone for the rest of the night. They followed up with my personal favorite, “Talk Fast” and that was all I needed to know I was about to not “Waste The Night” at this concert.

Michael donned an oversized hoodie, cropped cargos and sneakers, meanwhile Luke and Calum decided to color coordinate as Luke sported a red shirt and Calum a read and black blazer with a black shirt underneath. Ashton, of course, stands on his own with just a bowling jersey with red embroidery. Fashion aside, the music was everything I ever wanted from a tour.

Some evergreen fan favorites like “Amnesia” and “She Looks So Perfect” were also included on the setlist. Solo Michael was featured and the band joined him after the first verse for “The Only Reason” and every word came flashing back just like it did a few years ago.

Each member made a speech to the crowd and gushed about how much they loved performing back in California. I know I sound like a serious fangirl, but I am so proud of the boys and how far they’ve come. The two year break in between tours was exactly what they needed. Michael grinned practically from ear to ear as he performed each of his solos.

I can’t forget about Luke and Calum’s note changes. Like, did you even see 5SOS live if you didn’t experience this with your own ears? Ashton’s drum solos are a given, of course. With being #1 on the pop charts, you just knew the boys were enjoying and loving every bit of momentum this album brought with them.

I think Kasey and I knew from the moment we heard Youngblood in its entirety, it’d be a different time for our boys. Over the last four years, we’ve watched them mature both in life and in music. Even looking at my show’s crowd, you could tell they gained such a huge and new following. We are so proud of them and we would also like to take this moment to thank Andy DeLuca for designing our cities’ tour posters. They’re perfect and almost personalized to us and our interests.

I could go on and on about the show and the band’s performance for days, but it won’t do anything justice. They’re finishing up the tour in the states, now, but if there’s still a chance to see them, I highly recommend it. I have never seen this group so happy to be performing and doing what they love in a while.