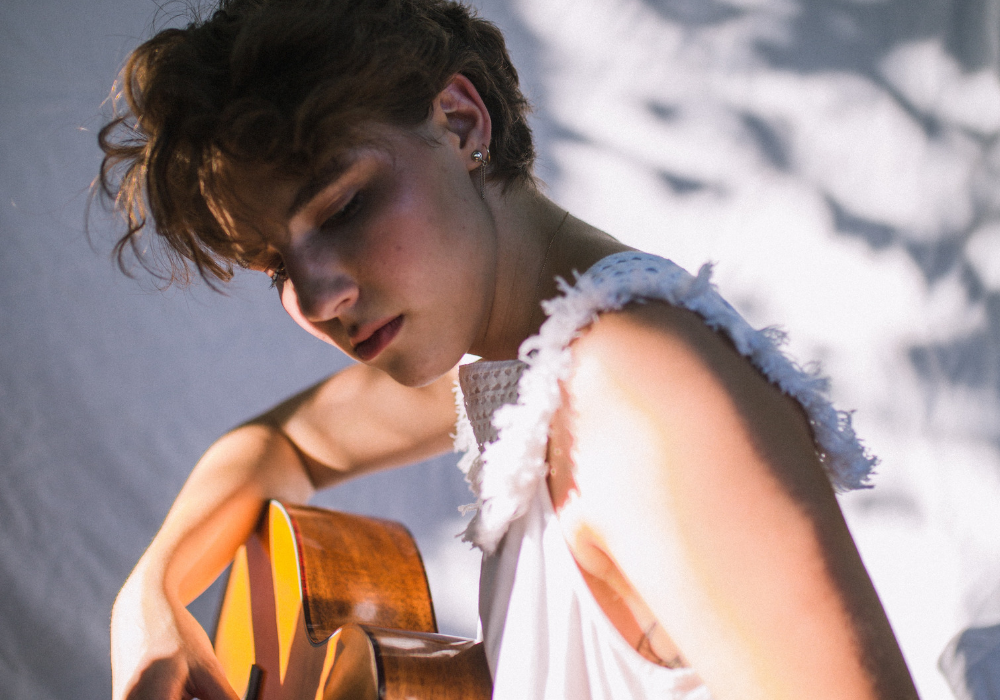 Corinne Bates is a dream. The Timothee Chalamet lookalike has a voice that will surprise you and lyrics that sound like they were taken directly from her diary, partly because they were. With her debut EP release, she's putting it all out there and she's never been more vulnerable but that's also where she finds her strength. We talked to our favorite new sad queen about her stunning debut.

What was your first memory of knowing you wanted to be in music?

Corinne: I wrote my first real song when I was nine. It was one of the most ego songs I’ve ever written. I was 9-years-old watching West Wing with my parents writing a song that goes like, “I need to ask you why do people cry?” and it was me asking god. I sang it and my dad played it at my fourth grade talent show and that’s when I realized I like that feeling.

Would you say you were a sad child?

Corinne: My mom always said I was a sad kid. I was always introspective, I had friends when I was younger but I never felt like I fit in with anyone. I really liked spending time with myself. When you spend more time alone it gives you more time to sit and write and think. In high school I got so sick. I didn’t have friends and I didn’t even play anything. It was harder for me to write about the hard times when they were that bad because they were too real. I got diagnosed with POTS when I was twelve and from 14 to 18 my best friend was my mom. I didn’t even want to make art because I was too depressed. I started to live my life again and started to feel comfortable expressing myself.

What made you want to release the project now?

Corinne: I actually went off anti-depressants that I’ve been on since I was twelve. It was making me more tired. I had a very emotionally tumultuous spring. By the time summer came around I wanted to force myself to play every day. It opened up this part of my brain where I started writing. I wanted to make music a priority again. I’ve never forced myself to do music. It’s so precious to me. I want it to always feel like a relief and not a burden. These songs feel like me. I’m not trying to be anyone else.

So, a lot of these songs are about a boy, what happened in that relationship?

Corinne: I’ve never been with someone who made me feel so comfortable and heard. This one guy always listened to me and treated me like a person. I felt like an equal. I felt like I could talk to this person. He’s a musician and he never talked down to me. I let myself feel for him more than I’ve felt for a lot of people because I shut myself off a lot. I’ve never gone out of my way to go see a boy, that’s not a me thing to do. My song “Brooklyn” is about flying to New York because I finally had someone to see there. He was my excuse. This time, I got there and I felt like I was talking to a brick wall. He didn’t talk to me. I went home and everything changed and it hasn’t been the same since. I thought that maybe if I write about it, it won’t hurt so much. I thought it would leave my body and stay in these songs. The first lines are verbatim from a text message he sent me after the trip.

Corinne: I probably never will have closure. Not everything has a definitive end. So I gave myself one. One of the songs I sent to the guy that it was about. “Coffee Stains” I wrote about this one guy. We were trying to be friends. It was a couple of days after his birthday and we went out to get drinks. His girlfriend was mad he was hanging out with me. He did molly and I had to babysit him. After that I was like, "We can never talk again." I had to drive him home and he apologized to me and I’m sure he was blackout drunk. Instead of responding to his “I’m sorry” text I just sent him the song.

Are you nervous about letting all this out into the world?

Corinne: I have bad anxiety and I wake up and have a mini panic attack most mornings. I’m excited but I’m super nervous because I’m a perfectionist. I went to my friend Holley and her boyfriend Charlie to help with recording, they’re in a band called Cat Jaguar, and Charlie did an amazing job. I recorded it live in their apartment. It’s super simple and I think that scares me a lot because what you’re hearing is just my songs. Just guitar and my voice. If people don’t like it then they just don’t like my songs. I’m better at dealing with that idea now.

Corinne: Trust that you know yourself the best. If something is making you uncomfortable figure out why. I would brush things under the rug because I didn’t want to confront them, it’s difficult to confront things but you need to do it.