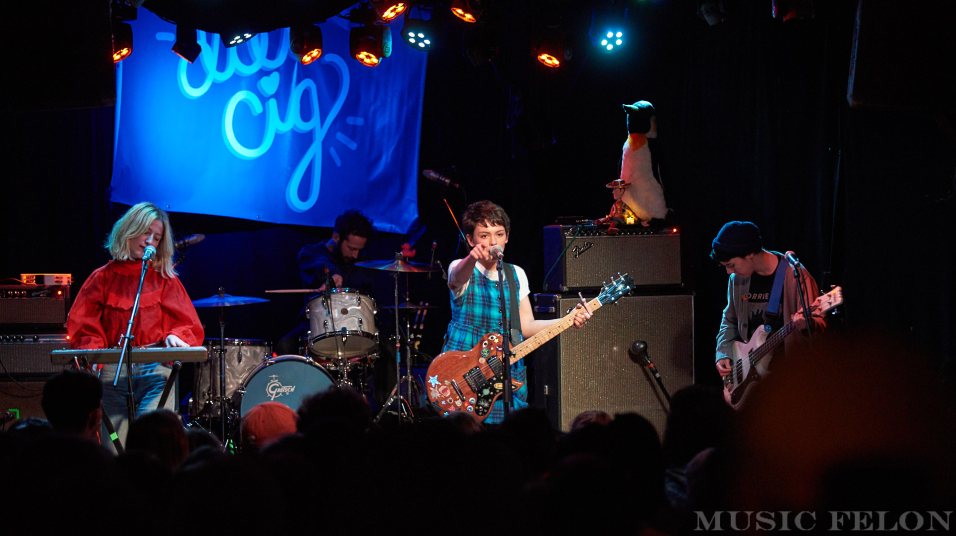 Diet Cig played the outdoor stage at Sidewinder on one of the coldest nights of the year but the tiny venue was packed with people nevertheless. If you haven’t been following the pop-punk two piece with Alex Luciano on guitar and vocals and Noah Bowman on the drums, they’re now a four-piece and they deliver one of the funnest live-shows you’ll see.

They started off with “Sixteen” a song that totally embodies the angsty vibe of the band, but the underlying vibrant energy carries the band. Alex is a killer front woman, her voice just cuts through you as the fade into the rambunctious  “Bite Back” their energy just increases with each show.

They go into “Scene Sick” and “Pool Boys” of their 2015 album Over Easy and the calmer songs make a nice break from the somehow joyful rage of their latest album Swear I’m Good At This, they comb through more songs. Alex is wearing leggings and a dress and she stops and yells “I’m freezing my ass off” but it doesn’t matter because her high kicks and jumps are worth it.

The crowd was beyond excited for “Link In Bio” the cheeky, standout single that pack a serious punch. Alex’s sugary voice clashes over the intense music making for the perfect mix of anger and kindness.

At one point Alex looks at the audience and makes us chant with her, “I will not make myself smaller for anyone else” and coming from a tiny girl that I'm sure has had her fair share of doubt, there’s nothing more empowering.

They play their song “Harvard” which starts with Alex singing “How’s you new Ive League girlfriend. Is she boring too in the way I couldn’t stand?” Its beyond perfect. Alex is the girl you want to be, she’s loud, she’s angry but still so positive and unstoppable. They close out the show with a cover of “Closing Time” which brings the night to an end.