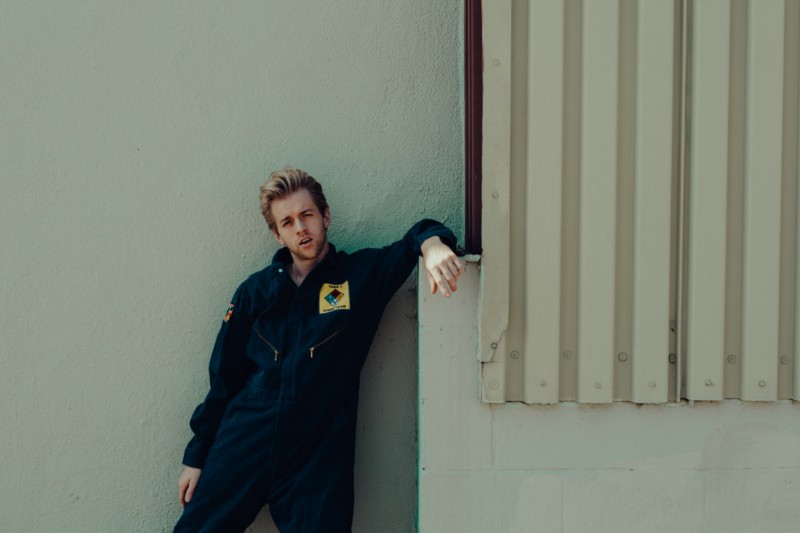 Elijah Noll is fresh off the release of his gorgeous video for “Poison” and he’s about to head out on tour. We chatted with him about what has been inspiring him lately.

Elijah grew up playing classical violin, he quickly transitioned into guitars and songwriting by his early teens. When it came down to the age old question of “What am I going to do for the rest of my life?” He knew that creativity was paramount.

“I was writing a lot of music that was pretty mediocre at the time but I knew I had to stick with it,” he jokes, “I knew I had been doing music for so long an I loved writing but I didn’t think of it as a professional thing.”

His song “Poison” is a blend of his hypnotic melodies and vulnerable voice. All around the song is alt-pop at its finest.

He explains, “In the time I wrote it,  it was  kind of an escape through partying and hooking up and trying to find love in short bursts. That kind of encapsulates the theme of the song and where it came from.”

Elijah wrote the song a while ago but it took him sometime to bring it into fruition. He can be a perfectionist when it comes to his songs. He says, “I loved the song and I was a little overprotective of it. This past year I started working with my friend Kenny Carkeet and I really like working with him. I thought he would be a good fit and we worked on it together and this version came out.”

The video puts an emphasis on Elijah’s lyrics with trippy visuals representing the way our metaphorical poison takes over our lives.

He says, “I love visual art and I sometimes think I come up with cool concepts but at the end of the day I like working with artists who have their own vision. I think that’s the most exciting way of doing it for me.”

Elijah is learning to find that sweet spot when his songs are ready to be out in the world. He explains, “I think I had this idea like 'What if this is the best song I write?' Which isn’t true because you only get better. I wanted it to have the perfect timing and the perfect rollout. It was kind of an obsessive thing.”

Part of that comes from trusting his intuition and knowing when the song feels right and knowing that something may never be perfect. He’s still finding his process and figuring out his strengths as an artist.

He says, “It’s been an internal struggle. Sometimes I can get stuck in this loop where I don’t feel like I’m making anything good enough and I get distracted. I think now I’ve finally figured out, like with any creative pursuit, you have to keep pushing through the walls and the blocks. It’s always worth it.”

While Elijah has toured before as a guitar tech with DREAMERS, this is his first tour for himself opening for The Mowglis. He’s not nervous for performing but more concerned with logistics. As an up-and-comer he’s doing a lot of the planning himself, but that’s not something he’s a stranger to. Elijah is the kind of person that can figure things out on-the-fly.

He tells me, “I really feel totally prepared and ready. I have a bunch of new music I’m excited to try out on the road. I love playing new songs for a crowd of strangers because it’s the best way to get a read on what resonates with people.”

One thing that he emphasizes is that taking care of your mind when you’re in a creative field is just as important as your music. Making art can be a constant battle with your emotions. He emphasizes, “I meditate every day. It’s been a big life saver.” To stay motivated and to keep positive he focuses on the creative process.

He says, “For me it used to try to be about chasing a song but now I’ve learned that if I chase the excitement of the process of the writing a song, sit down every day and be excited about the process. That’s what gets me ready everyday, having the attitude to make a habit of creating.”

As for his best advice for any musician struggling, he says,“Don’t stop. It’s so cliche but If I could have heard words consistently said to me that would be it. The people that make it are the ones that never stop. You’ll have ups and downs because that’s how life goes but as long as you come back to it and take care of yourself.”