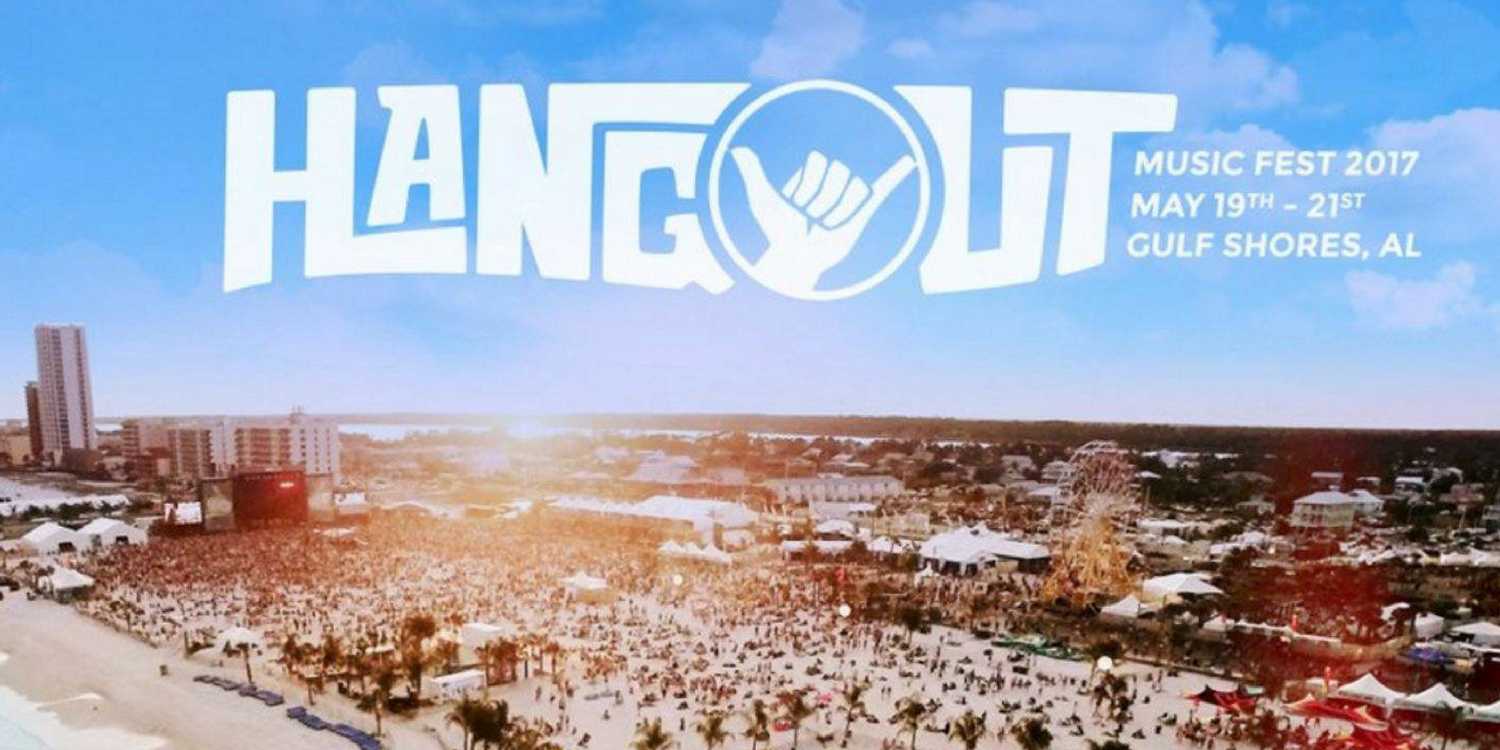 I snagged BJ in Houston and we journeyed to Alabama. It’s about an 8 hour drive, so we stocked up on Lacroix and cheetos and listened to the playlist of the entire lineup and also the audiobook of Modern Romance, because we have some personal romantic issues that only Aziz Ansari can sort out for us. We got into Gulf Shores around 11 p.m.

Friday was HOT guys. We got to the gates early and waited in line. Our first act of the day was The Suffers, we got some early pina coladas. The Suffers killed it as usual. Next up was Joseph, the amazing sister trio from Portland, Oregon with those striking blood harmonies that we cannot get enough of. Joseph was amazing live and they just seem like the sweetest people in the world. They stopped and reminded everyone to drink water and put on sunscreen. So cute. We went to go catch up with Foreign Air and COIN before their sets and the guys were super fun as usual. Now Charlie XCX was going on. We danced to “I Don’t Care” as a massive amount of inflatable donuts cascaded over the crowd. We watched people run in and steal them. I got taken down by one or two, those things are heavier than you think. We headed to Fitz’s Stage to catch Bishop Briggs. Everyone was so excited to see her. She just always delivers live.

Next up, COIN was at the Mermaid Stage and a massive foam party was happening. Honestly, this stage was so packed. The guys are so much fun to watch and you can just tell they really love performing. Barns Courtney was coming on soon so we jetted over to the BMI stage. Barns is a total babe and he really has this spark when he performs, it’s rare for someone who is performing on the smaller stage but he still manages to come off as a total rock star. He took most of his clothes off at the end of the set which was a welcome addition. We stopped for a GIANT slice of pizza. We were feeling pretty lazy so we didn’t get too far in the front for Phoenix but the lights they have look great. They have this big rainbow that says PHOENIX and it just looks wonderful, the perfect ending. So we got home and now is the moment of truth…yup there’s a sunburn, but it is slight. Left unchecked this will be terrible, and it iis right at the top of my v stylish bardot top, it perfectly mirrors it. Wonderful.

Takeaways: Too many bros, so much nudity, how are people this drunk when it’s $15 for one pina colada.


“Bj, today I’m going to cry when we see LP,” I say very causally to my brother and BJ, and they accept this about me. Today BJ is opting for whatever clothes do not make her sweat, and I opt for a tank that says V RARE in big gold letters. For some reason people enjoy this and like to take photos of my shirt. I down two 5 Hour Energies and my brother says, “That’s not how they work” and I refuse to listen. Today we had an early interview with The Suffers and Kam dropped us some great tips: Put deodorant on your feet and areas where you blister or chafe (my thunder thighs), and also matte lipstick is the secret to success in the heat. Genius.

We’re upset that we missed FLETCHER, but then like magic I see LP walk past us and violently grab BJ’s arm. Bj who is not as familiar with LP, says, “No that’s a man,” silly BJ, that’s an angel. We couldn’t score an interview with LP but man, did I try. We cruise over to see ARIZONA. This was their first festival and they were so dreamy. I heard people in the audience saying they were here specifically for them. Hearing them play “Electric Touch” live was a dream come true for me. We chatted with FLETCHER and Barns Courtney and Cobi. All very beautiful people with interviews to come out soon. Then I gave BJ a very serious look because I needed to be front row for LP, I made her sprint across the grounds.

We caught the end of Tkay’s set and she was SO CUTE, omg girl can dance. We took some selfies with her. Then the crowd cleared out. Here we were front and center. Now we had to wait two hours. Sorry if my obsessive behavior affects my ability to report correctly. I noticed my sunburn getting visibly worse and tried to sadly apply sunscreen on it fully aware that it would do nothing. I lost it when LP came on. She was singing “No Witness” and even though accounts of this interaction vary, I swear to you LP looked at me and put her hand out and I grabbed it and it was beautiful. I wonder if my chances of interviewing LP are going down with each sentence I write about her? Maybe. She sang “Lost On You” to a crowd in love and probably in tears and we all sang it back to her. One thing I appreciated was she would walk over to the sides of the stage for the viewers that couldn’t see her as well, she came out after her set to take photos with us. She’s amazing, we know.

So then we ran to Cobi! Cobi…is fine as hell, and he SLAYS on guitar seriously, but we cut his set in half to go get emotional at Band Of Horses, a cleansing rain came down during “The Funeral”, like a damn sign from god. We took cover. We came out for Twenty-One Pilots but the skies did not look promising. There was a lot of lightning in the distance and we knew we wouldn’t make it through. There was an older gentleman who couldn’t stand up straight and almost knocked a girl over he was so drunk. Although they performed a good amount, and damn can they perform, we were just kind of waiting for the inevitable. ANNND yes, they cut their music during Car Radio and people were disappointed but the onslaught of rain that happened after was insane.

We were lured into a Dippin Dots for obvious reasons (banana split dippin dots). The girls at the counter were so sweet, and then yup, massive amounts of rain started pouring down. People were coming into the shop just for protection (which angers me, like buy some dippin dots gang). We had to meet my brother at the Rite Aid a good half an hour walk, because he had shuttle passes and we did not. I looked at BJ and apologized in advance because we had about 30 minutes of walking in intense rain and I was not going to wait it out because it was going to happen anyway. We approached the flaring light of the Burger King and my brother texted me saying he would be very late because the shuttle lines were so long. We were soaking wet. I bought two coffees and we sat under the awning waiting for my brother.

Takeaways: Emily is questioning her sexuality, again how are people getting drunk, everyone here must be millionaires. My waterproof mascara is legit, did not budge despite torrential storms, the Burger King in Gulf Shores has the sweetest employees.

It was raining before we even left the condo. It was also COLD and I did not like it. We stopped at Walgreens to buy some form of cheap outerwear and settles on weird knit blanket pullovers. Feeling not so stylish, but super warm and cozy. It was pretty rainy even when Shaggy came out, but that did not deter the crowd from gathering for Di Real Shaggy. We were very hungry so we got some tasty noodles then we heard it… WE HEARD HIM SINGING ANGEL AND RAN BACK. He told us if the men ever got caught cheating we needed to learn from the real true player Bill Clinton and say, “I did not have sexual relations with that woman,” he also did a pretty spot on Clinton impression. You all know where this is going. He performed “It Wasn’t Me,” and I checked that off my life goals.

We headed over to Grace Mitchell, who I’ve been lowkey obsessed with. She yelled at people walking past her and asked someone if they were pregnant (they were not), so she’s basically the coolest person. “Who was your favorite person you saw this year?” she asked the crowd…”Trick questions it’s me,” she replied. I danced really hard to “Now” and screamed the lyrics even if I had lost my voice at this point. This is one of my favorite songs this year. We got to hang with her after and she was pretty much as cool as you’d expect but taller.

We walked around and caught Franz Ferdinand, they did wonderfully, but there was something on my mind. Earlier one of our writers alerted me that Wells Adams from the Bachelor franchise was at the festival. Wells was my favorite contestant and I’m pretty sure we’re soulmates, so BJ, being a good friend told me we would low key look around for him since our interviews were done for the day. EASY, so easy to find ONE person in a crowd of this size. We headed back over to watch Young The Giant, half giving up. They started singing “Cough Syrup” so I was in a good mood. Such a good song. Some guy walked past me and again, I violently grabbed BJ, “That’s him!” and immediately I told myself to act cool. The festival gods had blessed us. I got scared and couldn’t say anything. So we went to get a drink and he stood in line behind us! Okay, BJ had to psych me up for a while but I asked him for a photo, and yes, he was super sweet and nice and funny and we looked really cute together.

However, we had to run to catch Chance The Rapper, now the entire festival seemed to be out for Chance, like why wasn’t he headlining? We couldn’t really see anything so we stayed for half the set and walked over to see rock babes Warpaint. They were so spacey and dreamy and amazing. Always a favorite. We watched half of Mumford because honestly, me and BJ are not super fans. We felt like we’d seen the best of the best. We walked home to Sweet Home Alabama and fireworks blaring over the grounds.

Takeaways: Despite the bro infestation the setting of this festival still makes it one of my favorites. I love the road trip. I loved the lineup, and you just can’t beat feet in the sand while watching your favorite bands. I was so happy one of my oldest and best friends would go with me it made all the difference in the world than my usual lonely festing. I’ve discovered new artists. Now, it’s hard for me to listen to my playlist on the way back because it’s just too soon. I’ll have to recover from my post festival funk before I get back into it.