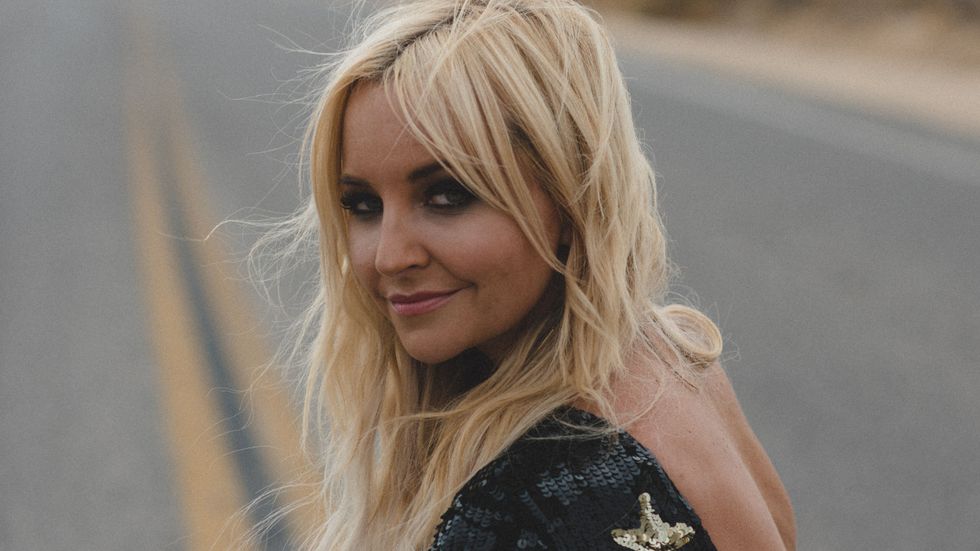 Heather Morgan had a pretty traditional start, she grew up playing open mic nights and had a band in college, but her impressive songwriting catalog really gives her an edge. She’s worked for all the big shots in country music but now she’s breaking out on her own. She has a ton of passion and ambition and she made it clear that country needs to make more room for female artists. She spoke to us about her new album and why she'll always call Texas home.

Okay. So why don't we start with how you got started in music?

I started writing songs when I was so young I honestly don't remember ever not having some element of music around me or I was always singing. I have a little sister so I would always sing her to sleep and then when I got older and started getting interested in music I really wanted a guitar and that was around high school and started playing around Texas at these Oprys that they would have like the Garland Opry. It was just kind of this organic thing that happened. When I got to college I put a band together in Austin and we would travel on the weekends and so that was all through when I was in school and then afterward I was playing some shows with this guy named Radney Foster and he was, "You write songs all the time, you can get paid to do this." And I was, "What?" And he was, "You need to take a trip to Nashville and you need to go meet this guy there and you need to play him some of your songs." I remember he asked me, "How many songs have you written?" And I thought he expected me to say oh I've written 20 songs, and I think I said something like, "Oh I think I've done 475." And he said, "What?" So he was yeah, so you already do this job without even knowing it. And so I got a pub deal when I first moved to Nashville and started writing with a bunch of people and that turned into cuts on albums and kind of snowballed into this songwriting career so that's kind of a long answer for

When I'm writing for other people I'm definitely trying to figure out where they are in their recording process, like maybe what they need for an album or where they are in their life. For example I have a song on Dierks Bentley's new record that we wrote together with his producer Ross Copperman and it's called “Stranger to Myself”, and it was this idea that I had probably a year before we wrote together and I was singing it for Dierks when I got the idea for the song. I just wanted to have experience [inaudible]. I don't know where he is in his life but I know that he's got three kids, he's got this amazing marriage, he just seems to be doing just a lot of cool stuff like being out in the mountains or jumping in cold rivers, he does those ice baths in the morning.And so we wrote this one morning last year and I just talked about this idea. This kind of feels like it might be your story. And I just feel it's supposed to be your song. And so I kind of gave him the idea, kind of did it myself which chorus idea. He was like, "My wife cried when she heard it." It's kind of like looking out a windshield. I mean, like trying to get in their driver's seat and figure out where they're headed, where their heart is, and come up alongside them, and kind of like help them drive the car, if that makes any sense at all. And then from myself, it's like looking inward. When I wrote this project, I went out to Joshua Tree, and I had had my heart broken. And I hadn't really gotten to write about it because I was writing with so many other people at the time. And I didn’t want to miss out on writing with any artist or anything. So I was just putting my own music because it's sad. And then it just came to the point when I was like, "I just need to do this."

Can you tell me kind of your favorite part about being from Texas? I feel like people give us a lot of hate but I love Texas.

Me too. Oh, my goodness. It was just something about when we met grandparents that are from here, gin, it's so-- even today, when we got solar fields to the airport, it's just something like the air chose us then. It just feels like home to me, and-- I made this joke with somebody the other day. I was like, "I wish there was a day now for only Texans." Ziggy said something like, "Leave the state. Just find each other." I think it's just like tradition. I feel so lucky that I'm from here. And then especially in the music scene, it's just a rich music culture. I mean, I think of Stevie Ray Vaughan, Guy Clark, Beyonce, more of this Miranda. All the people that are from this state that are so talented. There are days when I'm just like, "I  want to live in Austin because the breakfast tacos.” I miss it so much, but one day, I will end up back here, I know. Anytime I meet some people that are from-- people from Texas, there's just this thing. That unsaid thing of like, "Oh, you're from there too." Yes. So I love that part.

And what would you say is kind of one of the biggest challenges you've faced in your music career?

Being a female in the industry right now is just kind of a challenging moment. I went to an awards show last night in Nashville for-- just that celebrated women and it was so special. I think I cried like 20 times and Karen Fairchild from Little Big Town said my name which is crazy. But basically, I'm surrounded by the most talented and capable, hardworking women and would count myself in that group and I just feel like there is a lack of opportunity. So I feel like the world at large-- music fans don't even know that they're missing out on such incredible music because there's just-- for whatever reason, it's not being heard because somewhere along the line there's a bump in the road and it's a big bump. I was sitting at a table with all these girls that have been nominated for Grammy's and one of them had just written that soundtrack for A Star is Born, incredibly talented and this other girl has a top ten with Maren (Morris) right now and I've got a couple songs out with Brett Eldredge and so we're sitting there at this table with really accomplished people and getting to watch all these women in this room. I had coffee with a friend from high school and she was saying her daughter will turn on-- she'll turn on regular radio and her daughter will say, "Play a girl song." She's like, "Well, it's the radio, babe. I can't really make that happen." We just need more opportunity and more people to step up to the plate. So hopefully something is going to come around and the winds are going to change and it won't be a part of the conversation because it will be fixed somehow.

I love that. I definitely think country music is seeing a lot of strong women right now. What would be your best piece of advice to a young girl who wants to get into music?

I think the coolest thing that I figured out after being in Nashville for a while was that as much as I was looking out at people that I admired was when I really got to spend time by myself and figure out what I wanted to say and what kind of my angle on the world was, that's when things started to shift for me. I feel like we all have a unique perspective on the world and if your gift is music then I feel like, whether you know it or not, you're going to have an angle in how you put words together and how you interpret emotion. And so I feel like I wish more young girls have a moment where they realize how they have that gift already within them versus looking at someone else. And even though I think aspiring to be something or being inspired by somebody else is amazing and important but I think people are way more equipped than they realize.