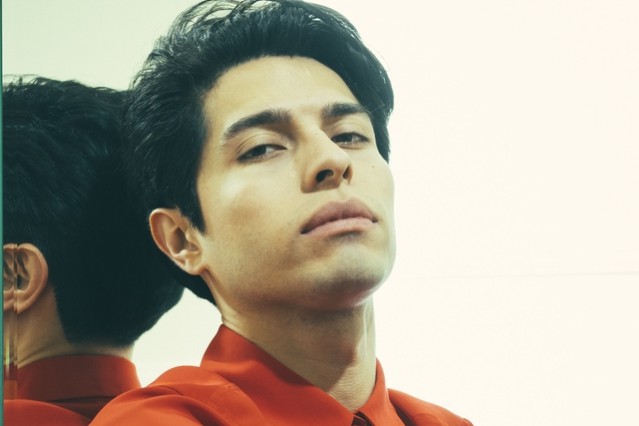 Ronnie Heart has been a sort of fascination of mine, I used to work in Dallas and I’d see him almost everywhere. After following him on Instagram I became fascinated by his eclectic style and incredible live performance.

When Ronnie was 17 he started to play guitar but it wasn’t until a year or two later when he really got into it. He moved around a lot and he became fascinated with the instrument. Aside from his musicianship the one thing that has always captivated me about Ronnie, is his performances. I can’t tell you how often people ask me about music in the Dallas-Fort Worth scene and I tell them ‘You need to look up Ronnie Heart, and by look up I mean, just go see him live, it’s the only way to do it’. He has so much charisma and puts on such a show.

Ronnie tells me this on-stage amazingness is just how all performances should be.

He explains, “It feels like it’s naturally important like it should be. I guess that’s because my favorite performances have always had a bigger production, it’s more theatrical. It leaves you with a bigger memory of the show itself. I’ve never gone to a show and thought man that guitar solo I’m going to remember it… even if it’s amazing I’m not going to remember it as much as something more elaborate and thought out. Music is just one part of it but I can listen to music when I go see a show I’d rather experience something with my eyes that I can’t otherwise.”

I can’t imagine how difficult it is, to do what he does. It takes a lot, for a local act to go on stage and perform like you’re Prince. However, I’ve never been to one of his shows that wasn’t jam packed. I feel like that’s one of the things I notice is lacking in live shows. Performance.

Ronnie says it’s something that just comes natural to him. He says, “I’ve always loved dancing and being around all music like that. That’s what I felt was lacking from any performance I’d go to that high energy and moving around a bunch. Or music videos or live videos I’ve seen. All my favorites like Michael Jackson and Prince.”

If he’s not performing you can find him DJing or making art or any matter of random activities. Please, really, follow him on Instagram because it’s easily one of my favorite accounts. He has this certain aesthetic. He says he just needs to create things.

He adds, “I’ve always been a person who’s really into media and entertainment but also the creative part of it is, not lie, i want to do this to, i just felt natural to want to basically throw clay at something there’s something natural about just creating…for the sensation of just wanting to do something. I would fidget if I wasn’t trying to draw or read or write or sing or dance.”

Ronnie does make a point to tell em the difference between the Dallas scene and the Fort Worth scene, people often group them together but they’re completely different. Ronnie has found his home closer to Fort Worth than Dallas.

DFW has a booming music scene right now, but Ronnie tells me there is a difference in the two cities. He originally started in Dallas because of their hip hop and electronic scene but realized he could easily do the same thing in Fort Worth. He adds, “Both cities are very proud of what they do, they work hard.”

He says, “Dallas has more hip hop and electronic, even neo soul. That was a big reason I moved. I wanted to be more integrated with that crowd because that’s what I do. I make funk, soul, R&B electronic. I mainly moved back because I realized I could do the same thing in Fort Worth. Both cities are very proud of what they do they work hard.”

Please catch him live if you can, I swear to you, one of my favorite live acts.