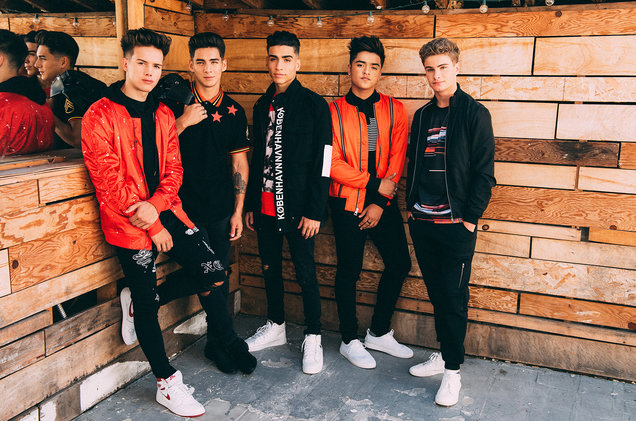 If you’re like me and watched Boy Band on ABC last year, you are likely familiar with In Real Life. And if not, you may have heard of some of its members – beginning on the show, Brady Tutton, Chance Perez, Drew Ramos, Sergio Calderon and Michael Conor have all grown impressive followings on their own, too. All beginning as individual vocalists on the show, they were the final five and ultimately, after competing against each other on the show, formed what we now know as In Real Life.

Interestingly, when talking with the guys this week, they weren’t all necessarily pursuing being solo musicians prior to the show. Chance, even, was going to be a firefighter, and Brady was involved in musical theater and acting, so to say the show changed their lives is certainly an understatement.

Since becoming an official group, it’s been impressive to see In Real Life come into their own and use their different interests and backgrounds to direct and inspire their music. It’s this diversity, they say, that makes them stand out as a music group. Sergio tells us he grew up listening to Latin and pop music, while Michael, who also plays the violin, is super interested in rap; these elements really come through in their songs, incorporating both rap verses and Spanish verses into their songs to resonate with their diverse fan base.

Their first single, Eyes Closed, was debuted at the live finale show and then just a few days later they visited Radio Disney, where they heard it on the radio for the first time.

“After about four days of being a band, we walked in to Radio Disney and did an interview and they played our song for the first time, and we were all freaking out,” Drew said. “It was a really fun experience because we had never heard our song on the radio. For only a couple of days of being a band, for that to happen, it was just a really cool feeling.”

Since then, they’ve come out with a number of songs, with their current single Tattoo (How Bout You) on radio stations across the U.S. AND in the Top 40 for pop radio as of this week! In the first week alone, it was added to playlists at 40 major stations and was the #3 most added song in pop radio behind Taylor Swift and Meghan Trainor – talk about a huge Top 2 to fall in line with. Especially for a band who is inspired by other pop artists like Bruno Mars, Charlie Puth and Justin Timberlake, they’re tracking to be a force to be reckoned with. And are as nice and grateful as they come.

In being so grateful, they are super aware of their fans, their support and how that has given them so many amazing opportunities.

“Thank you guys for the support and for requesting Tattoo,” Michael [and Sergio] said. “It means a lot to us, and the stuff you did really made a difference in seeing it go up the charts. We hope to see you at our shows this summer!”

And, because they love the fans so much, they even let us know we can be expecting a lyric video SOON for their next single, How Badly, out TODAY and it includes a little surprise for the fans! A new IRL video shot in NYC is something I can definitely get behind.

“How Badly is really, really special for us because I feel like that song is a great representation of us as a group,” Brady said. “We have some Spanish in there, we have Mike rapping and it has a cool reggae vibe; when we listened to that, we think that’s something we would listen to even if it wasn’t our song.”

This song is a BOP and you can listen to it today (on repeat, like me) here.

Finally, something I was most curious about with IRL was what we can expect next – they have been so busy, so what’s to come?

“In the summer we’re going to be doing a lot of festivals with some pretty big names, like 5 Seconds of Summer, Dua Lipa, Chainsmokers, so we’re really excited,” Michael said. “With it just being a year of being a band, it’s definitely a blessing to be put on stage with these people, and we’re looking forward to that for sure.”

With such a busy summer of festivals, it’s inevitable that In Real Life will get in front of such a huge new audience and only continue to grow their followers and fandom, so definitely someone you’ll want to start listening to now to lead the way. And, they’re already working on new music and focusing on truly making it their own, so we at The New Nine are excited to see what’s to come.

Listen to How Badly here and Tattoo here, and keep an eye out for them at shows near you this summer.