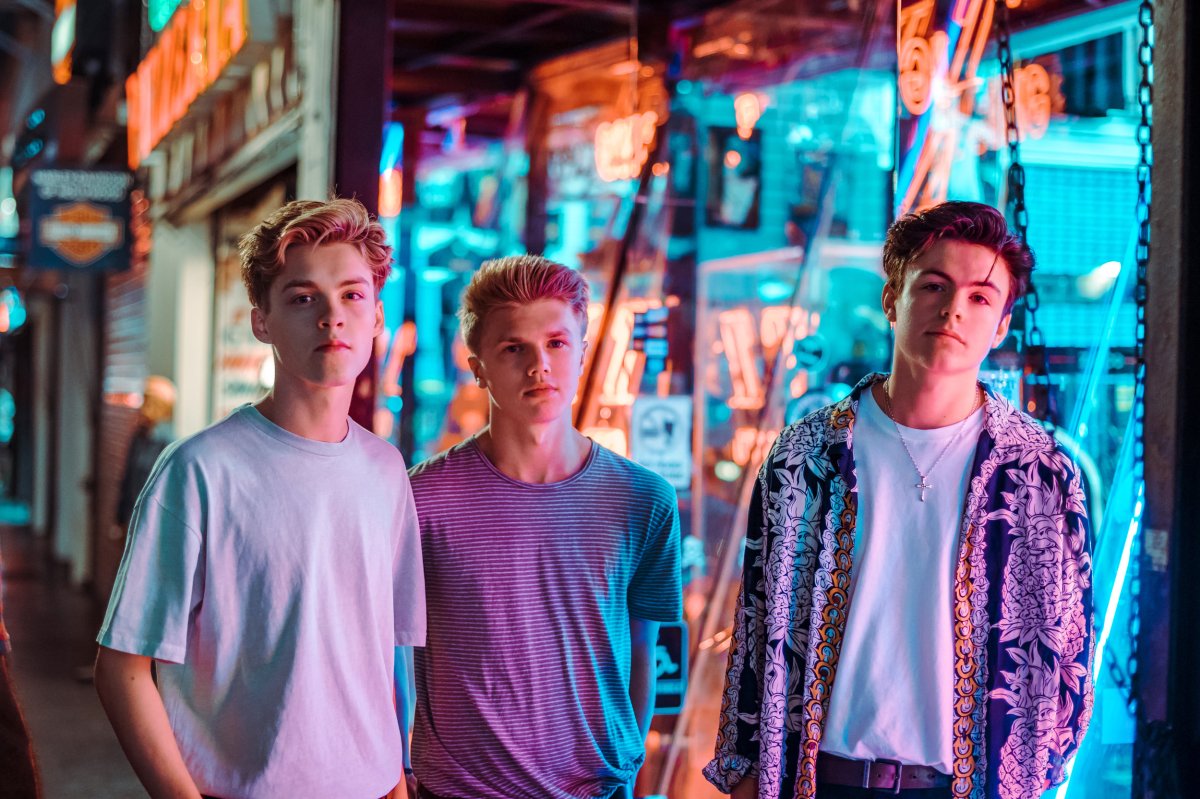 New Hope Club has been working hard. They just released "Crazy" and we've been obsessing over the 70s themed music video. They have the approval of Sabrina Carpenter and The Vamps and are currently on their headlining tour making their way across the country. We chatted with them about new music and what they have to say to their fans.

You just released Crazy this week AND the music video - congratulations! I know you mentioned the song is about staying in a relationship even if it isn’t the best thing at the time. Can you tell us a little more about how the song came together?

NHC: The song came together in June last year while we were in LA, just before we were about to head  out on tour with Sabrina Carpenter. The whole vibe of the song was really cool and something quite new for us as there is a slightly bluesy guitar riff that run pretty much throughout of the whole song. We thought that this would be a cool thing to try and we love performing the song live!

What was the inspiration behind the music video?

NHC: We have always wanted to do a sort of old school looking music video and the song Crazy seemed to work pretty well with that idea. The fashion was so cool back in like the 70’s and that is the sort of vibe we went for, unfortunately none of us can drive otherwise we may have been able to put a little scene of us driving along the beach in. There were some parts in the video where Blake is using a really old film camera and they actually made the final edit! The music video was filmed in LA on Venice beach and we actually got a permit to film along the whole of Venice, which is very rare to get! The director, Ed Rigg would actually directed our first video ‘Fixed’ also directed this one! It was good to be back working with him again.

So, back to the beginning for a second. How did you go about finding/bringing Reece into the band? Were you looking to grow the band further or had you always known three would be the right number?

NHC: Well for a while me and Blake we just at each other’s houses jamming out, writing songs and just getting to know each other better. We got to a point where we thought the next natural progression was to find another member. We saw Reece & then invited him down to George’s house for a weekend. It was really important for us to get to know each other before anything else. The weekend was great and we all got on really well, we wrote a song, played some video games. Just letting you know the song may have been the worst song ever… After a while being with Reece we felt that it was it, we didn’t need another member. Looking back on it now it would be really weird if there was another person in the band.

Your first cover as a band was for a song by The Vamps and now you’ve toured the world with them! That’s crazy. What is it like to think back on how you started and where you are now?

NHC: Yeah it’s mental, our first ever show was to 16 thousand people at and steam in Birmingham, England. This was on a vamps tour back in 2016! I remember we were so nervous that whole day. We sat in silence in a pitch black room for hour because we was so scared for the show later that day. We have done so many tours with the vamps boys we are really grateful to be able to go around the world supporting them.

After making your U.S. debut last summer with Sabrina Carpenter, are y’all excited to be coming back on another big tour here?

NHC: Last summer was our first ever tour in the US and honestly it’s was incredible. You never realize how big America is until you travel on a bus, we was doing 14 hour drives overnight and waking up in a different state. It has to be one of my favorite tours! We love the states and are so happy that we are back playing shows.

How do you prepare for live shows and especially tours? What can we expect to see?

NHC: Before stage every night we have a little ritual, we get in a huddle start chanting loads of stuff about the place where we are playing. The we like wiggle our fingers in the middle & then do a 3 way high five. This gives us the power to go on stage and put on a good show. If you are coming to see a new hope club show then expect there to be a lot of energy, we get the crowd jumping to songs. We get them singing, make sure you bring your singing voices and your dancing shoes to one of our shows!

Your EP has been out for a little over a year now; with the release of Crazy, is more new music coming?

NHC: Yes indeed, we released our EP ‘welcome to the club’ over a year ago now & we love that EP. But with the release of crazy we are so excited to be releasing new music that we love! So far people seem to be loving the song, we have seen that loads of people have been adding it to their playlists and streaming it all the time. The support from our fans and we cannot thank them enough, they are awesome. We have a few more songs lined up but they are a secret for a little bit long, so you’ll have to wait and see.

Finally, what do you want to say to your fans?

NHC: We would just like to say a massive thank you to everyone for your continued support, you are so awesome. It would mean the world to us if you could keep up the love with Crazy! We love you so much and hopefully we can be back in the US pretty soon playing our own shows.