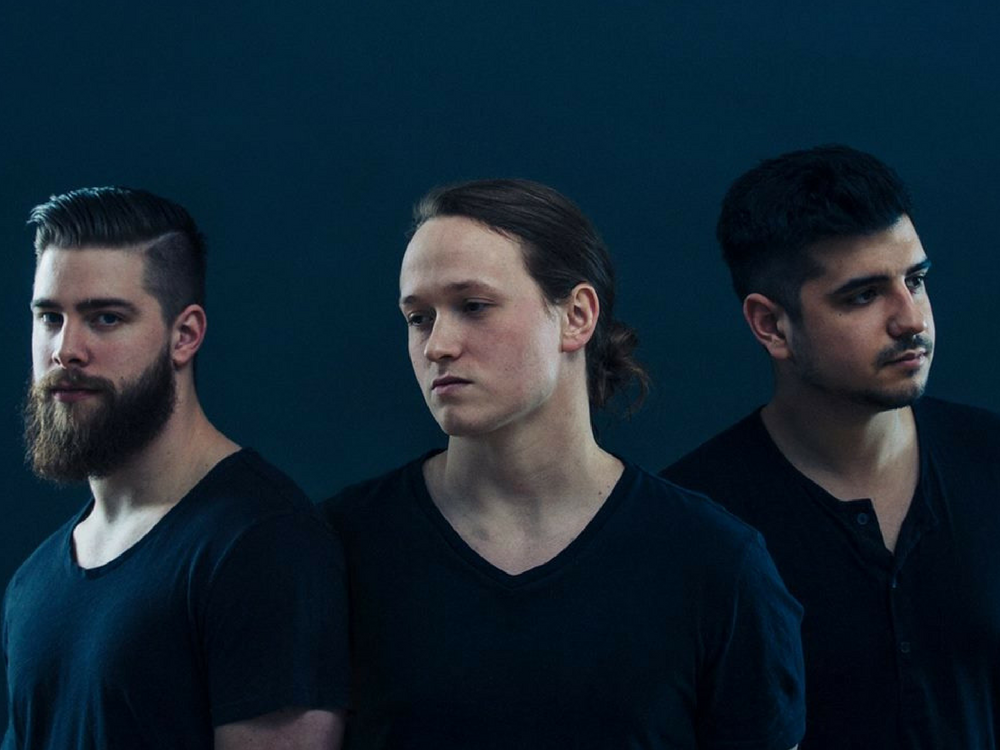 At the beginning of the year, I personally selected LOYALS as my top artist to watch for 2018. Quickly after, a high school friend of mine reached out to me because her husband, Dane, is the lead singer.

Signed to Tooth and Nail Records, which I think is a perfect match, LOYALS are set to release their debut album this Friday, February 2nd.  Consisting of members Dane Allen, Andrew Gomez, and Evan Thon, LOYALS are a trio to be reckoned with. Singles “Skyline”, “Aright”, and “Hold On” have been on constant replay for me and I am excited to present this band.

I met with Andrew Gomez, guitar and production, about the new album, and the beauty of the process. Following some discussion about As Cities Burn, the Nashville scene, and where we are in life, we talk about the band.

“The LOYALS thing has been a project since late 2014. We were growing up, getting married, and there was just something within us to try something new,” Andrew tells me. The members of LOYALS have been playing together since they were in high school, so this is no “overnight sensation” story.

He continued, “We spent a long time rebranding, writing, and while we were a different band at one point, this is a new project as a new band.” Andrew explains that Dane (lead vocals, guitar) starts with basic music ideas by completing lyrics and melodies before he sends that over to Andrew, who enhances the idea and develops the start of production.

From there they gather ideas that are sent to Matthew Arcaini, who helped produce the album and brought the songs together to make the album sound cohesive.

It is a team effort and process through and through. “We get the idea out, get some direction with it, and then we get it ready for if we were to play live.

Many of these songs have changed over the past three years. ‘Gone’ was started back in 2014 and sounds completely different on the album than it did then.”

Another example of this is in the track “Hold On”. An original vocal demo from Dane makes its way onto the track right as the bridge cuts in, and it is one of the strongest showcase of range he has on the entire record.

“This album was made in a time when there was a lot to be thankful for and a lot to be hurt about. We tried to create a sound that is the most tailored to who we are and what we like as possible.”

What is exciting about this album is while it was made over the course of 3 years, the songs have not only aged well, but they still push the envelope forward. There is an overall unique sound, vision, and album all together.

Over the scope of the 12-track album, you see a wide range of sounds and direction, but it is still cohesive. Andrew explains, “There’s the qualities, Dane’s voice, how we write harmonies, guitar tones, all of these small elements sound the same and develop a character."

The freedom in that idea is engrained in the tracks at their core. With time came the ability to choose the best 12 tracks for the album, and with what has been chosen it showcases all aspects of the band.

Watching the guys open up for As Cities Burn and Emery this past Saturday was an experience. At a show that doesn’t on paper match up with their sound, I start to hear people around me asking who the band is, as each track builds on building an energy in the room.

By the end of the set, the crowd was not only receptive but also accepting of the sound and set. Having listened to the album, I must highlight tracks you can’t miss. Their music is infectious, it is a feeling.

This is a carefully thought out record as far as the track list. I am a personal fan of intro tracks as I think they can really set the overall tone for the album. LOYALS blows this out of the park with “Face”. As synths roar and production builds Dane sings, “Look me in the eye it’s out now— yeah there’s no going back. I let a lotta words out of my mouth, oh just hear me out. You know I love ya.”

“Face” transitions flawlessly into “Mind Up”, a stadium filling full-length song that is the best way for you to be introduced to what LOYALS is. The first four tracks, “Face” “Mind Up” “Bail Out” and “Skyline”, establish a bloodline for the album. “Hold On”, with its R&B influence, speaks of a sense of yearning for something even if it has gone wrong. Written partly about the departure of a past member, the track was written at a time the band didn’t know if they would continue on, and what we got is one of the most sincere tracks.

“Heartstopper” and “To The Top” are destined to be live staples for the band as they tour. “IDC”, the sole ballad on the album, is a self-reflective, ambient song reminiscent of “Me” by The 1975.

Overall, I want to express the excitement of the sound and vision for this band. This isn’t just a good pop-rock album for 2018; it’s a great album in general, 4 years in the making. LOYALS debut self-titled album is out 2/2 via Tooth and Nail Records. The band has a couple of tour dates with Emery around the time of release as well as many other dates soon to be announced. Follow them on Twitter, Instagram, Facebook, and Spotify.