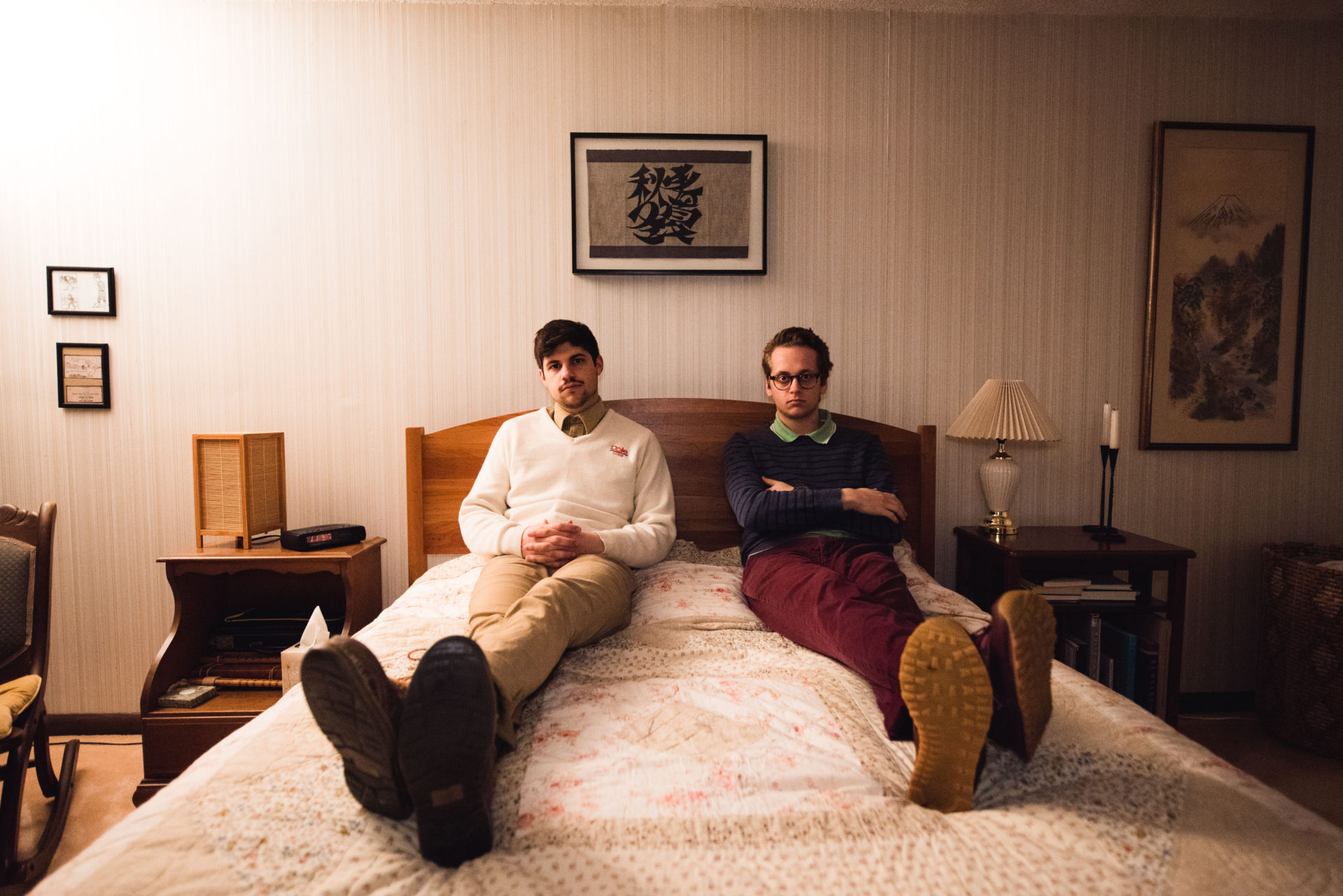 Mosie’s debut album Tangerine dropped during SXSW and the duo’s future funk jams are delightfully easy to move to with the combination of synthy vocals and energizing samples. Singer/songwriter Jesse LeVines and musician/producer Aidan Brody have created wicked musical hooks with surprisingly intimate lyrics that is sure to catch attention, even from those who aren’t in the electronic scene. Throughout the album there major switches between tempos that tosses you from one beat to the next without becoming tiresome. However, the standout feature is the way Mosie layers the human voice with a variety of melodic effects.

They played at Clearport, an industrial outdoor club in the midst of Austin’s infamous Dirty Sixth. The band that came on before served as background music for the the crowd as they loudly resumed their conversations and sipped their drinks with unaffected expressions; a deep fear for any artist at one of the most prominent music festivals in the country. However as soon as Mosie played their first song the eponymous title track of Tangerine, heads instantly began to nod and people pushed to the front to move to the disco light grooves.

I sat down with the two just before their show to discuss their fresh album and the process behind it.

So you describe your sound as the “Bratwurst Bump” what exactly does that mean?

Jesse: I always found a connection between music and food...Bratwurst Bump was a pretty good description of the kind of music that we put together. It’s fat, greasy, and juicy in the best way possible.

What made you guys come up with the name Tangerine for your album?

Aidan: We have a mixtape that’s out that’s called Soft Serve and a track was in included in the album [Oh! Frenchy] so the whole food theme was something that we started off with.

Jesse: Yeah, one of the tracks I had for Soft Serve we came up with for was “clementine” (which is included in the album), but liked the sound of Tangerine better.

When writing the different racks what helped put you in the moment?

Aidan: It’s kind of like a story with a chronological layout… so it’s an A to B kind of thing.

Jesse: It’s very close to a concept album on how the storyline goes.

What narrative were you trying to create?

Jesse: The first song is summer time is closing in, how you feel before summer and the beginning a new relationship…there are two layers to the album, the first is the feelings about getting over a relationship and the other is the events over one night when you’re going to a party. Taxi is like the drive to the party, Oh! Frenchy is going to bed and there’s a dream sequence over the next three songs. Marilyn is the nightmare then Three Prong Sing Along’s first line is “honey now it’s time to wake up” the opening synth is like the sunrise and the rest of the album is supposed to be the next day moving on.

Was this based on your personal life or is this just a medium for storytelling?

Jesse: Kinda both. It has a lot to do with like my life because I write about things that happen to me and it’s hard to do otherwise. I write my lyrics for me so mostly its a form of therapy so it has a lot to do with how I feel. When [Aidan] joined the project he was able to instrumentally bring out the feelings I wanted to which brought whole new dimension to it

How did you guys realize you wanted to create music together?

Jesse: We met at Berklee College of Music and were in the same friend group… we realized that we had a similar taste in music, wrote similar things and had a same sense of what we thought was good… but it took a long time to put that together.

Do you have a process for dividing up the work?

Aidan: He writes the lyrics and the instrumentals are things things that either he makes or I make. They’re pretty much split.

Jesse: The production is much smoother it’s like half and half and I write the lyrics and he does the mixing and mastering.

I noticed you did a lot with the vocals with various pitches and levels. How do you determine what kind of effect you want to use?

Aidan: Within the album there are different characters which represent perspectives on the story. So a lot of the voices are supposed to be a new angle on the same story being told. It’s all Jesse, but it’s supposed to be interpreted as different personas.

Jesse: I didn’t dive into the vocal effects until I started contorting my voice and trying something different which helped me express things on a much wider spectrum. I wasn’t comfortable rapping anything until I heard my vocals pitched up.

What musicians do you take inspiration from?

Jesse: Madlib and MF Doom are the biggest influences we have on this project creatively especially lyrically...it takes you to a whole different world.

Is there anything you find inspiration outside of the music world?

Jesse: Movies and stuff, there’s a few samples from Taxi Driver on Taxi.

Aidan: There’s some thematic stuff too that bridges that…

Jesse: Yeah, the whole idea of male insecurities and being able to deal with those in an appropriate way are also part of it.

What kind of Insecurities?

Jesse: Well in Taxi Driver he can’t get laid and goes crazy, which sounds funny, but he has a really hard time understanding what he’s doing wrong and doesn’t have a lot of support. But I think mostly it’s about me being able to get through my own relationships in a healthy non-hostile way…without many regrets.

Aidan, how do you approach trying to fit the tone to what Jesse is trying to achieve?

Aidan: I know what’s going on in his life, so I have a good connection with that he’s such a good lyricist so I know how to build the arc in a song or the vibe that we’re going for.

Jesse: He’s the best at listening. I think the reason that we work so well together is that he takes the time to listen objectively and see it as an entire art piece… it’s good that my lyrics connect to him, I just try to write from a really honest place. So when you write from that place it’s easier to relate to something that isn’t spoken about. Hopefully this album touches on some emotions that some men, and well everyone, bottle up inside because it doesn’t feel appropriate to share those feelings. But my hope is that this album can be unapologetic in expressing that.

Is there a particular concept that you feel like people should deal with honestly?

Aidan: I guess the album is relevant in the current time in that the songs are about female empowerment

Jesse: And female empowerment in a way that isn’t destructive against men. I feel like this album was big for me because I struggle with honesty and this is one place that I can be totally honest with myself even if it’s abstract.

So you guys have another show coming up for your album drop?

Aidan: We’re going to have the whole band here. Tonight we’re playing just the two of us, but we’ll have a full six piece band. I think more or less we’re all jazz musicians and anytime we play together it’s fun… we do a lot of things together some jazz, hip hop, R&B and rock.

Will there be any any experimental free jazz or improv with that?

Aidan: There’s no free playing in the show but there’s definitely a decent amount of improvisation

Jesse: The music is not terribly complicated but there’s space for that to be an option

That’s pretty different from what you have, how do they fit in with your electronic sound?

Aidan: As of right now it’s like 2 separate entities when it’s just the two of them I’m laying down tracks and samples but when there’s the six of us I play bass. So the arrangements of the songs are totally different a lot of what we play tonight will be pretty close to the record but when we play with the band it’ll sound pretty different but it’s still more or less close to the production. A lot of the songs started off as us playing in the live band.

For SXSW what were you looking forward to the most?

Aidan: The opportunity to open for Gramatik is amazing.

Aidan: But with any opportunity to travel it’s exciting. Well we have 4 showcases and 2 official ones so that’s been huge. We’re excited to be in Austin.

Jesse: This is my first time playing at a festival it’s amazing and weird

That’s a big milestone how are you guys feeling about that?

Aidan: It’s crazy, we’ve been working on it for a while.

Jesse: I still can’t believe where we’re at. We’re just trying to enjoy it while we’re here, not think to much about it.

Aidan: We were just making music for us, we had no particular goal we just wanted to create something

Jesse: We made something we’re really proud of and we’re just so fucking psyched that other people seem to like it too.