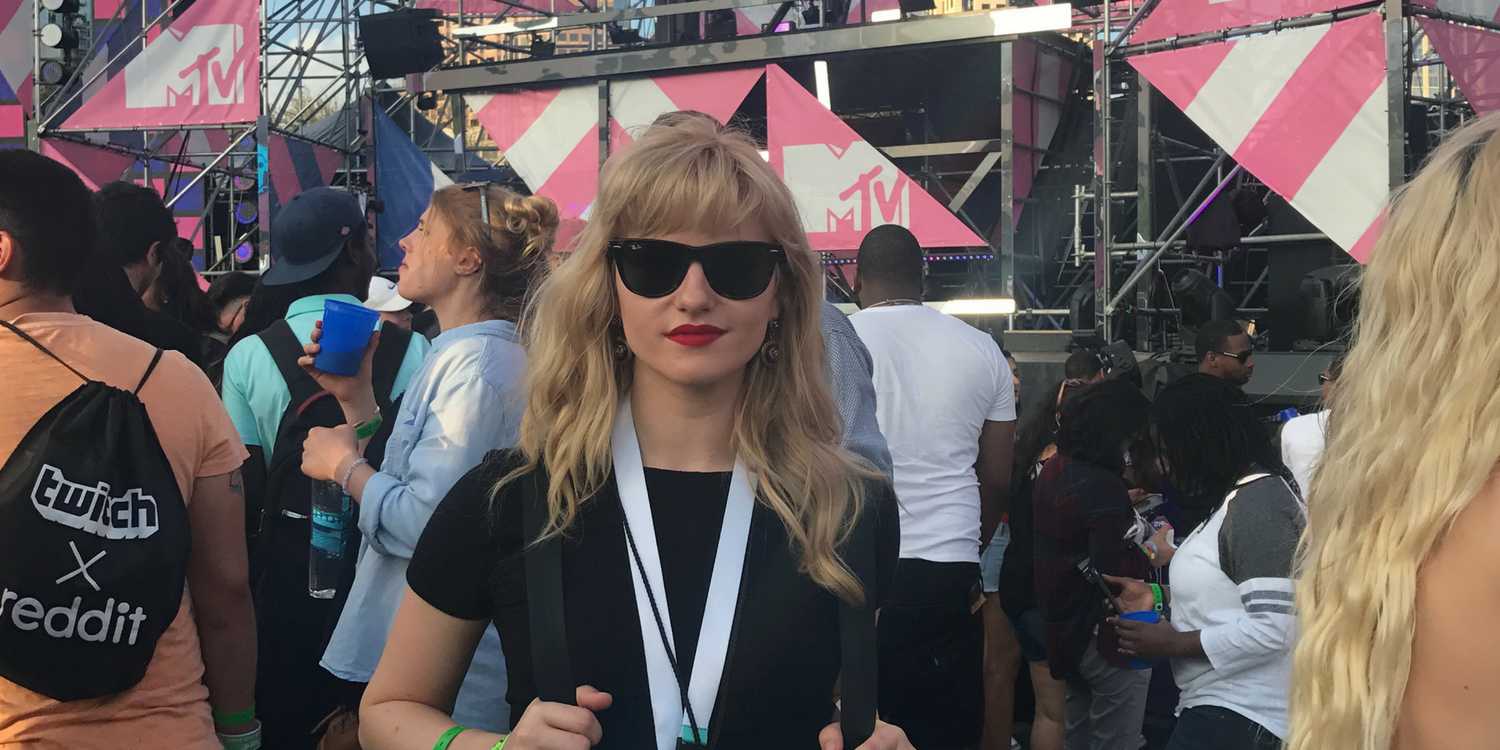 I was so equally excited and nervous for SXSW this year. I think it is hands-down the most important music event of the year. The bands that are performing aren’t your usual festival round-makers, they’re up-and-comers, and there’s just endless possibilities to meet new people in the industry. All opportunities await!

When Monday rolled around I let my anxiety fully settle in my body before I made my way to the press badge pickup. I heard the angels singing as the hot laminated badge was placed in my hands. This was it, all the months of prep work had come down to this. In all honesty, Monday was my least stressful day. It was time to #network, I went to the women in digital meeting, the digital journalism meeting, the women in music meeting. So many women, so many digitals, so many business cards. Monday night I met up with some pals to tweet about the Nylon party. GUYS THIS LINE WAS OUT OF CONTROL. I’ve never been in such a line. It was getting belligerent. However the decor and the music was exactly what I wanted from Nylon. The drinks were delicious and we enjoyed seeing Lizzo so much. We snagged a # pillow and bolted out.

Tuesday started nicely enough with some meetings. Then I went to listen to Kesha talk about cyberbullying. So wise, so insightful coming from a girl who brushes her teeth with a bottle of jack (wait, does this count as cyberbullying). Kesha has actually rebranded herself as the face of feminism in music, when did that happen? However, cyberbullying is terrible and it hurts a lot of young women. We should all be supporting each other and lifting each other up. In the vein of the day, I headed to the #bossbabes showcase which was easily one of my favorite events. The watermelon cocktails, the cool pop-up shops, Madame Gandhi. It was lovely. I stayed around to catch the Modern Outsider Showcase where I saw Quiet Company but my main show there was Walker Lukens who was kind enough to let me interview him on a distant street to get away from the noise. His show was dynamite, seriously we’ll have our write up out soon but he’s a smart cookie that loves Kanye, I am infatuated. After his set I went to find my friend Liz who was at the secret Juiceland show where Sleigh Bells was performing. My phone died. I got home at 3 a.m.

Today I went to some panels on music business reporting. I also tried to convince my friend Brian to take abstract photos of me, he declined. I got news that I had a deadline for a freelance piece due the next day but I decided to not think about it. I headed to watch some press days, where you can watch up and coming acts and decide if you like them or not, I headed to YouTube to interview JAIN. I listened to her on the way there and was immediately nervous because I thought she was so talented. I watched EarthGang then JAIN and was BLOWN AWAY. I cannot wait to get you guys this article, look her up now and let me know if you can stop listening to “Makeba” on repeat because I can’t. I met up with my friend Vince, and headed to check out the Viceland Bus. OH! I saw Chloe Grace Moretz walking around and was too nervous to ask her for a photo. She’s so cool. We went to Collide to see Betty Who, whose backup dancers maybe stole the show. Then Hamilton Leithauser made me want to cry tears forever. How does someone have a voice like that? I don’t understand. We actually had a nice time in the eBay lounge djing some vinyls and pretending to play music. I ended up getting home super late because I was busy flirting. I have feelings too guys, I need some attention. Gotta get that SXSRomance amirite? Now is when I remembered my deadline and stayed up all night writing this freelance piece.

I wake up on my laptop keyboard and favor myself some breakfast tacos and a giant coffee. I have to be at my interviews by 1 and get this article sent off. I head to Mohawk to watch San Fermin and Bleached, our girl KAYE is always amazing. I’m a little too fond of San Fermin’s “Emily”, can’t figure out why. Next I got to Schlotzsky’s to snag some snacks and bloody marys and talk about how Allie Teilz is not only my favorite DJ but my fashion inspo forever. Now it’s time for Big Machine’s Press Day. I interview Luke Wade who is the ultimate sweetheart and let me take funny photos of him. I stayed and watched some acts, then it was time to go to the MTV Awards. I take a small nap next to a bush while waiting for the press line to open. I shotgun a 5 hour energy and make my way to the crowds. This is my least favorite thing. Standing, in this crowd of drunks. I think about how maybe if my friends were here this would be fun. I wait for MUNA. I’m the only one here that knows every word to their songs. I feel like MUNA knows this and they’re all making eye contact with me. I cry a little when Katie rants about Donald Trump. I cry during most of their set. I watch PVRIS who kills it, then Bibi Bourelly who has such a dynamite voice and such power about her. I move away from the crowds to watch Lil Yachty where I find my pal Nina. We talk about how we’re confused about Lil Yachty but he seems like fun. I grab a bag of Doritos and head to Collide because if I miss BANKS I might die. I do take a small break to meet a friend for a sangria and dance to a cover band that played Whitney Houston. Now, it’s time to get emo watching BANKS. Her weird dancers in their cloaks slayed me. She asked everyone to turn off their phones during “Better” and it was one of the most beautiful and emotional performances I had ever seen and I wish so badly that I would see it again and have a recording of it. I watched in silence and awe during her whole set. I question my life at this moment. I get home and sleep harder than I’ve ever slept.

“After Friday I’ll feel better,” is what I’ve been saying all week, so here it goes. I stop by the Universal Showcase to watch Nightly but am pleasantly surprised by Albin Lee Meldau’s intense voice and early rock n’ roll vibe. Nightly slayed as usual. I question sticking around to see Hamilton Leithauser again, but I decide that my heart can’t take it so I head to the House of Vans BBQ to meet some people. I have an interview at 8 with Michael Blume and I am STOKED. I watch his show and damn, his voice is crazy. I got goosebumps. I catch Mondo Cozmo right before and he was just magical as well. I don’t think you can get much better than “Shine”, such a beauty. Next I’m booked for the WFNM showcase to watch Bridgit Mendler, Frenship, Powers, and Nightly again. I meet my friend at the Trap Nation show after. I was not fond of this. I thought it was trap music but it’s just a room full of douches. There was one guy who dj’ed with a trombone and I was like yes to this, but that’s how my night ended.

Two more interviews. I get to Empire at 2 p.m. and manage to catch Walker Lukens again. Hi Walker! I wave and head out to see morgxn. Loved him. His new music is so catchy and when he brought it all together with ‘home’ I died. We chatted after about new music and who he’d seen this week. Next I went to see my pals Quiet Company at Shady Grove, it was hot as hell out today. I had two margaritas to combat this. They covered “Friends In Low Places,” by Garth Brooks, a nice touch. We tried to make it to The Internet show but there was a miscommunication and we weren’t on the list. SO SAD, but I guess my diva attitude isn’t helping anyone. I decided to call it quits and head to barbs to dance away my problems.