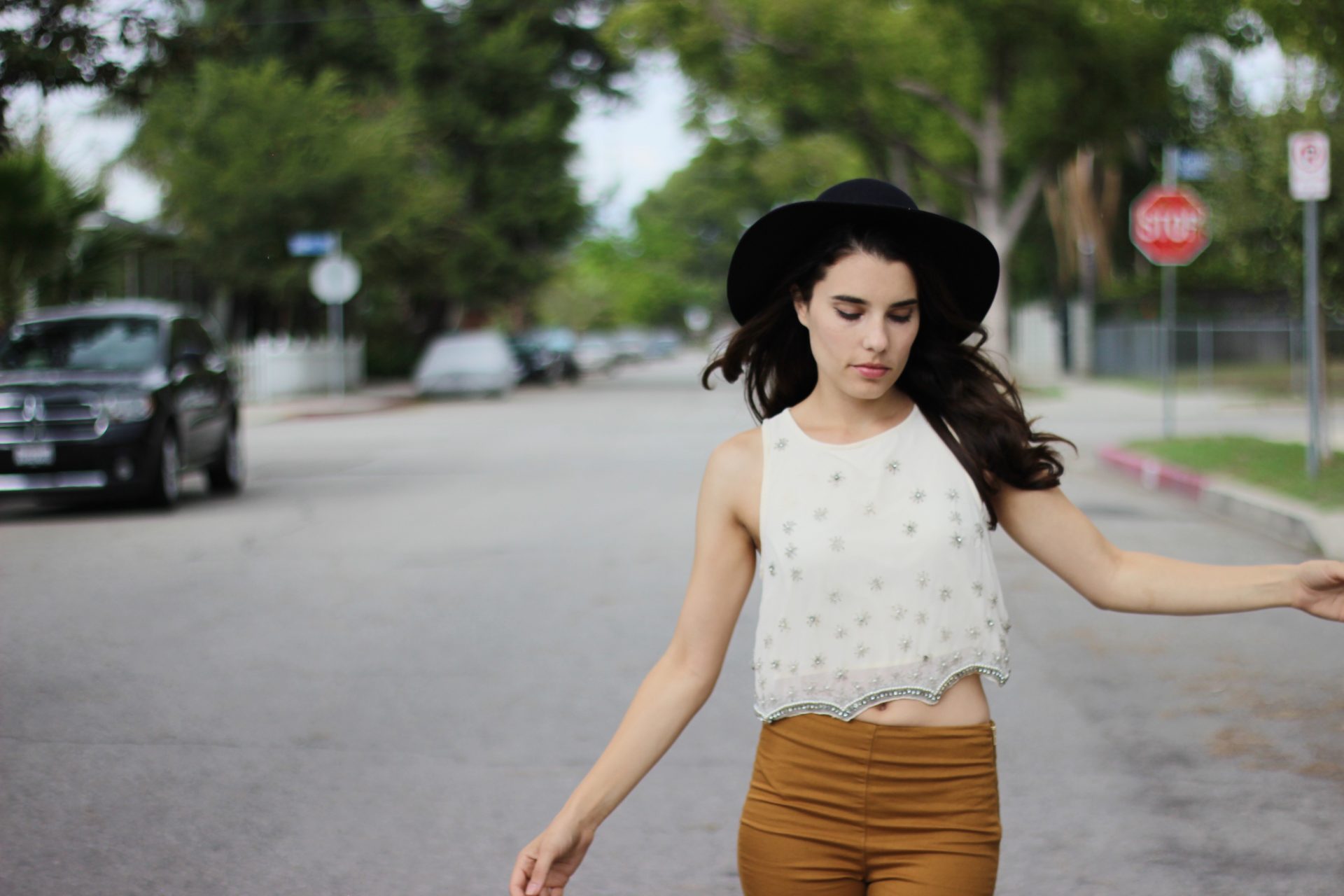 We are so excited to premiere the new Kris Angelis video for “Kevin Bacon” it is such a cute video and we loved talking to her. Watch the video and read about her songwriting process.

I started singing before I could even speak very well. There’s a home video of me and my twin sister pretending to sing opera very solemnly on top of a stair landing in our house. We wrote our first song together when we were about 3 about being cold and wanting to go inside and then I put that melody into a song I wrote later for my sister. I was in choirs in school and musical theatre summer camps and just liked performing and loved music so picking up a guitar and writing songs came as a natural step.

So many artists inspire me and influence what I write but one of the biggest ones has been Brandi Carlile and her band. When I discovered their music and got to know them and see how they conduct themselves as musicians and people, that’s when I got really clear about pursuing being a singer/songwriter. She and her band mates Tim and Phil Hanseroth (also identical twins) are wonderful songwriters, musicians, and singers but the awesome thing is they are genuinely great people. They have an incredible work ethic to go with awesome talent and they have used their success to help others as much as they can. They have a foundation that they raise money for every year to give back to their community and in May they released “Cover Stories” to celebrate the 10th anniversary of their album “The Story”. They got fantastic artists including Adele, Pearl Jam, Dolly Parton, and Kris Kristofferson to cover songs from the album and they are giving 100% of the proceeds to War Child UK to rescue child soldiers.

Also, my mom. She’s very smart and doesn’t take any crap. When she was in her early 20’s she was in officer training boot camp for the Air Force and you can get “promoted” within the camp. She ended up as the commander of the whole camp – a 5’2″ thin woman telling a bunch of men and women how to march. She said it’s because she understood it was like a game and she followed the rules and made her way to the top. That attitude of making whatever you’re reaching for a game that is possible to win and just taking the steps is invigorating.

Tell me about Heartbreak Is Contagious?

Heartbreak Is Contagious is a love story in four songs. It goes from hurt to sorrow to hope to joy and it’s the songs I wrote as I was going through those stages. The title comes from the first track and the idea that when someone gets their heart broken it can be hard to love yourself or let anyone else in and that can lead to other hearts getting broken but its about letting go and knowing that’s just a (albeit frustrating and painful at the time) part of life, that it’s not your fault, and we can grow from it.

You can get it for only $4 at krisangelis.bandcamp.com and other digital stores along with my previous albums and singles.

What was the inspiration behind your new video?

The song is “Kevin Bacon” and it’s called that because we wanted to write a happy song about the feeling at the beginning of love or anything that makes you feel good and when we came up with the line about dancing on the roof and cutting footloose with “kevin bacon moves,” we thought it would be fun to call the song “Kevin Bacon” and because I like hidden things and multiple meanings, I put a few Kevin Bacon movie titles in the lyrics.

The video idea initially came from my friend and very talented Director Damian Horan who did my “Not Your Fault” music video. It was to take the montage from “Footloose” when Kevin Bacon is teaching his friend how to dance and recreate it but with a little romance. Emma Bell directed and Michelle Magdalena Maddox operated the camera and the result is a fun, cute little story with some dancing choreographed by Devon Dionne and some beautiful golden hour shots that they added to the concept. Don’t judge the dancing too much; we’re not pros 😉 Its meant to be just like in the movie – friends learning to dance for fun.

The songs are very personal even though I co-wrote them with Morgan Taylor Reid and Alexander Cardinale (all except “Life Support” which I wrote solo) and that was kind of scary for me. I hadn’t really co-written before and it was vulnerable but ultimately very rewarding. We sat in Morgan’s studio for about 6-8 hours each day and laughed a lot and worked through the melody and structure first and then wrote the lyrics. That was also different because I usually write lyrics first. I brought the concepts to the table from stuff I had written and we shaped the chorus from the lyrical hook/concept. Each of the co-written songs took about 2 days to write and record and then Morgan spent a few more days polishing and making them sound great!

My process when I’m writing by myself usually takes longer because I’ll be going through something or trying to figure out a feeling and I just write in a journal as thoughts come to me and then I’ll sit down and try to piece them together and make them rhyme and pick our the melody on guitar or piano that goes with that feeling.

What is your best advice for young women?

Don’t worry so much about what’s trendy or what people will think of you. Do what makes you feel good and that good feeling and confidence will radiate out of you and people will feel it and respect you for it. Believe in yourself and other people will too. A while ago, someone in the music industry asked me ‘Are you good?’ (about my music) and that felt like an awkward question to answer and I looked awkward and kinda stumbled over an answer and he said ‘If you don’t think so, why should I?’ He’s actually a really nice guy, not a jerk. He was just trying to make a point and it stuck with me. You don’t have to be conceited or anything but confidence is important and the great thing is that if you’re doing something you truly believe in, even if it’s not what everyone around you is doing, you are going to have a fire inside you about it and share it so passionately that it will get noticed. It can be an uphill battle and you want to be fighting for something that really moves you.