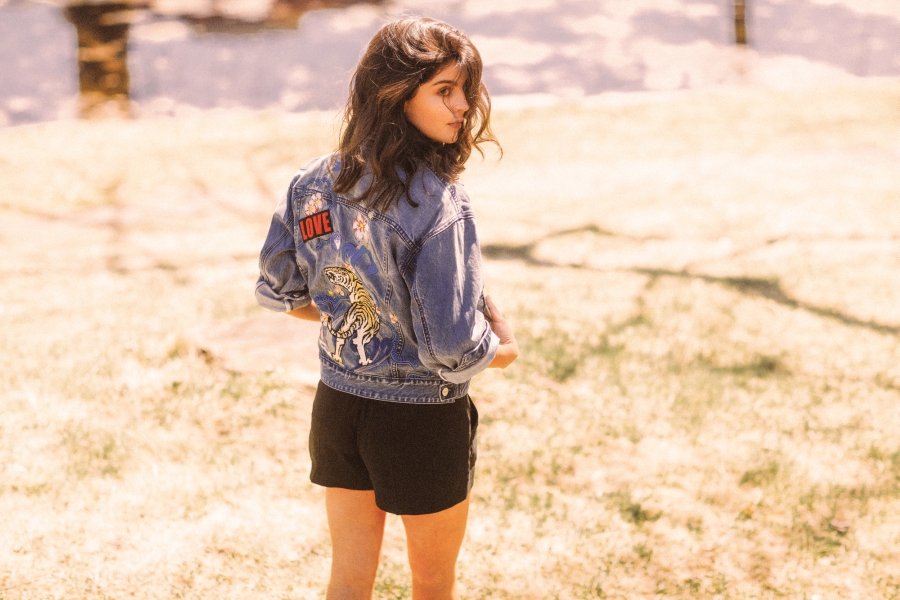 Nikki Yanofsky is crazy talented. Listen to her and tell me that’s not one of the most beautiful voices you’ve ever heard. Nikki has been singing since she was really young, since she could talk even, and she just begged her parents to let her perform. She takes her inspiration from great icons like Ella Fitzgerald, Aretha Franklin and Stevie Wonder.

She says, “I would go and perform for various causes, and in one of the audiences was the founder of the Montreal Jazz Festival here, where I’m from, my hometown. He asked me if I wanted to open up the whole festival. At the time, it was in 2006, I was 12 years old, and I said, ‘Yes, of course!’ because it’s a huge dream come true for me. That’s sort of how it started.”

Her throwback feel isn’t just for nostalgia sake, Nikki believe that sound is coming back into style especially with the likes of Bruno Mars and the late Amy Winehouse.

She says, “I think that there’s still some artists though that do that. Like Bruno Mars has so many great songs that sound like they could just be from different eras. A bunch of different eras, he doesn’t just stick to one, which is what’s so cool. Also, Amy Winehouse did that really well, which is why she’s, I think, one of my biggest influences. One of my favorites of all-time just because of the fact that when I was super young, that’s all I was really listening to, was like jazz and soul. Then she came along and she was this younger girl of my generation.”

One thing that has been important to Nikki is finding a mentor and having a good team behind her. Her mentor, who passed away, was Rod Temperton who wrote some of the best songs of all time. He’s known for his work with the king of pop himself, Michael Jackson.

She muses, “He was just so good. I tried to learn as much as I possibly could from him and we were really close, so. He’s always telling me that a good title is really important, you need to have something that captures someone’s attention right off the bat, even just when you’re looking at it, before you even hear it. I think that his songs are a sort of testament to that. Like Thriller, which sounds so cool before you even hear it. I always do that. I try and start with something kind of captivating and interesting or I’ll take an old saying that I’ve heard a lot.”

Nikki says, “It’s really important to have someone that you look up to that’s done something you would want to do, or at least someone that you can learn from, because it’s hard starting out on your own. I’ve had really good people around me and a really supportive team and everything. It’s invaluable to be able to learn some things from someone who’s already been there.”

One challenge that Nikki has faces is getting rid of the stigma associated with the word “jazz” so often, people don’t understand the genre or they think it sounds old, but this year it’s been a major influence in so many albums. Take Anderson Paak’s ‘Malibu’ or almost everything Kendrick Lamar puts out, jazz is coming back in a new and modern way.

She says, “I feel like a lot of people think of it as this older genre. You know, it’s kind of like old people. It’s just so not true, jazz is the foundation of all music, especially pop music. In a lot of ways it’s coming back, and people don’t even realize it because it’s sort of being fed to them in a way that’s more digestible. People don’t realize because it’s being put with this awesome beat, or a different vibe. I’m one of those people that likes a challenge, so for me it’s very fitting that jazz was sort of the root of my music. Because I like trying to break that stigma.”

The one thing that Nikki insists on, is that you have to know that music is all you want to do. If you have any doubts, it’s not the path for you. She says when people ask her what she would do if it wasn’t music, she can’t even answer, because there isn’t anything. It’s a full time commitment and you can’t just think you’re going to be successful if you don’t put everything into it.

She explains, “A lot of people think they like the idea of it because of what comes with it. There’s so much work that goes into it and you have to just love the process and love, really, the music. You have to just not to be able to picture yourself doing anything else.. When you think like that, that’s a good sign. And then, if you have that and you can answer, “I don’t know.”, to the question what would you do if you’re not in music? Then go for it and really get your own. I think that hard work beats talent when talent doesn’t work hard.