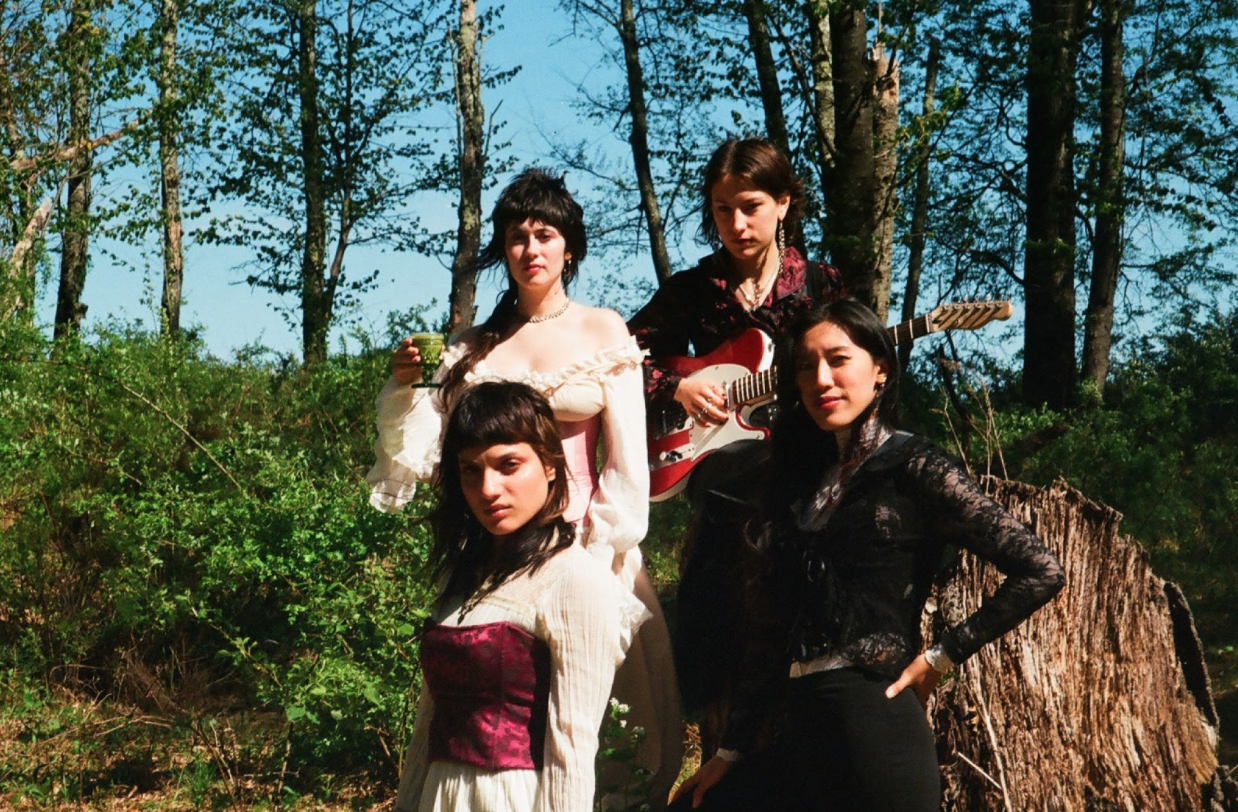 While most of us were cooped up in our homes watching Netlfix and trying out fruitless hobbies over the last year, Sedona was hard at work. The last time spoke was in May 2020 before the release of the Soft Machine music video. In the last year, she has released one full-length album, five subsequent singles, and six more music videos (plus a lyric video.)

So, they’ve been a little busy.

Sedona has always hit the mark when it comes to her videos whether it be an 80s workout and porn-inspired video (More Love,) a home video style compilation drenched in nostalgia (Soft Machine,) or an angelic vintage wedding gone wrong (Chapel of Love.)The newest video for her most recent single, Bullseye, takes a more whimsical approach with foggy rural views, a magic potion, and some sick Renaissance-inspired costumes.

Just like last time, Sedona called me from the road, but this time it was on a trip from Brooklyn to New Jersey for her boyfriend’s family reunion. After our usual long-winded catch-up, we launched into talking about the inspiration for the video, last-minute script changes, the return of shows, and tick bites.

Your videos are always so great. How did you come up with the idea for the Bullseye video?

Sedona: I've always wanted it to have this kind of Victorian mythical element. Just because when I hear Bullseye, I think of archery. I just thought it would be a cool concept to run with. So I reached out to my friend Madeline [Leshner] who is an amazing director. She shoots a lot of stuff with her boyfriend, Zach [Stone]. He's a director as well, but he shot this one and she directed it.

I sent them a few songs. And I was like, “this is the one that's coming up next.” And she was in love with it. So, I told her my original kind of vague idea of, I want it to be some countryside vibes with Renaissance clothes and all that. And she was like, “that sounds so cool.”

*Spoiler Alert* But I would love to hear about the decision to shoot Merilyn and then bring her back. (I am a Merilyn stan by the way)

Sedona: Well, we wanted it to have a narrative element so we were thinking, “what should the story be?” and we kind of made it into a bit of a narrative around an accident. Then we save Merilyn, with the potion that Tia finds and Claire uses her lullaby guitar, to bring back to life with its magical force. We just go on this kind of mythical journey to save her from the arrow accident.

It was really, really fun to shoot and build up the concept because I feel like in the Chapel [of Love] video, Claire was the main character with me. And in this one, it's kind of a combo of Merilyn and Tia. Everyone has their own moment. I mean, even in the Chapel [of Love] video, everyone had a specific, iconic role. So, I think that's really fun to keep that all up.

What made you decide to shoot Merilyn specifically though?

Sedona: Well, we were originally going to have it be Tia and Merilyn was going to be the mythical potion master. But Merilyn actually had to leave earlier, and head back to the city for another engagement. So we were like, okay, she has to be the one that gets shot because whoever is the mythical person has to stay longer and go into the stables and find the potion. So it was really just a timing thing.

The location was beautiful, where did y’all shoot it?

Sedona: We shot at my boyfriend’s aunt’s farm in Jersey. We shot it a few months back, but it's so cool to see it all come together. It was so much fun. We were just in Jersey the whole weekend. We'd shoot and then come home to Harry's family's house and were just hanging out and then we’d go back out again.

There's actually a bit of a funny saga about the shoot. There were like hundreds of ticks. So so many ticks. I think all of us had a tick on us. A couple of people got bit but everyone's fine. It's funny because when you do get bit by a tick, it leaves a bullseye. So we're on set thinking this is really really weirdly coincidental.

That is funny. I've heard that it's really hard to remove ticks. Like you're not supposed to just like pull them off. Is that true? Also Lyme disease?

Sedona: Yeah, you have to burn them off. Zach had one on his ear and Madeline had to get something hot and then put it on the tick and then kind of burn his ear. It was crazy. We were all going to get tested [for Lyme Disease] but they said that if you get it off within 24 hours of it being latched on it more likely than not can't get you sick. So if you're around tick just know that. And if a bullseye shows up, then you should probably go to a doctor. It's crazy how many ticks are were. Literally, so many. We were in the most tick-infested area.

You just need to get some opossums out there to handle it. Anyway, back to music, you have been playing some shows recently and have a few more on the books. How has that been?

Sedona: I'm really excited to start playing more and more shows. I've missed that so much now. Every time someone asked us to play a show, we're foaming at the mouth like “yes yes yes.”

You guys got to start booking bigger venues.

Sedona: I know. It's funny, too, because at the show last week, which was our first show since COVID. All of our friends didn't get in because they were like, “We didn't know it was gonna sell out!”.

Any plans to tour?

Sedona: I want to tour so badly. I'm dying to do it. We just need an agent, manager, all that type of stuff. But we really need just need an agent to help us book a tour. But yeah, we've been talking to some friends in different projects about how they do it. And if they'd want us to play with them, so yeah, I'm really excited.

I saw you were all in California recently. What was that for?

Sedona: Yeah! We went in May and we recorded an album’s worth of songs that we all either wrote together, or I wrote with a producer and brought to the band for them to play on. So that was amazing. There are some songs we need to record still, but we recorded twelve in LA and we did them live. So essentially, we need to go through and listen to every take we did of each song and then say “oh the keys are best from take five” or “this guitar from take two is the best”  then piece them together and then see what we have to do next. So it's very like-- we're in the middle of a lot of different things, which is exciting, but also overwhelming.

I would love to know what you’ve been listening to lately?

Sedona: Um, a lot of Smashing Pumpkins, The Mamas and the Papas, Gigi Masin, Erykah Badu. There are some others but yeah. I’ve been listening to them a lot.

I am a writer and musician born and raised in the Texas Hillcountry. I learned how to be a fan from attending 15+ The Maine shows from ages 14 to 21 and tumblr fan pages. I feel most at home at small venues with floors sticky from stale beer and have a borderline unhealthy love for sad songs. I maintain an equal level of fanaticism for Elliott Smith and Harry Styles. I would also die for Phoebe Bridgers.