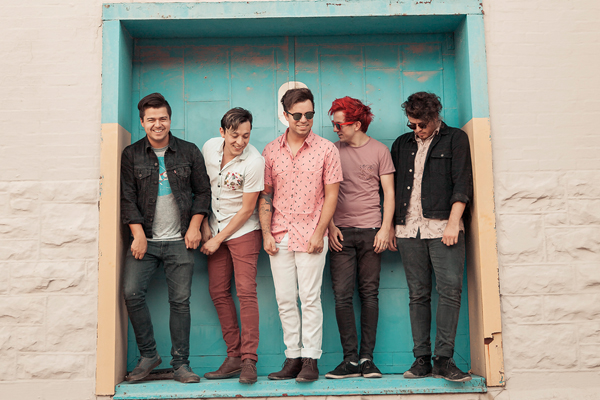 Shadow of Whales is unlike any other band I’ve seen in Austin, and I’ve seen a lot of bands. I remember I was at a night at local-hang Cheer-Up Charlies when this colorful, energetic band caught my attention. In a scene that seems too pretentious for its own good, Austin music tends to lack one element that I look for, actual fun music. That’s exactly what Shadow of Whales makes, music that’s colorful and exiting. It reminded me of being in high school in the best way possible.

The band formed back in 2013. Josh says, “We all had different backgrounds and came from different bands but formed into one.” They all knew each other from past experiences but said they were better together.

As soon as they formed they were opening for an event called Camp Freddy. JD adds, “Opening is a generous phrase but Camp Freddy is essentially huge acts performing and we were playing at the same event.”

One thing they focus on is making sure all fans are appreciated. JD adds, “We put a focus on converting strangers into fans into friends.”

That can really help them standout in the Austin scene, which can be pretty competitive, there’s so many bands and so much talent, but the competition is friendly.

Josh explains, “It’s harder to stick out but we have a lot of friends that are eager to help each other rout. There’s so many bands so there’s so many connections. There are some bands that keep to themselves which is fine too, but overall there’s a lot we’re friends with.”

However, when I bring up how hard it is to gain national exposure from a musical bubble like Austin, the guys give me a resounding “yes” and talk about the scene.

Jeremy says, “It’s competitive in that sense, but that’s anywhere. It’s hard to grow outside of your hometown.”

Texas is a whole other problem just because of how large it is. Compared to the East Coast it can take over 14 hour to cross the state entirely. Which means you’re just touring the state or you’re making a huge commitment.

JD explains, “I do feel like Texas has some unique challenges because the state is enormous. If we want to go on tour, it will take us one day to get out of the state.”

The band has been getting a lot of traction out-of-state though, their genre just translates well to other markets. They don’t sound like an Austin band. Chris says, “Our genre kind of sticks in Austin. A lot of alt-rock bands come to Austin but they have to be nationally known.”

One of the standouts to me, is when a band can really nail a cover, and I don’t mean make it sound exactly the same but when they put their own twist on it. Enough to even make it sound like they made it themselves. Shadow of Whales did this with Charlie Puth’s “Attention” and it’s so unique.

Josh says, “The song came on the speakers, and I thought it would be a cool song. We thought ‘Why not?” it was hard to make it standout from the original because you don’t want to ruin the song.”

JD adds, “Charlie Puth is a great producer and he has a great sense of composition, so we wanted to make it our own while honoring that source material.”

I love a little alt-rock flavor to a pop gem. All the guys have different advice for young musicians. JD says it’s important to master your craft but be prepared to handle the business side of things too, he says, “Good songs sell themselves, but if you want to be a musician you have to treat it like a full-time job.”

They also emphasize that it’s not for everyone. Josh says, “Know what you want to do and your purpose with the project, and pick the right people to be a part of it.” Jeremy adds. “If you know in your heart of hearts that it’s what you want to do don’t give up for anything.” Chris says, “Be open to criticism and don’t take things personally.”