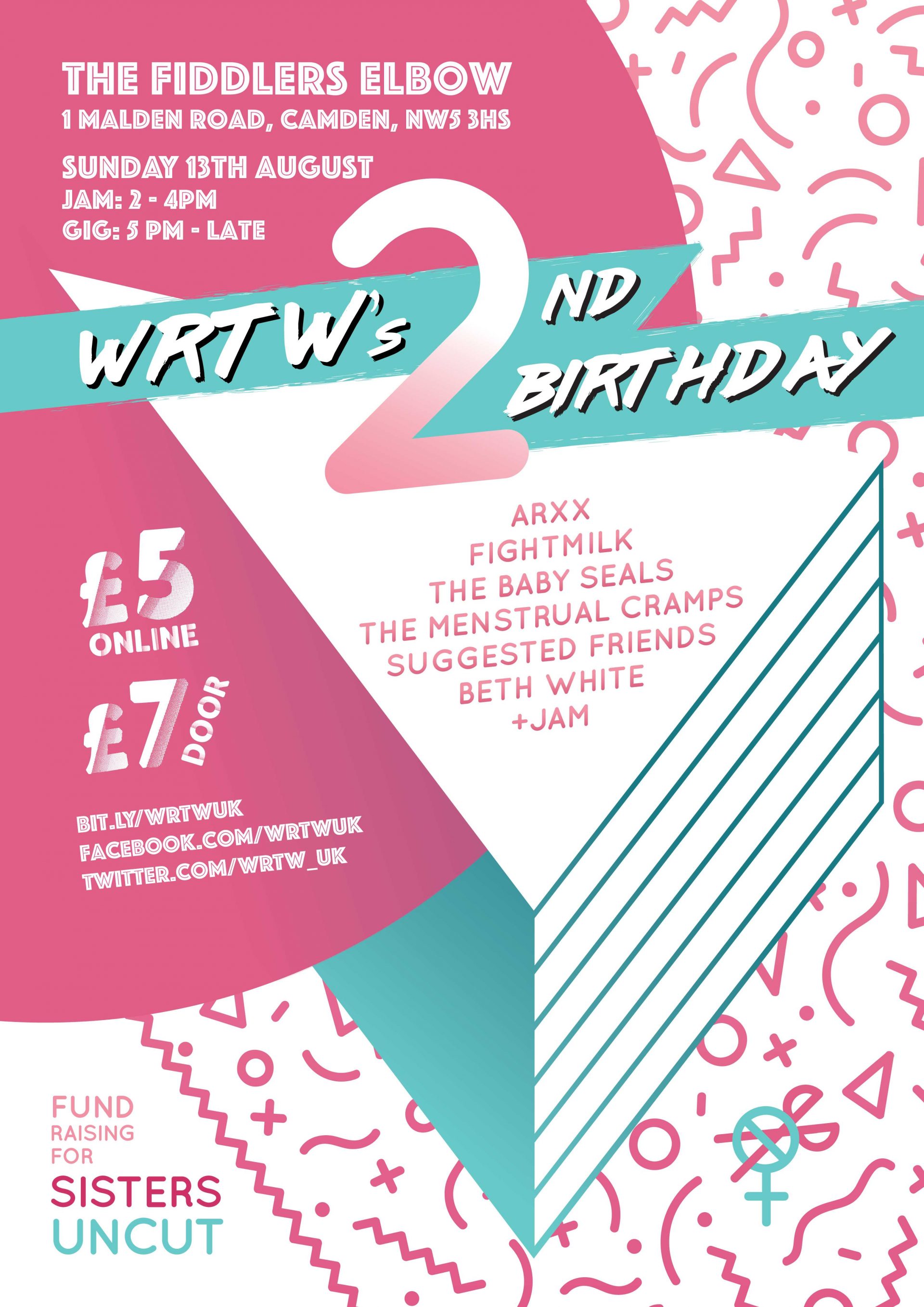 Who Run The World is London’s first promotions company exclusively showcasing women in music. They’re celebrating their second birthday this year on August 13th with a killer lineup featuring ARXX, Fightmilk, The Baby Seals, The Menstrual Cramps, and Suggested Friends. I talked to founder Beth White about the idea behind Who Run The World and why it’s necessary for women to support other women.

Honestly? I remember being a young child watching Britney Spears’s ‘Oops I Did It Again’ and thinking it was the greatest thing ever that someone could be on the TV for singing (in an iconic red catsuit, no less). I remember wondering how she got to be in the TV, and that’s basically why I started singing, and eventually picked up the guitar to be a songwriter.

Who Run The World was born out of my own experience of underrepresentation playing gigs; I found my existence at shows were a novelty in London’s underbelly of the acoustic/open mic circuit. I went on to discover a night called Femrock as a university student in Brighton – the atmosphere of a woman-led night was so welcoming, supportive and joyful, I felt I had to bring that to London when I returned home.

At the time, it was also born out of necessity; I’d been a jobless graduate for a really long time and felt pissed off at the lack of opportunity for women in music I was experiencing. I was feeling a whole lotta rage about joblessness and my own music career, and decided I’d do what I wanted and start a company running gigs.
I didn’t have any experience of it, but figured after my fair share of shitty gigs musician-side, I knew what not to do.
After experiencing what I did, I thought it was unbelievable there wasn’t a night specifically catered for women, so I decided to try it myself and see what would happen. Little did I know that 2 years later, Who Run The World would host 107 acts in 41 shows.

Who Run The World’s policy is that no matter what age, size, race, or even genre you are; as long as an artist is talented, they have a fair shot at playing a show. I’ve showcased genres such as Rock, Punk, Metal, Indie, Electronic, Acoustic and Blues, and am open to accepting bands with men in them, too – so long as they are inclusive of at least one woman doing her fair share making awesome music for the band.

Why do we need a promotions company specifically for women?

When you’re talking about London’s grassroots music scene, I am sorry to say it’s not the most welcoming place for women, just wanting to play any show they can get. Breaking out into the unknown, most of these places are dark and dingy, and they can be very intimidating; especially when line ups are literally dominated by men.

By starting a promotions company specifically for women, it was my hope that a certain level of respect, support and appreciation would always be present at every Who Run The World show. It’s about solidarity, and the freedom for women to be artists in their own right without fear of scrutiny over their image, technical know-how, the size of their chest, or whether they’re at only at the show “with your boyfriend?”

Why do we need more women in the music industry?

I’m not sure it’s a case of more women so much as more opportunity and more visibility for women. There’s an incredible pool of talent out there, and running Who Run The World has taught me it would be so easy for every London promoter to offer these opportunities if they just put the effort in – great acts really aren’t that hard to find. I simply do not understand the justification bookers have for filling line ups with guys. It’s not about tokenism either; if you take any genre of music, you will find a great band that has a female drummer, singer, bassist, guitarist, keyboardist… whatever you like. It’s just fact.

In such a limited space, i.e. a show with 4-6 slots, why not offer one to a great band that’s inclusive of women? It’s so frustrating to see artists be denied the opportunity for seemingly no damn good reason.

What have been some of your biggest challenges starting Who Run The World?

Definitely putting on shows for the first time! I soon overcame that though, putting on up to 4 shows a month at one time.

I would also say overcoming sexism too – yes, I know how to tech my guitar and amp; no, I am not just here with my boyfriend; yes, I can get sweaty and scream and shout and be hella inspirational and no less “lady-like”.

Honestly, I’ve also struggled with making explicit reference to artists & bands being women too; there are some who say putting “female-fronted” in front of “band” perpetuates the idea of it being a novelty. I’ve come to terms with this however, as I think it’s important – particularly in the early stages of London’s burgeoning women-led grassroots scene – to make explicit reference to the lack of opportunity for women specifically, and therefore booking women specifically. We have had to carve out our own space and make our own opportunity. Nobody else was ever going to do it for us.

What are some of your biggest accomplishments?

Who Run The World was granted its first monthly residency during its launch, at Apples and Pears Bar in Brick Lane. That was a brilliant feeling; I felt as though I struck a chord (lol, music pun) with the venue management, as that meant the ethos and principles of the night was corroborated. Women do need more opportunity to play, and that was granted on the first go.

Who Run The World was also Soho’s first monthly live music night for LGBTQ women. This was especially important for me as a gay woman; Soho is stereotypically seen as the place to go for LGBTQ folk, though somehow queer women are very limited in their choices of nights to go to in the area. This seemed so odd and so wrong for an area like Soho in a city like London, so to be able to create a new night for queer women was incredible and, I felt, absolutely necessary.

I’ve also felt really proud of the alternative approach women-led promotions brings to London’s grassroots music scene – a staple principle is of collaboration, not competition, which you tend not to find at most other grassroots shows. Most London promotions companies are out to rip bands off with a practice called ‘pay-to-play’ (where promoters charge artists for their tickets in advance to sell on to fans/friends), and there’s a real lack of support between fellow musicians too, as bands tend bring friends along to see their set before all rushing off to the bar or back home. At Who Run The World shows however, audiences tend to come for the whole night, stay to see every band, meet new friends and be a part of a strong and supportive music scene.

This principle rings true for other organisations that have sprung up too – I constantly look to help promote other London nights by Loud Women, We Can Do It Promotions and Gigslutz as examples. Who Run The World has also teamed up with Loud Women and MINT Events in the past for one-off shows; the support that women bring to each other is a very powerful thing, which I have real faith in. It’s extremely affirming and wonderful, and something that carries me in occasional moments of despondency about some of the challenges I face with running gigs.

What are your goals for the future?

I’ve mentioned this a bit, but it would be great for women-inclusive bands to just be “bands” – for women’s existence in grassroots music to be more the norm and not seen as a novelty. I would love to see nights like Who Run The World and others encourage more women and girls to play, as they can be assured there will be a space for them once they feel ready to showcase their talent.

As far as Who Run The World goes, it would be great to put on bigger shows for unsigned artists in future, so that they can reach bigger audiences with their music. This is something I always wanted as an artist, to be properly supported by promoters who book me and who wanted me to succeed.
Who Run The World is yet to put on a festival, but this is something I would definitely love to work on in future.

The future for Who Run The World looks promising, as I won’t ever apologise for showcasing women exclusively or stop doing it, so long as women are made to feel unsafe or like they don’t belong at shows. Who Run The World has become my motivation; it’s that little extra something special that makes my life great. It brings me so much joy to discover new artists, and to offer whatever support I can to show bands that they should keep at it.

What’s your best advice to women who want to be in the music industry?

Go for it! Be persistent, do your research, network, and importantly, be yourself. I think we all have ideas of what we should be and that what we are now isn’t good enough – I’m here to tell you, you definitely are, as you are.

If you want to be a music journalist, write about every band you love and send your work everywhere. If you want to be a promoter, make those connections with bands you want to showcase and bug every venue until somebody takes you on. If you want to play, pick up an instrument. Learn from your mistakes – and accept that you will make them time and time again. Take criticism constructively. Don’t apologise for doing what you love. Be active. Like I said, nobody is going to do it for you.