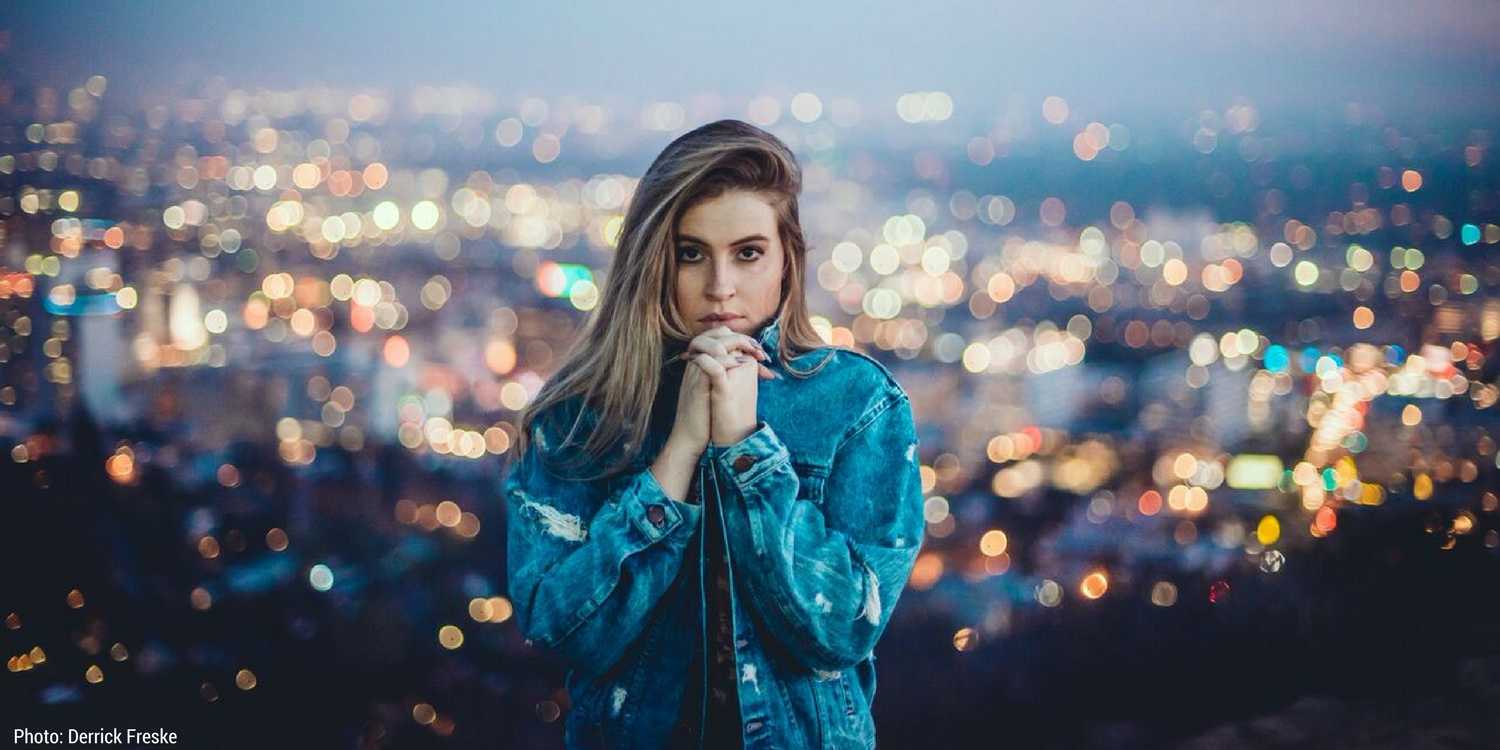 FLETCHER is one of the hottest up-and-coming pop acts right now. Her songs are so catchy and vibrant and they just make you feel like you can take on the world.

We sat down with her at Hangout Fest after her dynamite set, she’s wearing double denim and has braids in her hair. We’re talking about how sweaty we feel and how great the turnout was for her set despite the early slot. She says, “It was such a good vibe, the audience sang the lyrics back to me so I knew there were real fans and it’s the best setting, you have the beach right there behind you.”

FLETCHER started voice lessons really young, and even though she went through phases of different instruments, singing is what stuck with her. She started writing songs when she was in her early teens and t’s been her passion ever since. “There’s nothing else that I’d want to do,” she says.

A lot of her songs really speak to young women. She says, “I feel like there’s a lot of female empowerment messages in there which is important to me. I writer the melodies first but it’s different every time. It’s melody then lyrics and it ends up turning into a cool story.”

Now those messages of empowerment are engrained in FLETCHER from her strong mother. Unlike a lot of musicians who say their family wished they’d been a lawyer or doctor, FLETCHER’s parents have always been supportive, especially in terms of her music and her dreams. Her mother was a constant source of motivation.

She explains, “Not everyone is as lucky as I was, my mom always told never to take anyones shit, there was never a dream that was too big. She is such an independent and strong person and having that kind of role model in my life. She really fostered this female empowerment sense since this early age. Maybe not as many women have a strong support system and I think its important for girls to lift up girls. We’re all doing badass things in the world and i think all those things deserve to be recognized.”

One of those songs is her dreamy “Wasted Youth,” and the video is equally is hazy and beautiful. It really does feel like eternal youth and the aches of growing up.

She sings, “We got a lot of time to get it right, it feels good to mess it up, maybe don’t think about it
going late night who needs a fantasy, buzzing on Hennessy, class like a Kennedy, and you’re my nation, my revolution, living right now, well you can call it disillusioned.”

She explains, “Wasted Youth was a really incredible video for me, it was really liberating, there wasn’t actually plan I was at Dockweiler beach in Los Angeles and we were just filming really cool content. My friend is video director and he just said “this could be so cool with the colors and it’s so gritty” and we went and did it.

FLETCHER was at NYU at the Clive Davis Institute and she spent the last four years living in Manhattan, but she’s made the move to LA and with that comes new music. She says, “I’ve been writing about the experience and moving and leaving family and friends and coming to LA and learning to love again and love myself and be in a totally new environment and figure out what that means and where my place is.”

Her advice to girls wanted to be in music is to be yourself. She adds, “Especially living in the social media generation that we live in. It’ so easy to get caught up in what you’re supposed to look like and the content you’re supposed to put out and and how your songs are supposed to sound. Don’t follow trends, don’t try to catch up with what everybody is doing. It’s about catching the next wave. The shit that is coming next are the people that are unique and different and making something that doesn’t exist in the world. I think that is so important to channel whatever that is inside yourself. Do you and that will radiate to the world.”

Watch her super dreamy video for “Wasted Youth” and we guarantee you’ll fall in love with her.