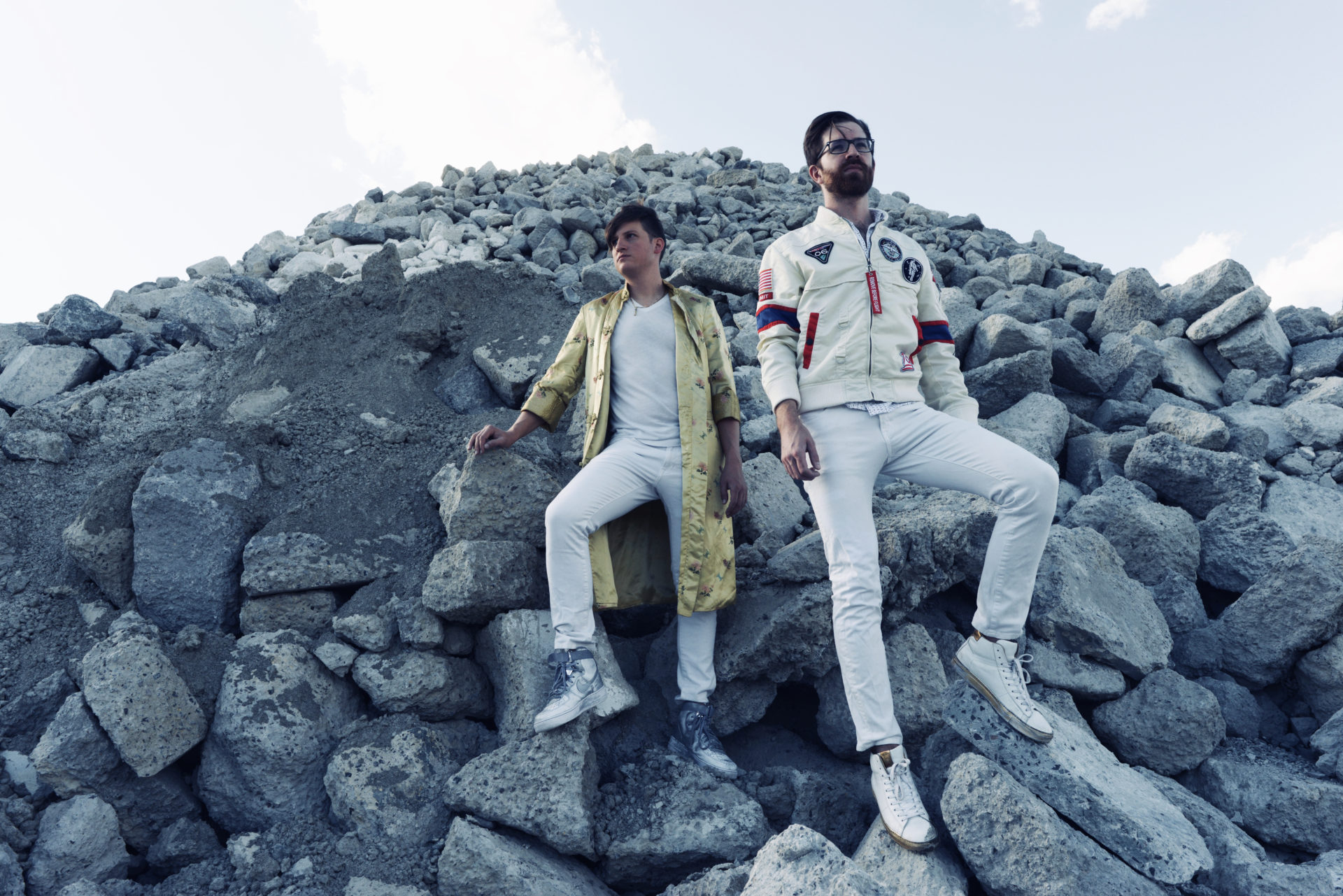 Anyone that knows me knows that I’m a sucker for a good music video. Usually watching one turns into fifteen and I end up down a rabbit hole of discovery. No truer example of this came in 2014, when I came across a video from The Wild Honey Pie’s channel called “By My Side” from Great Good Fine Ok. The lead singer Jon Sandler and keyboardist Luke Moellman instantly had my attention. The falsetto, the kimono, and the first verse had me hooked. Fast forward to 2018, the Brooklyn-based synth-pop duo has been a staple in my Spotify playlists and in the music scene as a whole.

While consistently delivering quality singles and EP’s over the last five years, Great Good Fine Ok have established themselves. This summer the duo released “Change”, which already has over 3 million streams on Spotify alone, and its accompanying music video. Their latest single, “Touch”, is out now, with the second part of the music video as well. Meant to be watched together, “Change” and “Touch” follow an intergalactic story about how we can’t escape our destiny. Thanks so much to Jon for speaking with us about the new videos and their upcoming EP this fall.

I have to tell you I’ve been really into you guys since I found your video with The Wild Honey Pie back in 2014. That was slightly after you guys got started, how did the two of you start working together?

Jon: So basically I was doing a solo project at the time. My piano player lived with Luke, and we developed a friendship just from me going over. A lot of times we would talk about working together but usually just in passing. As the story goes, we ran into each other one night and said we should try to write together. He actually sent me some music that night for what came to be “You’re The One For Me”. I wrote the lyrics and it came together super quick. We didn’t really have intentions of it being anything more, but as we showed it to friends and other close people, they all responded to it well. It lead to us working together more, writing more songs, and starting the band.

So I come from a chorus background, I have to know when did you learn that you had that falsetto?

Jon: I’ve been singing my whole life, even since I was a little kid. I’ve been in choir every year I could be, traveling chorus, musicals, and choirs in college. Here’s the thing, I’d never really sang in full falsetto and for some reason the night I wrote “You’re The One For Me” I was inspired to sing the entire thing in falsetto. There were no intentions for us moving forward like I said and it has become a part of our signature sound. I didn’t realize people thought I had a good falsetto, I learned that it was something I had.

Pretty soon after that you got to work with St. Lucia too.

Jon: That was a cool thing. We had that song “Something to Believe In” and there is this low part I was singing. I felt like I was imitating St. Lucia and I mentioned that maybe he should sing it. We reached out, and he was super nice and did it for us, which was awesome.

Collectively GGFO has released multiple singles and EP’s, is there a reason for that?

Jon: The climate of the industry right now, releasing singles seems to be the best route. This Spotify culture where people don’t want to digest too much at once, so the songs as singles get their chance in the spotlight. We have more flexibility of when to release songs and how often as well. We’ve released singles and when it feels like the singles are more like a package we put them into an EP. We’re about to do that this fall as well.

Speaking of that, is “Change” the first single?

Jon: So “Change” is technically the first new song from the EP, but we’re going to put “Find Yourself” on there as well, which was made first. “Change” was the first on this body of work though in our mind though.

Obviously the new single and video for “Touch” just came out. How did the idea for these videos come about?

Jon: So the video for “Change” and “Touch” is a continuing story through both videos. We just signed with Ultra Music 6 months ago and this guy Eddie, who works there, wanted us to work with this creative director Sam Mason. We put our heads together about what a dream video would look like. At the same time, randomly, this company in Atlanta, RiTE Media, expressed interest in working with us as the production company. We ended up in Atlanta for five days with a huge forty person crew and it was just a passion project for everyone. We’re super proud of how it came out.

I’m a big fan of music videos, helps connect the dots. I appreciate the thought process for these.

Jon: We take the visual representation of our music very seriously. It’s great to see that with our singles as well.

I got to see you on this summer tour with Smallpools. What’s the fall look like for Great Good Fine Ok?

Jon: We’re taking some time off to record more songs and decide what’s on this EP. We will probably tour after that, but we toured a lot this past year. The release for the new EP will hopefully be late fall.

TNN: I do have to ask. When did the kimono come into the rotation for you?

Jon: It came into my life before our first show. I was soul searching for the visual representation for this band and our music in my mind. Like what does it look like? I’ve always had fun with fashion and unique cool things. I was walking through a thrift store and I saw the first red kimono, from the summer camp video, and it was just hanging there. It clicked. I knew that’s what our music looked like. I wore it for a bunch of our first performances. It then turned into a fun obsession and I own more than 100 and it’s just what I feel comfortable performing in. It’s what makes me feel in tune on stage.