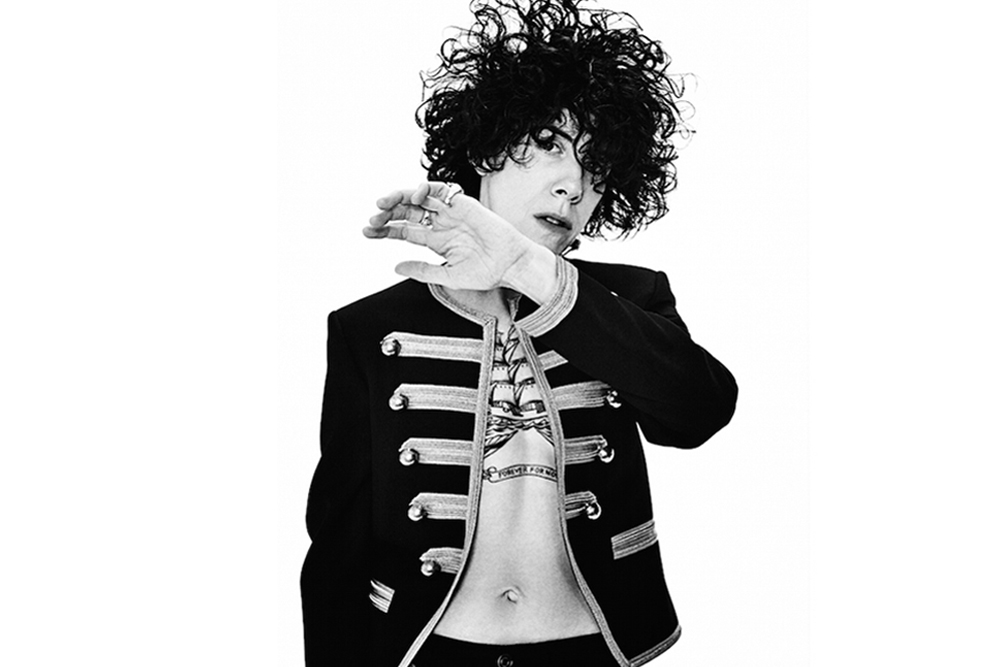 I was beyond nervous to talk to LP, I’ve been almost obsessively listening to her album Lost On You since it came out. I say this without hesitation, it is my favorite album this year and it would take a lot to knock it down. I was so excited to see her at Hangout Fest that I made my friend wait with me for two hours in the burning heat at 2 p.m. because I just HAD to be front and center. It was an amazing performance. LP delivering those crazy vocals flawlessly, twirling her microphone in the air and casting a spell over the entire audience. I was mesmerized.

I’m late to the LP game, I first heard her album when I was studying for Hangout Fest and as soon as I heard “Lost On You,” I broke down in tears, there’s something so earnest and heartbreaking about that song. I became addicted. I sent it to all of my friends. I couldn’t stop listening to it. I looked at every line, every lyric, dissecting the meaning. Her entire album is top to bottom flawless. The cinematic “Muddy Waters” has a hint of gospel and really shows off her incredible voice. “Lost on You” is a desperate, poetic masterpiece. “When We’re High” is one of the sexiest songs I’ve ever heard. “Other People” has the loveliest vocal lines and whistling, but personally, my heart lies in “Tightrope.”

Somehow she’s turned her personal pain and heartbreak into songs that feel like they’re speaking directly to you. You can sense the emotion in her voice with every note and every lyric. Her songs are embedded in my mind and they haunt you, you won’t be able to stop thinking about them. Even now I can close my eyes and get chills when I hear those melodies.

“I knew I could sing because I went to summer camp my whole life and people told me I was a good singer. My friends really pumped me up in summer camp,” LP laughs. For someone hailed as one of the best voices in the game, she grew up not even thinking a career in the music industry was possible.

She explains, “When I was a teenager I didn’t really want to be a doctor like I had been raised to be. It was pounded into my head that entertainment was not something you can do. I moved to New York City and I was playing with a lot of bands just trying to find myself and I started writing songs…which I had never done. I was kind of floundering, working in restaurants and bars, and I started getting some traction.”

LP got her first major label deal in 2006. That’s where she started her career songwriting. She says she wrote in the neighborhood of over 140 songs. She’s written for Rihanna and The Backstreet Boys, but there was no record for her. That label ended up pulling her in different directions and she was dropped, she had to reevaluate everything, her entire career.

She muses, “I started wondering what the meaning of life was. Then a publishing house signed me as a writer and it thought, ‘Cool, I’m not washed up in the music business I’ll just be writer now.’ I thought that would be easier. You don’t have to be in front of the camera and no one is telling you how to act. You don’t have bad gigs and good gigs.”

LP didn’t give up on her original music, she started writing songs for herself and playing ukulele, and even though it was just for fun, her management still believed in her. That’s when “Into The Wild” and “Tokyo Sunrise” came out, songs that have defined her career, but it wasn’t smooth sailing yet. Warner Bros was going through a lot of changes.

She says, “The whole regime of Warner Brothers switched up and looked at me and thought should we keep this person or not. I played them “Muddy Waters” and “Strange” and “Lost On You” and they decided I wasn’t worth keeping.”

I can’t imagine hearing that song and rejecting it, but she didn’t lose hope on the album or her songwriting.This is around the time that LP actually started writing “Lost on You” it was in a shaky period in both her professional and personal life and it stirred up all of these emotions.

She says, “I was on tour opening up for Kodaline, and the line ‘lost on you’, came into my head and I brought in one of my co-songwriters. Everything with Warner Bros was going under way and I was seeing this woman and something was really wrong there too, it hadn’t revealed itself yet. I was surrounded by the enemy, the bad feelings. I had to figure it out and ‘Lost on You’ was born out of that heartache and confusion. I thought this woman was the one and I don’t really think like that. I’m not desperate to find the one but she was important to me. I like that phrase “lost on you” and the vocal was the same as the day I wrote it.”

She sings, “Wishing I could see the machinations, understand the toil of expectations in your mind, hold me like you never lost your patience, tell me that you love me more than hate me all the time, and you’re still mine.”

Even though the song is about a breakup, she wrote it about a year before the relationship was final. The woman wanted an open relationship and LP thought it was an interesting idea, but it ended up being a long way to get hurt. That’s what the song “Other People” is referencing.

She says, “I thought to myself, I’m not an angel. I’ve cheated and it hurt me as much as the other person. When she proposed the idea, I thought maybe that’s the answer. I feel like a lot of people were talking about that, at least in our circles. She didn’t tell me that the whole year, she had someone in the wings that she wanted to be with, so this was just so she could have this relationship in another format and that’s not fair. I didn’t even know the rules. So what are the rules you see someone across a crowded party and say, ‘I want to fuck them,’ or are you having affairs. I don’t really do that. It’s so rare that I’ve had a one night stand. That’s how I met my girlfriend now, we spent like three nights together in a row and I dumped the other chick.”

LP’s openness is so refreshing. It’s also what makes her an inspiring writer. Her songs are so personal but at the same time they’re universal. We talked a lot about “Lost on You” but you can see her transparency throughout her songwriting and her performances. There’s just this warmth about her.

“I’m super emotional anyways. I try to view every song with a lot of emotion,” she says. “Coming from a very tumultuous parental situation, my parents were constantly fighting and even though I know they loved each other, it was really bad. My mom finally left him and died the following year. Their relationship was super crazy and I had a front row seat to that and surely I didn’t know everything because I was a child. I wanted to write something that felt heavy in that way. I wrote about the love-hate that can be involved in every relationship. Even if you’re staying with someone for a very long time. You can be with someone for the rest of your life that has disappointed you in very deep way but you still forgive them and love them. I wanted to convey that.”

That emotional vulnerability has paid off for LP. She ended up finishing the song before the relationship with that woman was even over She explains that the song works so well because there’s so many levels to the phrase “lost on you” and it translates different for so many people. You can never fully understand what’s going on in another person’s mind.

She says, “One of the hardest things in relationships is not understanding what that person is feeling at the time. You can’t really get in someone’s head, even someone you’re super intimate with, you can’t see everything from their perspective. Communication is one of the hardest things for me. ‘Lost on You’ is kind of plea for that, I feel like I don’t always communicate properly with my lovers.”

With the ups and downs LP has had in her career, she tells me you have to see it as a journey.

She says, “Don’t doubt yourself. Don’t doubt why or how you’re doing it. Find the authenticity wherever that is on the bell curve of sexuality or identity, and just go for it. Experiment with your voice and your writing and write as much as you can with as many people as you can or by yourself. Songs are like steps and each step brings me higher and higher to where I am. Don’t be afraid to be weird in any way. You never know what you’re going to stumble on. Don’t get bogged down in veering off on the wrong path, you’ll get back. You just can’t see it at first. I hate that phrase ‘the journey’ but that’s what it is.”

If you haven’t listened to LP’s album do it now. Follow her on Instagram: @iamlpofficial and watch the video for Lost On You. I also threw in her Conan performance in case you thought I was over exaggerating her live show.