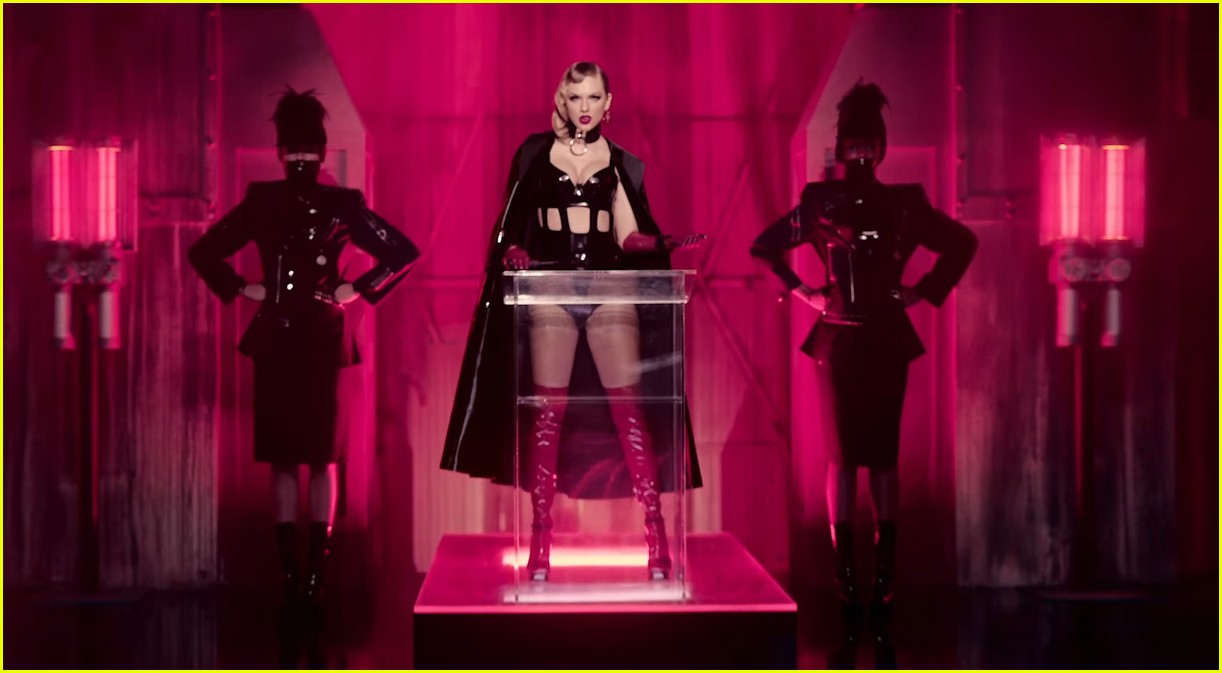 “Our Song” was a cute one. The Fearless and Red albums were my jams. I loved them and felt good about Taylor Swift herself. Circle back to the MTV Video Music Awards for that moment in history where that one thing happened with that Kanye West guy and I felt bad for her. I still loved Kanye, but I felt a bad for her. Then the Kanye/TSwift drama continued. Are they cool? Are they not cool? Oh they’re cool again! Wait. Kanye has a line in his song and suddenly they aren’t cool. Kanye confirmed something about Taylor, Taylor denied it, then Kim K gave video evidence proving that it was true. Now Taylor has made herself the victim. 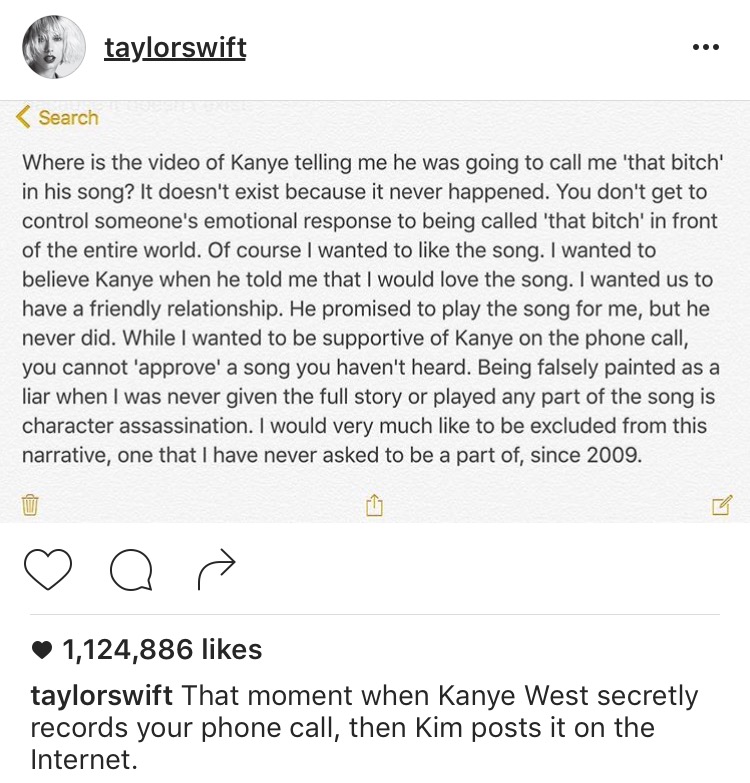 “Where is the video of Kanye telling me he was going to call me ‘that bitch’ in his song? It doesn’t exist because it never happened. You don’t get to control someone’s emotional response to being called ‘that bitch’ in front of the entire world. Of course I wanted to like the song. I wanted to believe Kanye when he told me that I would love the song. I wanted us to have a friendly relationship. He promised to play the song for me, but he never did. While I wanted to be supportive of Kanye on the phone call, you cannot ‘approve’ a song you haven’t heard. Being falsely painted as a liar when I was never given the full story or played any part of the song is character assassination. I would very much like to be excluded from this narrative, one that I have never asked to be a part of, since 2009.”

At that point I was officially over it. I was over “America’s Sweetheart” who really was a “Regina George in sheep’s clothing” (via Katy Perry). She was talking about being “falsely pained as liar” and “would very much like to be excluded from this narrative, one the [she] never asked to be a part of…” yet in the past and present made songs about guys and girls who allegedly did her wrong. You didn’t stop to think that maybe they wanted to be very much excluded from your one-sided narratives, Taylor? No?

Fast forward to the recent rebirth of Taylor Swift. She scrubbed her social medias so spotless that even the Pine Sol lady, Scrubbing Bubbles and Mr. Clean themselves would have absolutely zero complaints. It’s a sign, something was happening and we didn’t know what it was. Then, one day, a picture of some sort of tail thing appeared on her Instagram. A few days of anticipation and it was confirmed to be a snake.

In case you didn’t know, after Kim exposed Taylor the court of public opinion went to town on her social media by commenting snake emoji’s on her posts. The audience was catching on to her games and wanted a witch to social media burn. It got excessive, but it was entertaining to see.

Using a snake as promo for your rebirth when people used snakes against you as an insult? I thought it was smart. It was like Taylor was saying, “You think I’m a snake? Well guess what, I am. And I am taking this moment to rebrand myself.” But I also thought, “Ugh. Here we go. Taylor Swift is making victim music again and capitalizing off of others feelings about her.”

After clearing my mind to go into this process, I listed to “Look What You Made Me Do”. Before I listened I thought about what I hoped for with this song, hoping that it would really prove me wrong. I wanted TS to be this badass and show me that she was the snake everyone was making her out to be. I wanted fire and adrenaline and instead, I got nothing.

Yes, it is catchy and I will be humming it in about a month but I just can’t get behind it. I wanted to but it doesn’t do it for me. All of her promo for this was branded as “the new Taylor Swift” and it fell flat.

Newsflash, this song is the same old Taylor Swift who makes the same old pre-teen revenge pop music. So much so, that I can see it becoming the anthem for a pissed off six-grader who didn’t get invited to some girl’s sleepover.

Honestly, it sounds like what a newly-formed combat boot wearing high school girl band wrote after they listened to one Alanis Morrisette song from Jagged Little Pill. Not something that should be coming from a well-seasoned 27 year old.

I wanted a real “New Taylor”. Not a calculated old Taylor. I wanted one who is unapologetic and goes for better insults than “I hate your tilted stage” for her jab at Kanye West. The guy has a slew of problems and she really could have went there but she didn’t, which tells me that she still wants to be America’s likable princess by not offending any of her fans with the same issues as Kanye.

For real, she should have talked the mess and been honest but she’s too afraid to make the moves and say the words that would really make a true transformation. Is she not a woman scorned? She had an opportunity to burn the town down to the ground and did she do it? No. She took an unlighted match, covered her body with temporary tattoos, put on edgy burgundy lipstick and took the bad kid photos for Instagram.

And she only did it for the likes.

I understand that this is the first single from her new album. Maybe the rest will actually surprise me. My advice to Taylor, do some real stuff for “the new you”. Otherwise, stay the old you without the “look at me I’m a punk/syntho/pop princess” gimmick. It’s trash.

Also, the line “Taylor can’t come to the phone right now because she’s dead” is the cheesiest corniest thing I HAVE EVER HEARD IN MY LIFE.