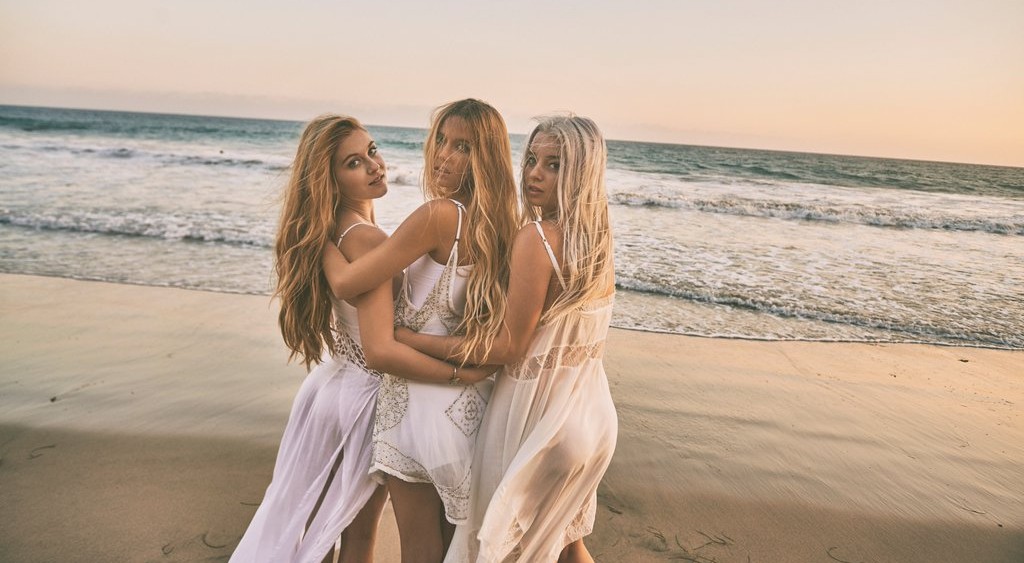 I’ve followed Bahari for quite some time so when I heard they were performing at Beale Street Music Festival, I knew I had to get this interview.

And as soon as Sidney mentioned her cheese tower, I knew this group was going to be enjoyable. I met the California-based (well, kind of – Ruby’s from Kenya while Sidney and Natalia are from Los Angeles) trio backstage and we talked food, humidity, but mostly music.

The group comprised of Sidney Sartini, Ruby Carr, and Natalia Panzarella took the stage and everyone was drawn to their long blonde hair and nearly all white clothing. I mean, they looked like perfect beach goddesses.

The girls performed their older songs like “Wild Ones” and “California” while giving us a sneak peak of their new material. The group also channeled some serious Fleetwood Mac vibes with a flawless cover of “The Chain.”

Their producers, Rock Mafia Studios, who has worked with Selena Gomez and Miley Cyrus, approached the girls a few years ago and asked if they wanted to perform together. Really, the rest is history. Everything just kind of fell in place for the trio.

Ruby says, “In a way it was, but we all have different influences. We all love music and we wrote what came out of us and it all worked.”

The group has even opened for Selena Gomez on her Revival tour, but ultimately, they trio would love to headline their own tour. “I don’t know if I have an end goal. I just want to keep making more and achieving more. There’s always something bigger you can do,” Ruby tells me.

Speaking of bigger, the girls plan on releasing new music before the end of this year, so stay tuned for that. As far as collaborations go? Ruby says no one is off the table, including Kendrick Lamar. Sidney chimes in and says Major Lazer and Natalia adds J. Cole.

You’ve probably heard their song “I Miss You” with EDM duo Grey. Sidney told me Grey are brothers and since she’s felt like sisters with Ruby and Natalia, the chemistry was instant. Since this collaboration, Natalia tells me it’s helped paved a way for their new sound.

“For our second EP, we became more mature with our lyrics. We wanted to find a different sound, “ says Sidney. Natalia follows up and tells me, “We just grew up and slowly transitioned to alternative pop and found it fits our sound.”

If you haven’t heard their collab with Grey yet, check out the video and get hyped for their new tunes coming very soon!