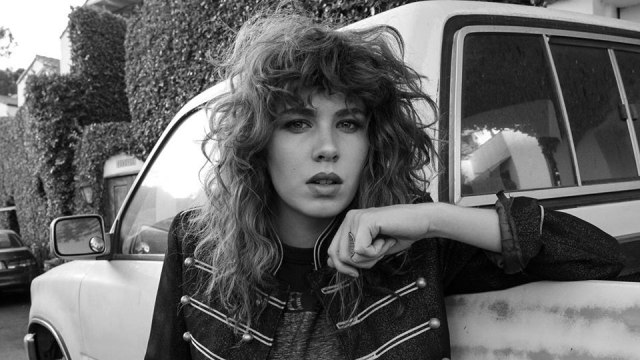 The weather didn’t look great for Grace Mitchell’s show. It had rained all morning but it had subsided for the moment. There was no one I was more excited to see on Sunday at Hangout Fest. “Now” is one of my favorite songs this year. The hard rock edge combined with 80s synths make it so instantly catchy.

“We were psyched but we were so thankful that the weather gods permitted,” Grace says, while we’re looking at the sky a little worried. The festival had a couple of problems with their sound and the rain had not helped, but Grace made light of the even joking with the audience. “Who’s the best act you’ve seen so far…trick question it’s me,” she laughs. She danced interpretively to “Jitter,” stretching out her hand to the audience and singing, “Write my name on your hand, take my number ladies man,” as she shuffled across the stage. I lost it when I heard the intro to “Now,” and when the crowd begged for “NoLo” she gave it to them.

Grace grew up in a small town playing coffee shops and open mics, but she lived next to a man named Richard Swift who was a record producer and a sort of indie-influencer who recorded her first acoustic demo. That demo got widely circulated in LA and before she knew it she was driving to LA to meet with labels and record new songs.

If you’ve been a long time Grace fan, you’ve noticed her progression since ‘Design’ and ‘Raceday’ she really found her sound and you can just hear the progression through her work. Both EP’s were so well reviewed and have a hint of genuine vulnerability mixed with the idea that Grace is more self-aware of herself than most of her peers.

She says, “It’s taken a lot of different evolutions because when I began I was trying to identify what the different sounds would be and now after doing a lot of work and trying to figure out what the sonic identity is of my vision, we just decided to marry electronic music with acoustic instruments and now it’s coming together in a cohesive way.”

You can really hear that in her recent release “Now” and “Cali God”, she’s really found something unique. Take her captivating lyricism in “Now,” she sings, “I could sign my life on the dotted line, maybe get some shit that just wasn’t mine, in the end, I’d do it every time, take my mom on a vacation, get myself a fancy ride, put vanilla ice on my cherry lime, give myself a break on the other side, in the end, I’ll know I did it right, got so many friends who tell me I’m so pretty all the time.” It’s those clever and unique lyrics that catch my attention every time.

Grace definitely rocks hard, her entire set was non-stop aggression and passion and it just felt so liberating. Watching her rock out to “Kids (Ain’t All Right)” was one of the hardest hitting songs I saw that weekend. Even her demeanor on stage is so cool. It’s a constant reminder to me that more women in rock aren’t getting the recognition they deserve.

“I think there are some that don’t get the recognition they deserve,” she says then she pauses. We’re sitting next to Warpaint in the media tent and she whispers, “Look who we’re sitting next to,” she continues, “These women are paving the way for a new generation of female rockstars and I’m psyched for that.”

But Grace is paving that way too. She’s hitting the festival circuit pretty hard and she wants her audiences to know that her festival performances aren’t the usual. She says, “Changeover time is so quick and I feel like audiences at festivals don’t know what goes over in changeover time because we don’t have a soundcheck. We have to get on stage, have everything prepared, and immediately play. So a lot of bands will have technical difficulty and things don’t run as smoothly.”

Even so, I think Grace’s ability to deliver the set that she did, under the pressure and difficulties presented, really shows her talent. Her ability to joke with the audience when they were having technical problems, it all just translates so well. The girls next to us at the set were even telling us how they discovered her just walking by and being lured in by her music, some of the people at her set just had a playlist on of all the acts at the festival and just had to come see her they loved her music so much. That’s the one thing people tend to forget about festivals, it really does give the artist exposure, just being on a playlist or being between sets. You never know who you’ll pick up.

Grace adds, “They’re walking to their favorite bands and see a side stage and go check it out especially with us because we’re so loud and aggressive. It’s funny I never know who in the audience has been a long time fan and who’s a new fan.”

Grace is a pillar for modern women in music, she says her best advice is to make music your main goal and don’t have a fallback. She says, “Never have a plan B, I invest everything, my whole life into my career. My whole life revolves around this and sometimes my personal life suffers, but I don’t think of anything else,” she stops and adds, “I think that if your really want to pursue music, especially as a woman, you have to give your all, because men get off easier. We live in a patriarchal society where men are given things and women have to work harder for the same recognition.”

PREACH GRACE PREACH. In all honesty, this interview was one of the highlights of my year, I cannot wait for whatever Grace puts out. Follow her on Instagram, Twitter, and Spotify. Her new single “Cali God” is beautiful.